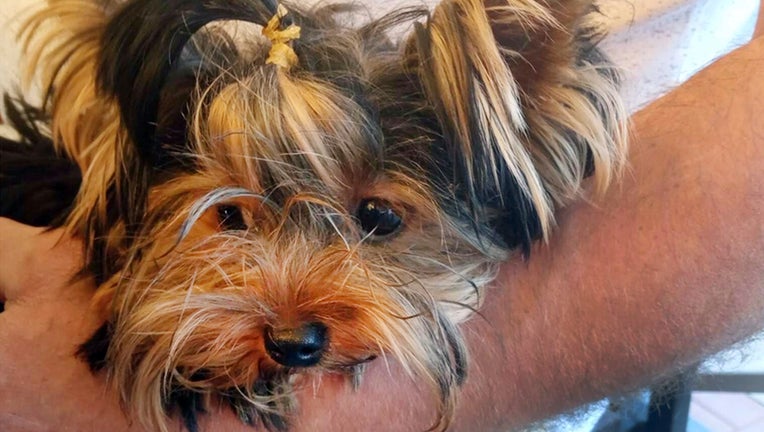 This undated photo provided by Elena Kurakova shows Uti-Puti Knopochka, a Yorkshire terrier that was among 11 dogs flown into the United States from Moscow via courier on Sept. 8, 2020. (Elena Kurakova via AP)

NEW YORK - It may not rate as an international scandal, but the death of a Yorkshire terrier in U.S. custody is fueling a messy legal battle over the importation of a group of purebred canines imported from Russia.

The dog died in September at a private facility at New York’s Kennedy Airport used to hold animals from overseas that are denied entry to the U.S. by federal officials. The news was heartbreaking for a woman who says she was the owner-in-waiting for the female Yorkie.

“It’s been really, really rough for me to deal with her death,” Rachel Hobbs, of Dayton, Ohio, said in a recent interview.

The Yorkie, named Uti-Puti Knopochka, was among 11 dogs — including three Dobermans, a Dalmation and a golden retriever — flown into the country from Moscow via courier on Sept. 8. They were quarantined after they didn’t clear customs, with federal agents claiming they didn’t have the proper paperwork for rabies vaccinations and accusing the courier of smuggling two dogs in carry-on luggage.

“Make sure no harm comes to them until I sort all this out."

The courier and the buyers of the dogs insist the papers were in order and have sued in federal court to get them released to the people claiming they are the rightful owners. After the government argued on a Sept. 18 telephone conference that the dogs should be sent back to Russia, U.S. District Judge Frederic Block put off a decision on their fate.

“Make sure no harm comes to them until I sort all this out,” Block said at the time.

Three days later, prosecutors wrote a letter to the judge saying Uti-Puti had "unfortunately passed away.”

The standoff has left the buyers, some of whom paid breeders thousands of dollars, in distress and the dogs in limbo. Hobbs said that while deciding on her purchase for an emotional support dog, the breeder in Belarus sent videos and photos of the Yorkie wearing hair ribbons that got her hooked.

The Ark at JFK

The Ark at JFK is a full-service animal rest reception center open around the clock. The high-end $65 million facility offers a pet oasis where dogs departing or arriving from international or long-distance travel can get full veterinary and grooming services. By summer, there will be a Paradise 4 Paws bone-shaped splash pool and doggy spa for pets that board there overnight. And then there is the equine facility, where horses can lounge comfortably as specially designed fans wick away their perspiration and opera plays on speakers.

Hobbs still had hopes of bringing the Yorkie home until word came from the animal quarantine facility, known as The ARK at JFK, that the dog had died. A necropsy found that the dog tested positive for the highly contagious canine parvovirus. A second Yorkie named Wonderful Baby Blue Diamond was under the care of a veterinary clinic suffering from an intestinal illness, according to court papers filed this week.

The plaintiffs in the lawsuit are now claiming they were kept in the dark about the condition of the dogs at The Ark, calling it a “disease-ridden facility.” They also say the dogs were unnecessarily revaccinated for rabies without the owners’ permission.

“It’s been really, really rough for me to deal with her death."

The rabies vaccinations mean the dogs must remain at The ARK for another 28-day quarantine period before the question of whether they can legally enter the country or not is finally settled, prosecutors said. The owners call that unfair, in part because they say they’re being threatened with having to pay $250 a day per dog for their care.

“The question of who is responsible for any of these charges rests upon whether the seizure was reasonable and constitutional,” the plaintiffs say in court papers.

Officials at The Ark have weighed in as well, complaining to the court that the case is harming its reputation as a “state-of-the art, multi-million dollar, climate-controlled facility” that offers first-rate animal care. The organization is still waiting to get paid for “providing valuable service for U.S. citizens and dogs” even though it “had no role in the smuggling of dogs or their counterfeit papers,” lawyers wrote in a court filing.

Hobbs says all the wrangling only serves as a cruel reminder of “the unnecessary death” of the Yorkie she planned to rename Pixie once settled in Dayton.

“There’s no reason she had to die,” she said.