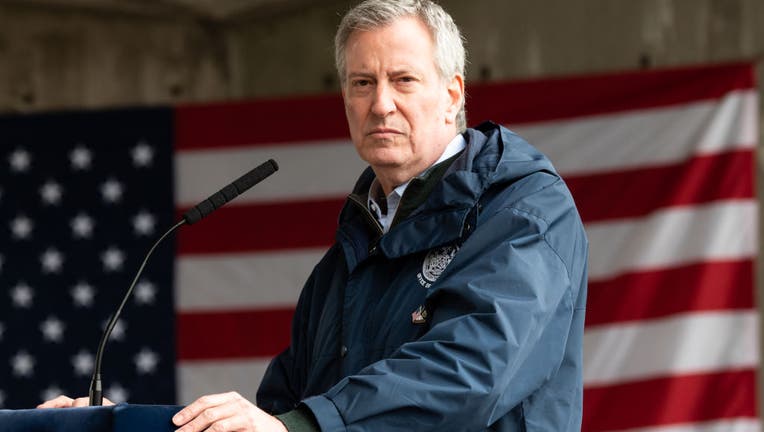 NEW YORK - While New York City may have flattened the coronavirus curve, swaths of the once vibrant and bustling Big Apple remain boarded up. Crime is running rampant. A mass exodus of both people and businesses has left buildings dark, and the uncertain future of what used to be the seeming center of the world has both the left and right pointing fingers at Democratic Mayor Bill de Blasio.

How and why did the 59-year-old mayor become so unpopular across the political spectrum?

City & State New York's First Read survey, conducted by the Honan Strategy Group in late June, showed that only 1 in 10 out of more than 400 political insiders – ranging from conservatives to liberals and all views in between – approve of de Blasio and his handling of 2020's defining crises: the global pandemic and the turmoil stirred over police brutality and systematic racism.

According to the data, the result was a significant fall from March when his approval stood at 20%.

"With all due respect, we don't care what political insiders think. This is a badge of honor," de Blasio's press secretary, Bill Neidhardt, told Fox News. "Mayor de Blasio knows who put him in power: Working-class people, families of color, the labor movement. Political insiders, the wealthy and the well-connected can keep dreaming if they think we are yearning for their approval."

But it is that staunch defense that has other New Yorkers reeling.

A public petition for his ousting has been revived in recent times – with more than 170,000 signatures supporting the notion that he cannot hold the helm of the ailing city until his term is up at the end of 2022. The frustrations run the gamut: from an increase in parking meters and property taxes to a failure to adequately fund the New York Police Department (NYPD).

Indeed, that has emerged as a flashpoint issue on both left and right and has become symbolic of the 109th mayor's schism and hesitance to take a proper stand either way.

"It is obvious why Mayor de Blasio is unpopular on the right. He is anti-business, the cops, growth, and freedom."

"It is obvious why Mayor de Blasio is unpopular on the right. He is anti-business, the cops, growth, and freedom," said Adam Weiss, CEO of the New York-based firm AMWPR. "The left does not like him because they think he hasn't gone far enough with his progressive policies. They believe he is too pro-police, and he doesn't tax people enough. The fact that the super left and moderates don't like him shows that he is left without a base."

Since the coronavirus outbreak, a bevy of mixed messages has ignited criticism from those who stand by stringent lockdowns, those who advocate for economic openings, and the many trying to feed their families and keep them safe.

Mayor de Blasio says that it is impossible to reopen the city's public school system due to the coronavirus.

From initial refusals to shutter schools, subways, and playgrounds at the beginning of the pandemic – which has since moved to the other extreme of declining to offer dates as to when indoor dining and gyms can reopen, even as numbers hold steady – has some scratching heads. Public feuding with New York Gov. Andrew Cuomo and consistent condemnation of President Trump's handling of the pandemic has also given space to those who argue de Blasio is merely deflecting blame.

De Blasio has also been condemned for both his support and lack of support for the NYPD. His mayoral campaign seven years ago and the progressive promises he made included being the only candidate to "end the stop-and-frisk era that targets minorities."

The controversial policy was significantly reduced under de Blasio, although not eliminated. Critics vowed it brought about an uptick in crime, and anti-police advocates vowed it didn't go far enough.

Yet other New Yorkers have taken issue with de Blasio's echoing of the defund the police movement and push to re-distribute funds intended for law enforcement, at a time when violent crime is surging across the economically strung city. When his daughter, Chiara, was arrested on a charge of unlawful assembly while protesting in early June following the death of George Floyd in Minneapolis – accompanied by de Blasio's condonation – some law enforcement saw it as a direct blow to their mandate to protect and serve.

"How can the NYPD protect the city of NY from rioting anarchist when the Mayor's object throwing daughter is one of them," tweeted the Sergeants Benevolent Association, a police union, which later removed the post.

De Blasio family politics have again reigned front and center in the media lair this month, with the mayor coming under fire over the revelation that his wife, Chirlane McCray, boats a $2 million staff of 14 despite the steep financial crisis and budget cuts embattling City Hall.

"There's no money for regular trash pickups or to maintain city parks, but Mayor Bill de Blasio's wife enjoys a 14-member staff — including a $70,000 videographer who captured her baking cookies during the pandemic," the New York Post wrote. "Some of the Chirlane McCray staffers, who cost city taxpayers nearly $2 million a year combined, work for the first lady's $1.25 billion mental health initiative ThriveNYC, which has come under fire for its lack of metrics."

McCray, who is contemplating a future run for Brooklyn borough president, is reported to have doubled the number of staff on her books since 2018. De Blasio -- despite implementing a hiring freeze earlier this year allowed his wife to hire a new $150,000-per-yer top adviser in April under the umbrella of an "essential worker" – has since defended the ascending staff count, insisting that the mental health work "is about the needs of the people of this city especially in a crisis."

But since he took office at the beginning of 2014, de Blasio's popularity has been something of fodder for debate.

In the initial years in office, deficiencies were often issued a pass, given that the city remained safe and flourishing following intense cleanup efforts by predecessors Rudy Giuliani and Mike Bloomberg. And yet his standing across the board still waned.

Mayor Bill de Blasio is defending himself from criticism that he was campaigning for President when Saturday's blackout struck.

A statewide poll released in August last year, conducted by Siena College, underscored that 26% of voters had a positive view of de Blasio – contrasted by 57% who did not, and 17% who were "undecided" – bringing a 31-point negative rating in a state that skews a heavy blue.

In his victorious second-term election in 2017, technically only 8.5% of New Yorkers voted for him amid dismal voter turnout numbers.

And a prominent part of de Blasio's ailing acclaim, some observers contend, comes down simply to persona. In Weiss's words, he comes across as having "no sense of optimism, and always seems depressed."

"New Yorkers are a tough crowd. Mayoral popularity frequently rises and falls on quality-of-life issues, and the city has seen an uptick in visible homelessness and a loss of parking spots as he continues to tilt urban policy toward green transportation and away from cars. His failure to link the homeless situation with housing has drawn criticism from both the left and the right," noted Lou Young, a New York political consultant and former journalist. "Truth is, though, most of DeBlasio's problems are both optic and self-inflicted."

Young pointed to the notion that the mayor insists on trekking from his official Gracie Mansion residence across town to Brooklyn to his favorite gym every morning, is habitually late to events, and that he publicly ate pizza with a fork (the horror!) – just to name a few.

Rosanna Scotto sat down with Mayor Bill de Blasio and asked him to weigh in on reports that pay-to-play is rampant at City Hall.

"Truth is, he did most of what he promised — universal pre-K, paid sick leave, minimum wage hike; typical progressive agenda items. He has fallen short in the creation of new housing and has wrestled with control of the schools," Young said. "[But] in trying to do everything, he seemed to be focusing attention on his failures allowing his successes to get lost. He made traffic safety a major priority, but 'Vision Zero' has been plagued by pedestrian and cyclist injuries and deaths."

Then there are the seemingly minor – albeit momentous -- irritations that simply grind the New York spirit. Although de Blasio was born in Brooklyn, he grew up mostly in Massachusetts and is subsequently a Red Sox fan in a city with two major baseball teams – one of which, the Yankees, has a world-renowned rivalry with their Boston-based counterpart.

Then there are the odd gaffes, like trying to copy Trump's perchance of nicknames by slapping the president with the label #ConDon – only to learn the wince-worthy way that it's actually Spanish for condom.

De Blasio's foray into the Democratic primaries last year with 2020 presidential visions was also viewed by commentators as projecting unpopularity on a national stage.

After registering low poll numbers and unable to qualify for the third run of debates, de Blasio halted his presidential campaign last September and went on to endorse Sen. Bernie Sanders months later. And while de Blasio doesn't have to worry about reelection – his term limits expire in 2022 – New Yorkers are pondering what the next two years could bring. An embittered Cuomo in June even lashed out, as protests gained momentum, that he had the authority to "remove" the city's mayor if the situation was not controlled.

This weekend, Mayor Bill de Blasio will be in Des Moines, Iowa to continue his Presidential campaign, not attending the Puerto Rican Day Parade.

Scott Sobel, a senior crisis and litigation vice president for the kglobal Agency and native New Yorker, surmised that while getting fired by the governor is possible in theory, it is highly unlikely.

"Remember NYC is part of New York state, and it probably serves the governor well to have someone to blame things on while skillfully cherry-picking credit for the successes. Cuomo can do the math," he told Fox News. "New Yorkers may not love de Blasio, but they despise Donald Trump a lot more. The enemy of my enemy, etc. New Yorker's will deal with the mayor for another two years, and so will the governor."

Yet Cuomo and others in the political and business sectors are subtly cautioning for the mayor to take the mass departure of the wealthy fleeing the beleaguered boroughs as the pandemic goes on seriously. This week, de Blasio concurred with comedian Jerry Seinfeld that "of course" the city is coming back – but it won't be without some concrete incentives.

"Most people, left or right, want one thing above all other, and that's security. People want to be safe," added Carsten Pfau, a global economics expert and founder of the Agri Terra Group. "Restaurants and bars are dying. On top of that, [there is] surging crime and riots. A politician has a very simple task to fulfill – provide security, health, and education. New York right now offers none. No viable plan to make things better, either."