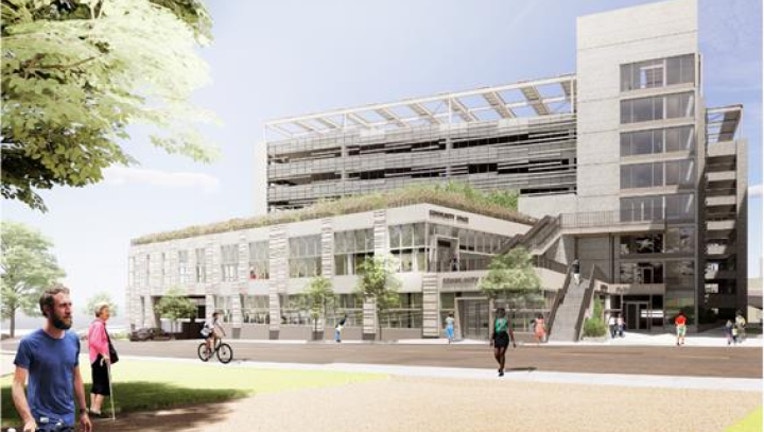 Credit: Office of the Mayor of New York City

The program is an $8.3B effort by the city to construct four new, smaller, more humane jails in Manhattan, the Bronx, Brooklyn, and Queens to replace Rikers Island.

A new parking garage and community space will be built alongside a new jail in Kew Gardens, adjacent to Queens Borough Hall and the Queens Criminal Courthouse. The new, roughly 105-foot tall structure will include a 25,000-square-foot, two-level, flexible, multi-purpose community space, plus more than 600 public parking spots.

"Today we move one huge step closer to our goal of a fairer and more equitable jail system for all New Yorkers," said de Blasio. "Closing Rikers Island will make our city stronger and more just, and I’m proud to deliver a system that better reflects this city’s values."

City officials have agreed on a plan to close the jail on Rikers Island.

The structure is being built on the west side of an existing parking lot at Union Turnpike between 126th Street and 132nd Street. The east side of the parking lot will remain open during construction.

"Closing Rikers Island is a crucial component of this Administration's commitment to a safer, fairer justice system for New York City," said Marcos Soler, Director of the Mayor's Office of Criminal Justice. "The progress on the Queens site represents the latest step on our path towards transforming justice by safely reducing the City's jail population, investing in community-driven public safety, and building a smaller and more humane system of detention facilities that will lead to better outcomes for people who come into contact with the city’s jails."

New York City has been working to close the much-criticized jail on Rikers Island since 2019, and announced last year that it, along with the Manhattan Detention Complex, nicknamed "The Tombs," would be closing.

Protest over plans to build jail in Kew Gardens

The city's Borough-Based Jails Program has not been without controversy, however, as residents in Kew Hardens held a protest in 2019 to oppose the construction of a jail facility in their neighborhood.