Good Day Wake Up host Dan Bowens got a tattoo at famed Chelsea shop Inked NYC. The tattoo artist, Koral Ladna, is helping to raise money for refugees from the war in Ukraine.

NEW YORK - The image will last a lifetime and the meaning runs deep.  My bicep was a canvas recently inside Inked NYC.

Beyond the pain of the ink tattooed on my skin, it's a personal connection to this moment in time, shared with tattoo artist Koral Ladna.

I asked her about the personal connection many people have when they put time and effort into thinking about their own ink.

"There's a lot of factors in a tattoo," said Koral. "It's an emotional connection. It's very important that it's something that flows with your anatomy. It's not just putting something that you put it once and that's it. It's a creative process - from start to finish." 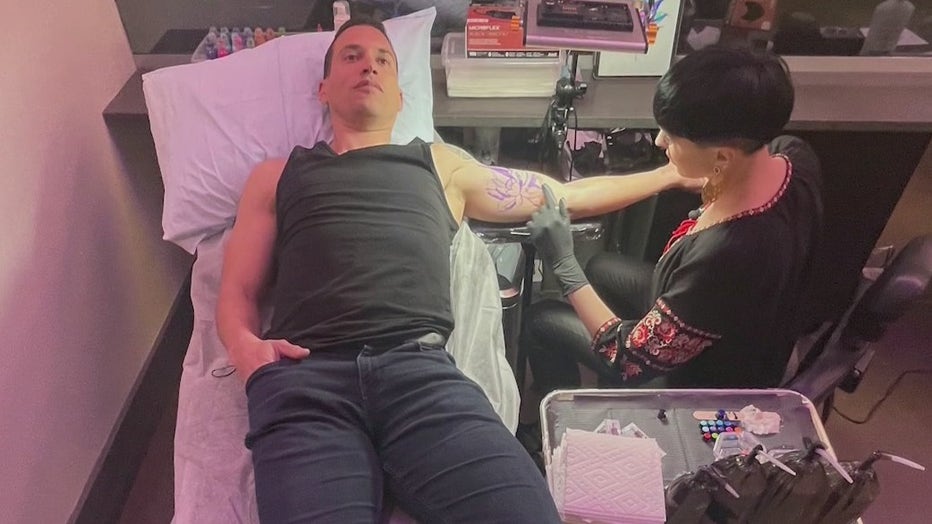 She's one of the artists inside Inked NYC, the shop on West 22nd Street in Chelsea. It's where clients range from celebrities like Post Malone and 50 Cent to those just looking for that perfect image.

She also focuses on the collaboration aspect between artist and client.

Inked NYC is an extension of InkedMag which is perhaps the best known publication in the industry.

Ukraine President Volodymyr Zelenskyy appealed to members of the U.S. Congress in a virtual address for help defeating Russian troops.

The notoriety lent weight to a recent campaign to raise money for refugees of the War in Ukraine.

It's something that holds special meaning for Koral. It's her home country where she still has family.

"Myself, like most other people in my community, have family friends and people that we care about over there. It's very difficult to be far away," she said.

Koral and the shop hosted a raffle benefiting Ukrainian refugees with tattoos as the prize. They raised $70,000 in just a few days.

RELATED: Ukraine's Zelenskyy cites Pearl Harbor, 9/11 in appeal to US Congress for help against Russia

"People are trying to help any way that they can," said said.

This spring Inked NYC is also emphasizing a floral theme and bold colors to brighten up these complicated times -- which brings us back to my arm.

A splash of spring and life renewed, appealing to me, with the birth of my daughter who is my fourth child.

In general, I'm trying to keep a positive outlook these days.

After talking with Koral, at length, she created a strikingly beautiful Lotus Flower. A symbol of purity, enlightenment, self-regeneration and rebirth.

Once described by Binghamton University this way: Its characteristics are a perfect analogy for the human condition: even when its roots are in the dirtiest waters, the Lotus produces the most beautiful flower.

I love it.  (Full disclosure: this was a complimentary tattoo from Inked NYC.)

I did give Koral a tip, but she didn't accept it.  Instead, she donated to that same organization as the raffle.   The group is called Razom- a non-profit providing emergency humanitarian support to those directly impacted by the war.

If you want to help, go to razomforukraine.org