New York Gov. Andrew Cuomo unveiled his administration's latest quirky, folky poster. This one captures some sentiments about the fight against the coronavirus pandemic. Cuomo said these posters are modeled after the poster art of the 1800s.

"Economy Falls," Cuomo said during Monday's news conference, gesturing to a waterfall atop a river of dollar signs on the poster. "Get it? Economy Falls like Niagara Falls?"

"It's kind of a nice public relations gimmick," political consultant Hank Sheinkopf said. "It gets people to focus. And by the way: It's got Andrew Cuomo written all over it."

Indeed, we find quotes from the governor attributed to the governor and images of the governor, the governor's convertible and the governor's daughter's boyfriend ("Boyfriend Cliff is there," Cuomo said, pointing to a man inexplicably hanging from a cliff) pictured at various points on a mountain representing the now-flattened curve of COVID infections in New York.

But after encountering the poster on the governor's Instagram Monday ("it's got a little Narnia-esque journey going through it," Cappetta said) and spending some time deciphering its various landmarks into Tuesday ("nasal swab, cute little button nose," the governor said during his news conference, pointing to a nasal swab entering a nostril), Cappetta started to appreciate Cuomo's artistic vision.

So I love history. I love poster art. Poster art is something they did in the early 1900s, late 1800s, when they had to communicate their whole platform on one piece of paper. Over the past few years I've done my own posters that capture that feeling. 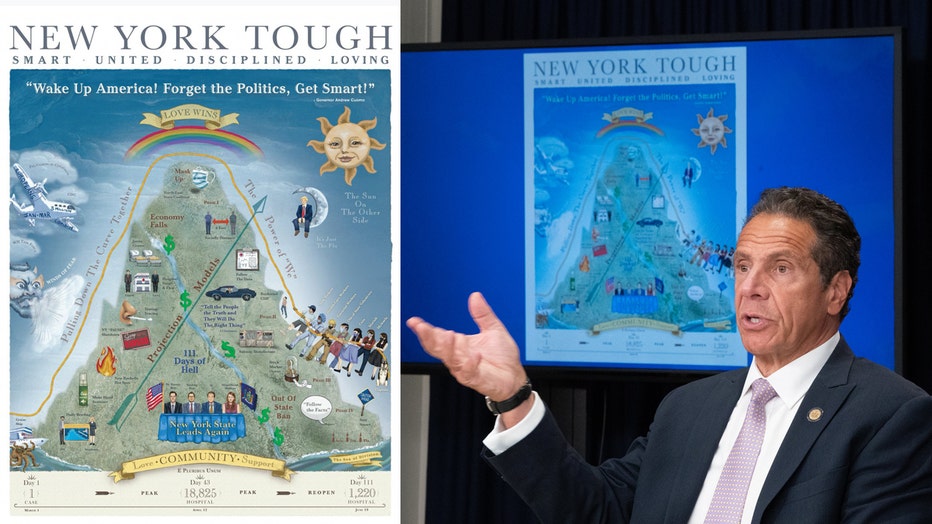 Gov. Andrew Cuomo speaks about his new poster (right); a more detailed look at the poster itself (left). (Courtesy of Governor's Press Office)

"You know what?" he said. "I like it. There's something about it that's folky. It is unexpected."

"For me, these posters just allow a different form of expression," Cuomo told Jimmy Fallon Monday.

"The Hope poster with Obama or different things like that?" Cappetta said. "[This is] not that."

And yet, Sheinkopf at least still thought this New York Tough poster might live on for many years as a collectible memento from these trying times.

"He better hope things continue well," Sheinkopf said, "because if not, it's going to be a relic that people hold onto and they're going to poke fun at."

"And I'm going to give you a poster because you were a part of it," Cuomo told reporters in attendance Monday.

For those not at the news conference, the poster is for sale on the governor's website for $11.50, at no profit to the state of New York.

TRANSCRIPT OF THE GOVERNOR'S REMARKS

So, I love history. I love poster art. Poster art is something they did in the early 1900s, late 1800s, when they had to communicate their whole platform, candidacy on one piece of paper, right? They wanted to run a campaign, they didn't have TV commercials, they didn't have mail, they didn't have any of these things. So they got their whole message on one piece of paper and it always fascinated me—I use so many words—what if somebody said, okay no words. Paint me a picture that tells the story of what you're trying to say. That's poster art. And it's helped me because it's been like a relief valve, not that I don't have joy every day dealing with you guys, but I could go and just use a different side of my brain. And this was the most famous—the William Jennings Brian with the octopus. He's fighting the octopus and the octopus is corporate trusts that are taking over the economy, right? You could almost do that again today.

So over the past few years I've done my own posters that capture that feeling. I did this one for the State of the State. Ship of State that was sailing in the Sea of Division, right? Back in January. Well, in any event, so I did a new one for what we went through with COVID and I think the general shape is familiar to you. We went up the mountain, we curved the mountain, we came down the other side and these are little telltale signs that, to me, represent what was going on. That big arrow that goes right up through it. That was the economic models, right? We needed 120,000 beds, we needed 140,000 beds, and those models shot straight up. We had to bend the curve despite those models. We needed 30,000 ventilators, that model said.

We almost get to the top of the mountain—Economy Falls—get it? Economy Falls like Niagara Falls, but then the economy drops, the economy falls. And the economy comes running down. Timeline on the bottom. From day one to day 111. It's roughly scaled and then little visuals of what was going on. Starts on day one—little octopus is the tell back to the William Jennings Brian poster. Zack got that right away. First comes on a cruise ship—the COVID virus, right? We start the daily briefings. It's Jim Malatras and Stephanie Benton. Hand sanitizer, we have the winds of fear are blowing, everybody's afraid. We have the plane bringing three million people from Europe and that's how COVID came through the clouds of the federal government, CDC, et cetera. Testing, hospital surge, Javits Center. We're pulling down the curve together, right? One hundred and eleven days of hell.

The New Rochelle hot spot, first hot spot cluster. Testing, tracing. Nasal swab, cute little button nose. I'm driving once again – one of the few benefits of this, I get to drive myself now. Subway disinfection. We've turned the corner, mask up, social distancing. The sun is on the other side of the mountain. We just had to make it to the other side of the mountain. There's the man in the moon. It's just the flu. Phase one, we're now coming down the other side. Boyfriend cliff is there. Tell the people the truth, they will do the right thing. They made the boyfriend look like Zack Fink, I'm not sure why.

I have my three daughters there. That's Captain. They have him a little paunchy – he's on a diet. He's not that bad, but he's on his way.

Stock market reopens. We come down the other side. There's the briefing table. Out of state ban. Follow the facts. That's Arizona, Texas, Florida going up. Last little sign, "caution ahead." We've climbed the mountain, we're down the mountain. Be cautious. What we're talking about today. Do compliance, watch people from other states, and we're still in the sea of division, which I talked about in January, even worse. George Floyd murder, racial tension, protests. Even worse than it was.

So, New York tough, smart, united, disciplined, loving. In case you haven't heard that before because love wins at the end of the day. Love is the rainbow. Timeline on the bottom. We forged community and community wins. You were part of it. And I'm going to give you a poster because you were a part of it.