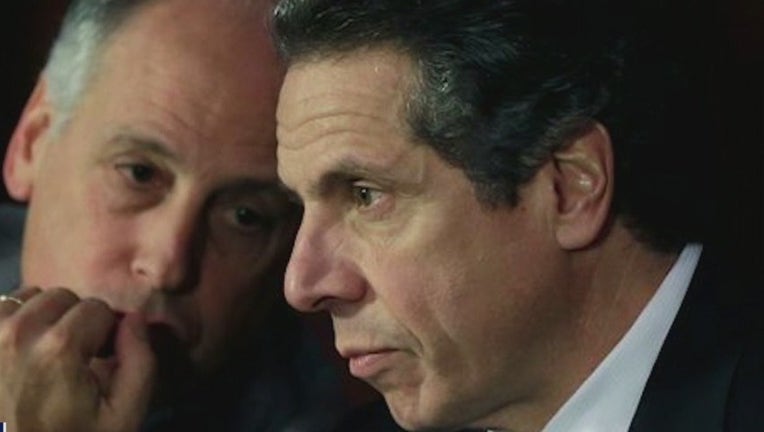 David Gilbert, 76, the Weather Underground member who is serving a life sentence for his role in the bungled 1981 Brink’s robbery north of New York City, a bloody heist involving leftist revolutionaries that left a guard and two police officers dead.

He is among the last surviving people still imprisoned in the $1.6 million robbery often seen as a last gasp of ’60s radicalism.

Through Cuomo’s action, he will be referred to the state parole board for potential release. Under his sentence, he wouldn’t have been eligible for parole until 2056. In a news release, Cuomo’s office said that while locked up, Gilbert has made significant contributions to AIDS education and prevention programs, and worked as a tutor, law library clerk, paralegal assistant, teacher’s aide and aide in various prison programs.

Gilbert’s son, San Francisco District Attorney Chesa Boudin, said his "heart is bursting, and it also aches for the families of the three victims."

"Andrew Cuomo’s final act as governor is a disgusting betrayal to the people of Rockland County," he said in a statement. "This year will mark the 40th anniversary of the Brink’s Robbery and rather than stand with the brave men and women in law enforcement, Andrew Cuomo has once again stabbed them in the back."

Four men whose sentences were commuted Monday by Cuomo were in prison for murder convictions.

In a prerecorded farewell address, Andrew Cuomo suggested that he is resigning from office because of a so-called political firecracker.

Last week, Cuomo granted clemency to 10 people, including Jon-Adrian Velazquez, whose unsuccessful campaign for exoneration in the 1998 killing of a retired New York City police officer was championed by actor Martin Sheen.

Maybe none of those cases had the fame of the Brink's heist.

Brink’s guard Peter Paige and Sgt. Edward O’Grady and Officer Waverly Brown of the Nyack Police Department were killed in the holdup and ensuing shootout at a nearby roadblock.

Gilbert, an unarmed getaway driver, was charged with robbery and murder since people were killed during the crime. He and two co-defendants cast themselves as freedom fighters and deemed their trial illegitimate. At one court session, Gilbert and co-defendant Judith Clark raised their fists and shouted "Free the land!"

Clark was granted parole in 2019, three years after Cuomo commuted her sentence, noting her "exceptional strides in self development."

Gilbert’s fight for freedom gained attention as Boudin, who was just 14 months old when he went to prison, campaigned last year for San Francisco District Attorney.

Boudin ran a progressive campaign in which he said visiting his parents Kathy Boudin and Gilbert in prison showed him the criminal justice system was broken.

"On the eve of my first child’s birth, my father, David Gilbert, has been granted clemency," Boudin said in an email to The Associated Press. "Although he never used a gun or intended for anyone to get hurt, my father’s crime caused unspeakable harm and devastated the lives of many separate families. I will continue to keep those families in my heart."

Steve Zeidman, the lawyer and law professor who spearheaded Gilbert’s clemency campaign, said he was overjoyed for Gilbert and his family.

The director of the Release Aging People in Prison Campaign, Jose Saldana, celebrated the clemencies but said there are many others who deserve to be released.

"Governor Kathy Hocuhl will inherit and indefensibly racist and brutal prison system and we are hopeful that she will lead our state toward a more humane system of justice," Saldana said in a statement.

Here is the full list of commutations and the pardon released by Cuomo:

David Gilbert, 76, was convicted of three counts of second-degree Murder and four counts of first-degree Robbery in 1983. He has served 40 years of a 75-years-to-life sentence, related to an incident in which he was the driver, not the murderer. While incarcerated, Mr. Gilbert has made significant contributions to AIDS education and prevention programs; he has also worked as a student tutor, law library clerk, paralegal assistant, a teacher's aide, and an aide for various additional facility programs. At this time, Mr. Gilbert is the only individual still incarcerated, with no possibility of parole in his lifetime. He will be referred to the Parole Board for potential release.

Greg Mingo, 68, was convicted of four counts of second-degree Murder, first-degree Robbery, first-degree Burglary, and second-degree Criminal Possession of a Weapon. He has served 39-and-a-half years of a 50 years-to-life sentence. While incarcerated, Mr. Mingo earned his GED and a paralegal certification, enabling him to assist over a thousand other incarcerated people with their legal cases, and designed an eight-week legal research course that he taught for years at Elmira and Great Meadow. Mr. Mingo has also become a dedicated and respected peer counselor, founding programs focused on fatherhood, family relationships, and domestic violence and abuse, and has facilitated thousands of hours of counseling programs. Upon release, Mr. Mingo plans to live with family and work as a full-time counselor helping individuals struggling with addiction, anger, and domestic violence.

Robert Ehrenberg, 62, was convicted of two counts of second-degree Murder, and one count of first-degree Robbery and first-degree Burglary. He has served 28-and-a-half years of a 50 year-to-life sentence. While incarcerated, Mr. Ehrenberg has earned as Associate's degree from SUNY Sullivan, and a Bachelor of Science degree from St. Thomas Aquinas College, graduating as valedictorian of his class for both degrees. Mr. Ehrenberg has worked as a tutor through the Hudson Link College Program, and in this role designed and taught a 16-week pre-college Basic Algebra course. Mr. Ehrenberg has also been a leader within charitable groups that raise funds for causes like academic scholarships, childhood cancer research, and animal rescue and sanctuary efforts. Upon release, Mr. Ehrenberg plans to continue his education and volunteer work.

Ulysses Boyd, 66, was convicted of one count of second-degree Murder, and two counts of second-degree Criminal Possession of a Weapon, for an incident in which he was not the gunman. He has served 35 years of a 50 years-to-life sentence. While incarcerated, Mr. Boyd has served as a clerk for the facility branch of the NAACP, and as a DOCCS transitional services coordinator for over a decade. Upon release, Mr. Boyd will be reunited with his wife.

Lawrence Penn, 51, pled guilty to first-degree Falsifying Business Records in 2015, and was incarcerated for two years. A West Point graduate and a veteran, Mr. Penn continues to be active in his community, and a full pardon will allow him to fully re-engage in a meaningful way with society.