STONINGTON, Maine - A fisherman got a Halloween surprise when he pulled out a “ghost” lobster. 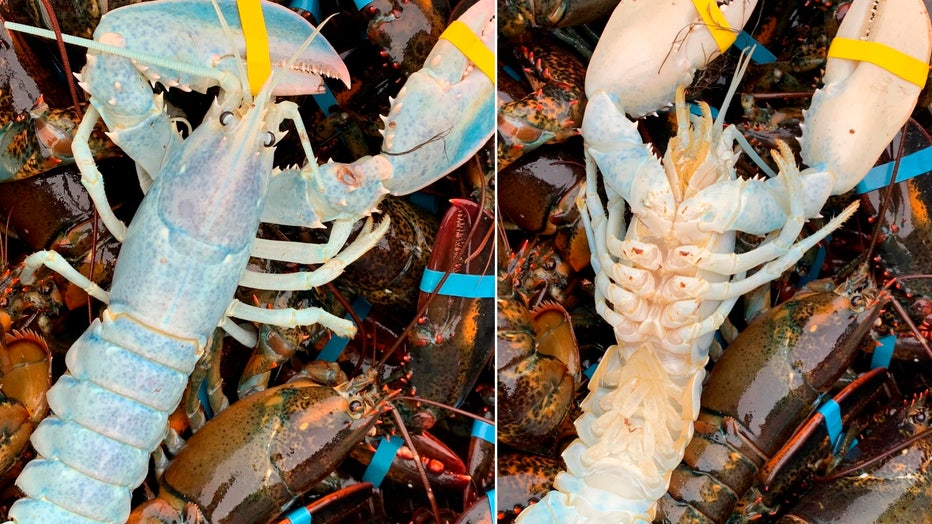 Bennett Gray trapped it along the Maine coastline on Oct. 25.

The lobsterman posted pictures on Facebook of a rare albino lobster that he snagged. The odds of catching one have been reported to be one in 100 million.

“Caught this beauty in the very first trap of the day,” Gray wrote in his caption.

Gray also wrote he will “notch” its tail and release the lobster back into the sea.

“A v-notch is a mark on the tail flipper of a female lobster that was put there by a commercial lobsterman as a means to identify and protect a known breeder in the population from harvest,” he further wrote on Facebook. “Lobstermen cannot keep a v-notch female lobster. so this will protect her for years to come, until she eventually sheds her shell enough times for the notch to grow out.”

According to the Maine Lobstermen’s Community Alliance, the color of lobsters can vary.

“About one out of every two million lobsters may come up in a trap colored blue. Your chances of finding a yellow lobster are even less...There are even lobsters that are two different colors, one on each half of their bodies. These bi-colored lobsters are typically hermaphrodites bearing a male sex organ on one side of their body and a female sex organ on the other side. Lobstermen have also hauled up calico lobsters, orange lobsters, and even bright red lobsters!” the website reads.

According to the Alliance, lobster shells contain astaxanthin, a pigment to determine their color. Astaxanthin is naturally red but can change to blue or yellow when combined with proteins. A white lobster lacks any pigment in its shell.

While the find may be novel to much of the country, Maine has seen its share of rare lobsters, and they’ve even been discovered at restaurant chains. In July, a rare blue lobster found itself a in new home at the Akron Zoo instead of being served on a hot plate with a side of cheddar biscuits after being discovered by a Red Lobster employee.

RELATED: Extremely rare blue lobster turns up at a restaurant on Cape Cod

The zoo released a statement that said a Red Lobster employee at the Cuyohoga Falls location found a blue lobster in a delivery to the restaurant. Blue lobsters occur once every 2 million lobsters, according to the zoo.

"The coloration comes from a genetic defect that causes the lobster to produce an excessive amount of a particular protein that gives the lobster that unique coloration," according to the University of Maine's Lobster Institute.