Extended interview: Expert explains how COVID-19 vaccines work and side effects after shots

Dr. Williams Moss, an epidemiologist and executive director of the International Vaccine Access Center at Johns Hopkins, explains how mRNA vaccines by Pfizer and Moderna work and why side effects are more likely after the 2nd dose.

As the vaccination campaign against COVID-19 continues and more people receive their second dose, many have reported that it caused more intense side effects than after the first. But vaccine experts say this news is both normal and expected.

"It’s a sign that your immune system is working," said Dr. Williams Moss, an epidemiologist and executive director of the International Vaccine Access Center at Johns Hopkins.

To date, more than 35 million vaccines have been administered in the U.S., and nearly 7 million have received their second and final dose, according to the U.S. Centers for Disease Control and Prevention.

Side effects from the vaccines being used in the U.S., developed by Moderna and Pfizer-BioNtech, are normal signs your body is building protection. The CDC says flu-like symptoms are to be expected and can include fever, chills, headache, muscle aches and tiredness. Some may have pain and swelling in the arm at the site of the injection. All side effects should go away within a few days.

In vaccine trials for Moderna and Pfizer, side effects were more frequent after the second dose. Moss said some may have had minimal or no symptoms from the first dose, but will feel side effects after the second because their immune system is already primed — resulting in a more intense inflammatory reaction the second go-around. 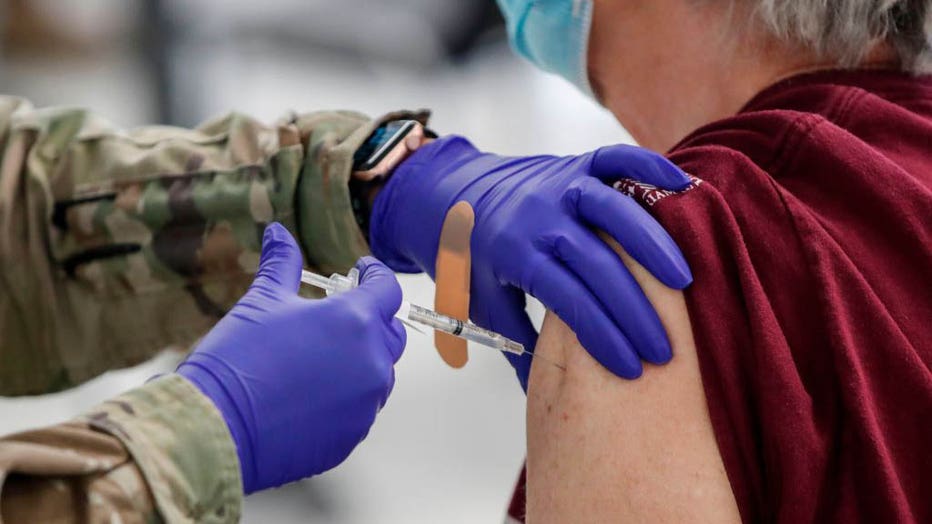 FILE - A woman receives a Pfizer COVID-19 vaccine at a vaccination center established at the Triton College in River Grove, Illinois, on Feb. 3, 2021. (Photo by KAMIL KRZACZYNSKI/AFP via Getty Images)

Users of V-safe, the CDC’s tool to report vaccine side effects, have reported more side effects within a week of getting their second shot, compared to the first.

Mark Sussman, who recently got his second dose of the Moderna vaccine, said he felt sick for about a day and a half.

"Chills, shortness of breath, muscle ache, general just soreness," Sussman described to FOX 5 DC, days after receiving his second shot. Sussman added that it wasn’t a "full-blown flu," but side effects did stick around for about 36 hours.

But not everyone feels side effects. Sussman’s mother also recently got a second dose of the Pfizer vaccine and felt fine.

How does the COVID-19 vaccine work and why do we feel side effects?

There are spike proteins on the surface of SARS-CoV-2, the virus that causes COVID-19, which are critical for the virus to bind to the body’s cells and replicate. All of the developed COVID-19 vaccines work to induce an immune response against the spike protein, primarily through antibodies.

The Moderna and Pfizer vaccines being administered in the U.S. are mRNA vaccines. This is a new technology but not unknown, as scientists have been working on the mRNA technology for more than a decade.

"Through that mechanism, our own cells producing the spike protein, then what happens is our immune system will see that protein and will recognize it as foreign," triggering an immune response, he said.

This immune response is known broadly as inflammation, which can result in side effects such as redness, swelling and tenderness at the injection site. It can also mean a broader systemic response in the body, such as fever, headache, muscle ache, joint pain or fatigue.

"A number of things happen with regard to inflammation, but it’s really a sign that our immune system is recognizing that there’s a foreign protein in our body and is preparing to fight it and get rid of it," Moss said.

Why might some feel more side effects after the second dose?

As part of the body’s immune response, it builds memory cells known as T-cells and B-cells. If a virus or foreign substance enters our body again, such as the second dose of the mRNA vaccine, it’s a reminder to the immune system.

"Basically, that second dose is saying, ‘Hey, I know a month ago you saw this spike protein. I’m going to remind you once more what it looks like so that you’re really ready to attack it,’" Moss explained.

The Moderna and Pfizer vaccines are two doses, spaced apart by 28 and 21 days, respectively.

The first dose of the vaccine primes the immune system, building an army of cells. As a result, Moss said the second dose then generates a bigger immune response — hence the possibility of stronger side effects.

"We’ve got many more cells available to attack it," Moss explained. "But that’s why the inflammation can be more severe with the second dose because our immune system is kind of already primed, so you get an even more intense inflammatory response."

Does the vaccine still protect you if you don’t feel side effects?

While side effects are generally a sign that the body’s immune system is working, those who feel fine after getting the vaccine are certainly protected, too.

"People who don’t have moderate or severe side effects from the vaccine can still have a very protective immune response. They just didn’t have, for various reasons, that intense inflammatory response," Moss said, citing a combination of genetics and prior history of exposure.

Why is the second COVID-19 dose so important?

The two-shot dose from Pfizer and Moderna is what has been shown in clinical trials to be 94% or 95% effective in preventing symptoms of COVID-19. While there is some protection afforded by a single dose, the protection may be significantly shorter, though it remains unclear.

In January, the U.S. Food and Drug Administration said extending the length of time between doses or skipping the second altogether would be "premature and not rooted solidly in the available evidence." The agency reiterated the importance of continuing the two-dose regimen at the studied 21-day and 28-day intervals.

Dr. Anthony Fauci, the government’s top infectious disease expert, also clarified this week that the U.S. will "go by the science" from its clinical trials and continue administering second doses of the Pfizer-BioNTech and Moderna vaccines within the recommended timeframe.

Fauci was responding to a debated strategy used by the U.K. of delaying the second shot so it can protect more people quickly with a first dose. Pfizer, one of two vaccines approved in the country, has not endorsed the decision to space out the time between doses.

Fauci says US should stick with current 21-day and 28-day vaccine intervals for Pfizer, Moderna

Dr. Anthony Fauci said the U.S. should stick with the data showing optimal results by boosting the Pfizer vaccine at 21 days and Moderna at 28 days, despite studies from AstraZeneca about prolonging the interval.

More than 458,000 Americans have died from the virus, a death toll higher than in all of World War II. Nearly 27 million people in the U.S. have contracted it, some even suffering from more serious, long-term complications.