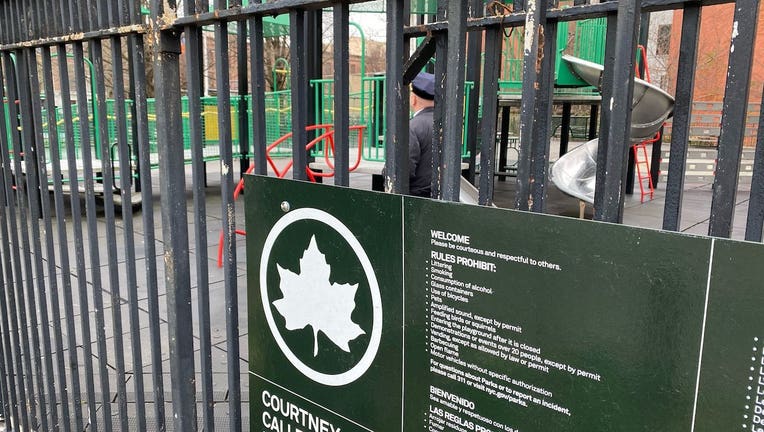 A police officer keeps watch at a shuttered playground in Harlem, March 31, 2020. (NYPD)

The department reported on Tuesday that 1,048 uniformed members and 145 civilian employees have tested positive for the coronavirus. More than 5,600 officers (about 15.6% of its uniformed workforce) were out sick on Tuesday—more cops than serve in the entire Houston Police Department.

The NYPD, with more than 36,000 sworn members, is the largest police department, by far, in the United States.

In the past week, five members of the department, including a detective assigned to a Harlem precinct, a Queens school safety agent, two administrative aides, and a custodian have died of COVID-19-related causes.

The department announced on Tuesday that it will be getting an influx of personal protective equipment—including masks, gloves, and sanitizer—to help keep its workforce safer during the pandemic.

As part of the response to the coronavirus outbreak, the NYPD has been patrolling the city to make sure that people are keeping their distance from each other, that group events aren't taking place, and that nonessential businesses are closed.

Police officers visited more than 13,000 businesses and public spaces in the 24-hour period from Monday morning through Tuesday morning to check compliance, the NYPD said.

Mayor Bill de Blasio announced Tuesday that police and Parks Department would shut down 10 playgrounds because of repeated violations of the emergency order.