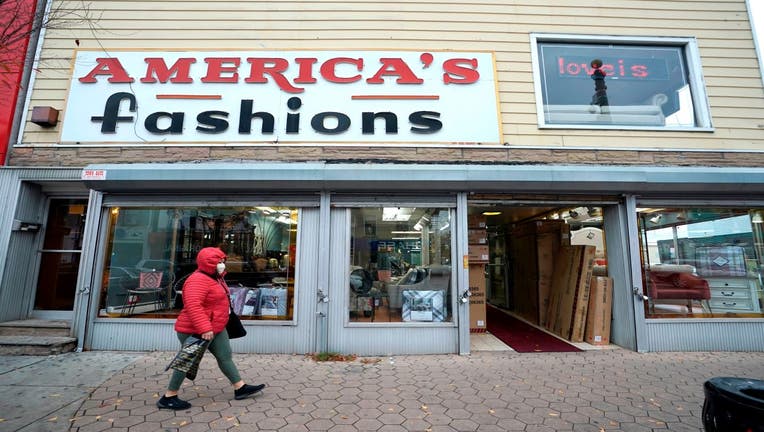 A person walks past a business in downtown Newark, New Jersey on November 12, 2020. (Photo by TIMOTHY A. CLARY/AFP via Getty Images)

NEWARK, N.J. (AP) - It's not a stretch to say that Shirley Staciuk has experienced the coronavirus pandemic from multiple vantage points.

In April, her older brother died from the virus after spending more than two weeks in and out of hospitals. As parent liaison at a school in Newark's Ironbound neighborhood, where a spiking infection rate has prompted the city to impose a curfew, she has overseen the distribution of free Thanksgiving turkeys to families affected by the pandemic.

She also has witnessed people flocking back to the neighborhood's numerous restaurants and bars in recent months, raising a new level of concern.

“I am extremely self-conscious about it, obviously it hits really close,” Staciuk said Tuesday as she took a break from handing out turkeys. “When you do see people that act like there’s nothing going on, or don’t wear a face covering, it really gets to me. I feel like going up to them and saying, ‘There IS something going on, this is not normal.’"

The resurgence of the virus in New Jersey has been amplified in Newark, its largest city, and particularly in the Ironbound, the heart of the city's Spanish and Portuguese communities and the epicenter of Newark’s nightlife.

The test positivity rate has soared as high as 50% there recently, and stood at about 40% according to the most recent data furnished by the city. The overall rate in Newark is about 20%, about double the statewide rate.

Those numbers in the Ironbound and in two other zip codes in the city prompted Mayor Ras Baraka to impose a 9 p.m. curfew two weeks ago in those areas. Last week Baraka went further, saying he would “lock the city down” for 10 days beginning Wednesday and ordering nonessential businesses throughout the city to close at 8 p.m. and residents to shelter in place.

Last weekend, checkpoints were set up at entrances to the Ironbound, with only residents or people with essential business allowed in. The police department and mayor's office didn't answer questions Wednesday about whether those checkpoints would resume during the next 10 days.

Baraka, who was born and raised in Newark and worked as a high school principal there for many years, defended the measures and said people who have accused him of pandering or fear-mongering "are living in a fantasy world, they don’t have a grip on the reality of what’s happening in these neighborhoods.”

“We have so much power to protect the people in our community, or be selfish and watch them perish,” he said during a briefing this week. "History will record either one we decide to do.”

Baraka said during a video briefing this week that Newark, which has a population of roughly 280,000, has reported nearly 600 new cases and four deaths since last Friday.

Vicky Hernandez, who leads the Ironbound Community Corporation, a grassroots group focused on job training, family support and tenants' rights, said concern over the virus's spread is high, leading many to embrace the new measures.

“There’s real concern about the extensive spread of the virus in the community. Even though it will be challenging, to be sure, people's concerns about health and well-being outweighs that," she said. "I give the mayor credit for making a really difficult call at a really critical time.”