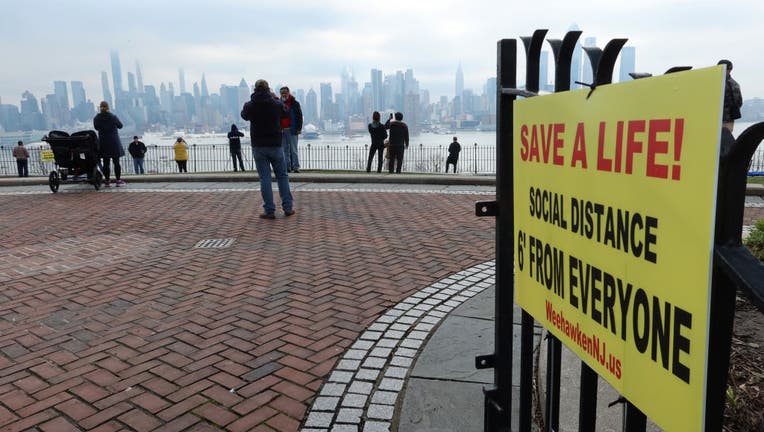 TRENTON, N.J. - Positive coronavirus cases have reached about a quarter of all of New Jersey's nursing homes, accounting for more than a fifth of the 355 total fatalities from the virus, officials said Tuesday.

Gov. Phil Murphy and Health Commissioner Judy Persichilli said during a daily briefing that the number of cases in the state climbed to more than 22,000, up about 3,000 in the last day. The death toll climbed by 91 people from Tuesday to Wednesday.

The virus' expansion to 93 of the state's 375 nursing homes is concerning, Murphy and Persichilli have said, but added that it's expected.

They have said employees at the facilities must wear masks. Visitors have been restricted from going to nursing homes since early last month, except in cases involving residents on hospice.

The development came the same day that Persichilli said that a surge of cases is hitting northern New Jersey.

“Community spread is here in New Jersey and it's here to stay for a while,” she said.

New Jersey also slashed regulations for some health care providers to make it easier for them to work confronting the coronavirus, Murphy said.

An executive order cuts red tape for health care workers with out-of-state licenses or credentials from other countries so that they can work in New Jersey hospitals, Murphy said.

“We're going to be in hunkered-down mode for a while,” he added.

A look at other developments.

“The ongoing COVID-19 pandemic has caused hardships, financial strain, and disruptions for many New Jerseyans and New Jersey businesses," the leaders said.

Senate President Steve Sweeney and Assembly Speaker Craig Coughlin will move any necessary legislation and supplemental appropriations to get the state through the rest of the fiscal year, the leaders said. All three men are Democrats.

The change in the income tax filing deadline mirrors what the federal government announced last month.

The details of the budget are unclear. Murphy had proposed a $40.9 billion spending plan that called for increased spending for schools, public pensions and New Jersey Transit, but the economic impact the virus will have on state finances looks dire given a sharp rise in unemployment claims.

The state will need as much cash as possible from the federal government, Murphy said.

The climbing death toll is straining morgues in New Jersey, the governor said, and more space will be needed soon. He said he's begun discussions about getting more morgue space with federal officials, including the Defense Department.

The state is working to get refrigerator trucks to transport deceased people, according to Persichilli and the state police superintendent.

It's unclear when the new storage will be needed, Murphy said, but it's coming soon.

The state got 350 new ventilators from the federal governments, bringing the statewide total of new equipment to 650, according to the governor.