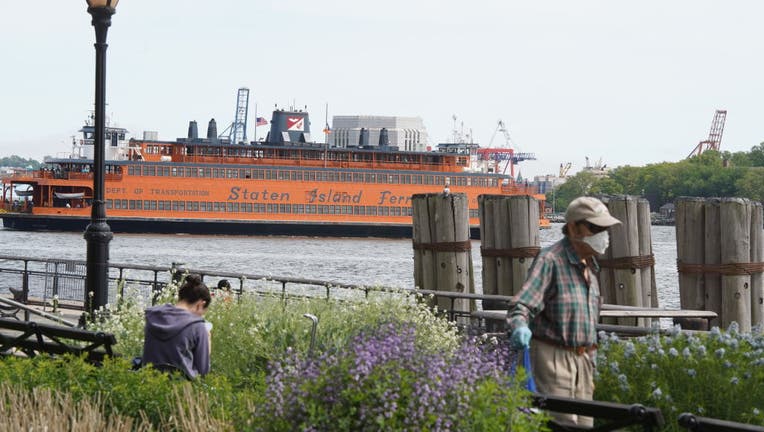 NEW YORK, NEW YORK - MAY 27: The Staten Island ferry passes by during the coronavirus pandemic on May 27, 2020 in New York City. (Photo by Rob Kim/Getty Images)

NEW YORK - New York City officials have been focusing nearly exclusively on Staten Island for the city's COVID-19 checkpoints, with authorities stopping more than 1,350 vehicles to register travelers returning from more than 30 states who are required to quarantine for 14 days.

The mayor said during a news conference Thursday that most of the checkpoints have been on Staten Island because that is where most out-of-state traffic into the city comes through.

The city's only checkpoints for the first three days of the program were on Staten Island, with officials saying they were testing the program there before expanding it to other locations. Plans at the time included six checkpoint areas — the George Washington Bridge, Goethals Bridge, Bayonne Bridge, OuterBridge Crossing, Lincoln Tunnel, and Holland Tunnel.

The New York City Sheriff's Office, however, has only gone to the Lincoln and Holland tunnels on two occasions, while keeping checkpoints on Staten Island every day since they first opened on Aug. 5. De Blasio said new checkpoints are planned for the Bronx and other locations in the coming weeks.

The New York City Sheriff's Office will be leading the city's efforts to stop a certain number of people entering the city to remind them that they must quarantine if they came from one of 35 states where COVID cases are rising. Reported by Antwan Lewis

"I understand the thought behind it, it’s impossible to enforce and my only thought about why they might target (Staten Island) is we have better pizza,” she said.