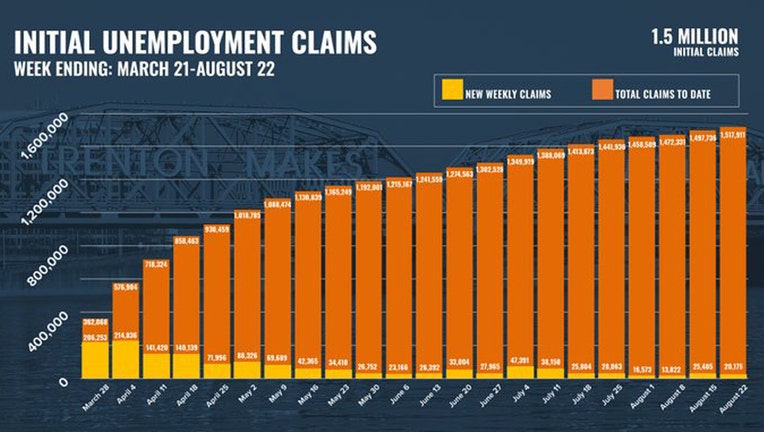 Initial unemployment claims in New Jersey by week and cumulative. (Courtesy of New Jersey Department of Labor and Workforce Development)

TRENTON, N.J. (AP) - The number of people applying for jobless benefits in New Jersey last week fell to just over 20,000, a 21% drop compared with the prior week, the state Labor Department said Thursday.

The state's jobless claims have soared to more than 1.5 million, primarily because of the response to the COVID-19 pandemic, officials have said.

Last week also marked a sharp drop in how much the state paid out in benefits, falling to $316 million. The drop reflects the July 25 expiration of a federal $600 weekly benefit for all unemployed residents. Typically, the Labor Department said, the state paid out about $500 million weekly.

New Jersey has applied for a federal $300 weekly benefit for those who lost work because of the virus, Democratic Gov. Phil Murphy said. That benefit was announced recently by Republican President Donald Trump in the absence of a deal with Congress to renew jobless benefits.

The state is not opting to chip in an additional $100 a week, as envisioned under the president's proposal. Murphy cited the cost to the state as a factor.

New Jersey has had more than 190,000 positive cases of the virus and over 14,000 deaths. The state has been reopening, with gyms cleared to reopen at 25% on Tuesday.