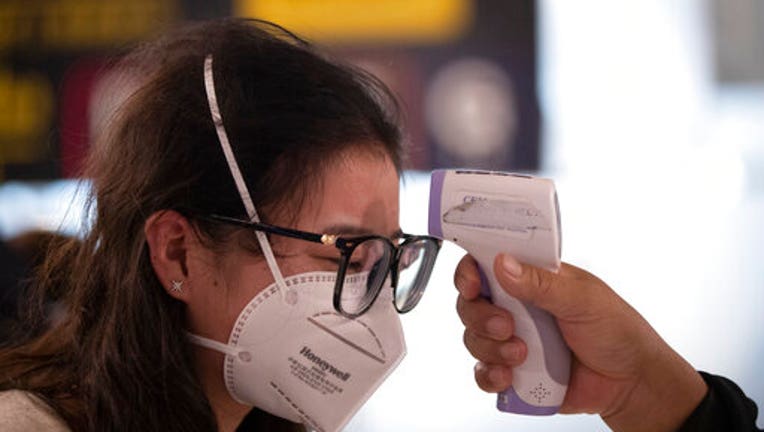 Health officials check tourists' temperatures in hopes of preventing the spread of the Covid-19 virus as they arrive at the Suvarnabhumi Airport in Bangkok, Thailand, Wednesday, March 4, 2020. (AP Photo/Sakchai Lalit)

The slowdown in coronavirus cases out of China offers a sliver of hope that the global outbreak can be controlled, but whether that can happen anytime soon without drastic measures remains to be seen, public health authorities say.

With China accounting for the overwhelming majority of the world's 94,000 infections and 3,200 deaths since the virus first surfaced there in late December, it’s hard to see the country as a success story. But some experts believe the easing of the crisis — there are now more new cases being reported outside China than inside it — suggests containment is possible.

World Health Organization outbreak expert Maria Van Kerkhove, who recently traveled to China as part of a team from the U.N. health agency, said the international experts noted a drop in cases there since the end of January.

“We scrutinized this data and we believe this decline is real,” she said, adding that the extraordinary measures undertaken in China — including the unprecedented lockdown of more than 60 million people — had a significant role in changing the direction of the outbreak.

“We believe that a reduction of cases in other countries, including Italy, Korea, Iran, everywhere, that this is possible,” she said.

But the path to containment outside China is sure to be rocky, and no one is predicting when the outbreak might end.

There is some consensus among public health experts: The virus is likely to be around for quite some time, perhaps many months, and will continue to spread to many places, but it can probably be controlled with standard public health measures, though not as quickly as in China.

Emergency medicine physician Dr. Leana Wen, a public health professor at George Washington University, said widespread quarantines, lockdowns and travel bans of the sort ordered by China’s authoritarian regime are unlikely to be used in other countries. How those less-aggressive approaches will play out is unclear, she said.

As China's numbers have stabilized, "we are seeing this rapid escalation around the world. At this point I believe things will get much worse before they get better," Wen said Tuesday, "and we have no idea what the trajectory will look like now that there is person-to-person transmission around the world.”

While the crisis appears to be easing in China, alarming clusters of thousands of cases each have turned up in Italy, Iran and South Korea and Japan. The U.S. has more than 120 cases in at least 15 states, with nine deaths, all in Washington state.

Dr. Albert Ko, a professor and department chairman at the Yale School of Public Health, said there were signs that the spread in China might have started slowing down even before authorities there implemented a travel ban and closed off Wuhan, the epicenter, in late January. That’s an argument for more conventional public health measures, including widespread testing, limiting of social gatherings and the closing of some schools.

“Travel bans and lockdowns of cities, those are drastic measures that have really large costs with respect to social disruption, stigmatization and so forth,” Ko said.

Encouraging the public to take action may be more effective, he said.

Dale Fisher of the University of Singapore said the four large outbreaks outside China suggest what the next few weeks of the COVID-19 epidemic might look like.

“I think the virus is behaving very much as we would expect it to,” he said. “There are now four parts of the world with heavy transmission rates, and there will probably be one or two more next week. One or two of these might come under control, but there will likely be activity elsewhere.”

Mistakes and slowness in the U.S. effort to start large-scale testing for the virus have limited officials’ ability for the moment to get a handle on the scope of its spread, said Dr. Carlos Del Rio, a specialist in infectious diseases and chairman of the global health department at Emory University in Atlanta.

Many state labs have yet to develop their own tests because of early federal restrictions, since removed. It is still taking four to five days to get results back from tests that must be sent on to more distant labs, Del Rio said. And federal guidelines, though revised recently, continue to limit who gets tested, he said.

The fact that nine patients have died in Washington state while just 27 or so cases have been confirmed there suggests that many people with the disease are being missed, he said. Aggressive testing is likely to reveal many more cases, Del Rio said.