President Joe Biden and first lady Jill Biden announced on Saturday that one of their German Shepherds, Champ, had died.

Champ had been with the family for 13 years and passed away peacefully at home, a statement from the White House said.

"Even as Champ’s strength waned in his last months, when we came into a room, he would immediately pull himself up, his tail always wagging, and nuzzle us for an ear scratch or a belly rub," the statement read.

"Wherever we were, he wanted to be, and everything was instantly better when he was next to us."

Champ, who was purchased from a Pennsylvania breeder, has been with the Bidens since 2008. The pooch was welcomed into the family on Christmas Day and named Champ by Biden's granddaughters.

The Bidens have a second German Shepherd, Major, who has been involved in several biting incidents since Biden took over in the White House. 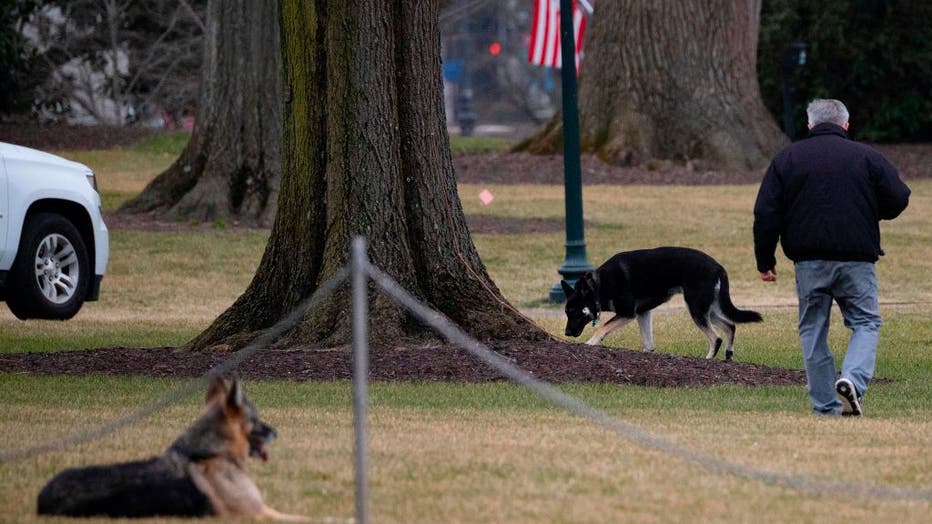 First dogs Champ and Major Biden are seen on the South Lawn of the White House in Washington, DC, on January 25, 2021. (Photo by Jim Watson/AFP via Getty Images)

Major joined the family in 2018, 10 years after Champ. Major made history as the first rescue dog to reside in the White House.

Champ and Major were frequently featured on Biden’s social media accounts during the 2020 presidential election cycle. During Biden’s campaign, he signaled the desire to bring dogs back to the White House.

Commander in chief's best friend: A look back at presidential pets

For the first time in a very long time, the White House is presidential pet free.

The last time pooches set their paws in 1600 Pennsylvania Ave. was when former President Barack Obama’s two Portuguese water dogs, Bo and Sunny, resided there. Obama famously promised his daughters a dog during the presidential election in 2008.

Presidents owning dogs is an American political tradition that dates back to the first U.S. President George Washington, who was also a dog lover and breeder. Washington even coined his own unique breed, according to History.com.

The Bidens said in his younger days, Champ was happiest chasing golf balls on the front lawn of the Naval Observatory or racing to catch our grandchildren as they ran around our backyard in Delaware.

"In our most joyful moments and in our most grief-stricken days, he was there with us, sensitive to our every unspoken feeling and emotion," their statement continued. "We love our sweet, good boy and will miss him always."