The radio host held a photo opportunity outside the building on Wednesday and offered to organize a colony of feral cats on the block.

Sliwa offered to become New York's "Rat Czar" to fight the rat problem outside of Adams building and across the city.

Adams announced last month that the city was looking to hire a person to head up rat mitigation efforts.

The job posting called it a dream job if you have "the drive, determination and killer instinct needed to fight the real enemy."

The mayor was asked about Sliwa's offer at a sanitation news conference on Wednesday.

"I will take him up on his offer. You know, if he says he will be my rat czar for free, I’m going to call him and I would like for him to come on board to do it," Adams said.

But he issued a warning.

"This is not a Tom and Jerry playful commercial here.  This is real stuff," Adams said.

The major also jabbed Sliwa saying, "he can be part of our internship program because I know he’s probably looking for a job since he lost a job that he was trying to get."

The pair had a pair of nasty debates during the campaign for mayor.

But at the end of their second debate, Adams complimented Sliwa for adopting and rescuing cats, 16 of which he and his wife keep in their small Manhattan apartment.

"I commend him for what he's doing around cats," Adams said at the time. 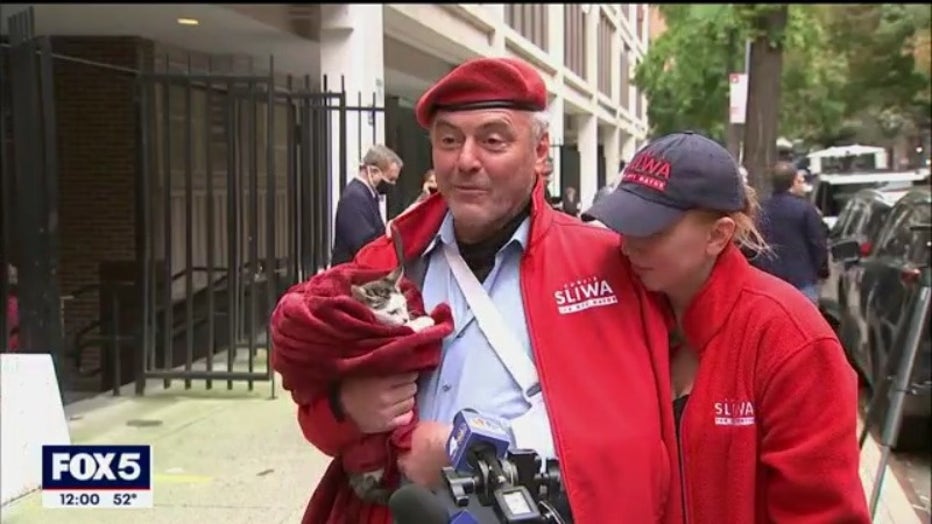 Curtis Sliwa speaks to reporters outside a Manhattan voting site on Election Day 2021.

Sliwa was famously turned away from voting in 2021 when he showed up to his Upper West Side voting location with his cat named Gizmo.

Sliwa was told by Board of Election officials that he could not vote with the cat.  He ended up leaving the cat outside.