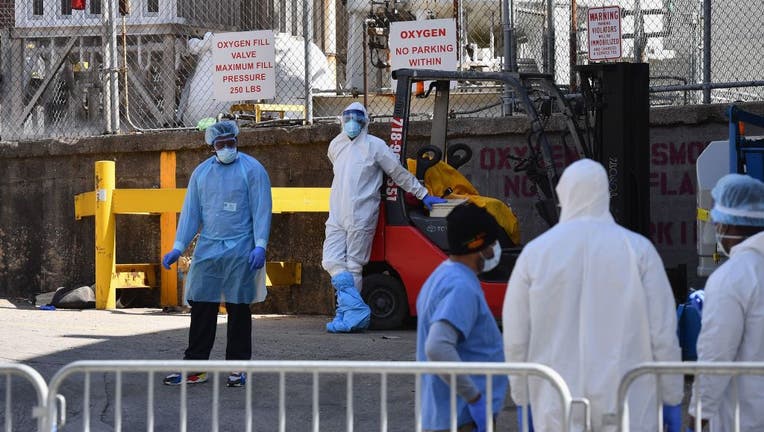 Workers in medical gear stand by a refrigerated truck used as a makeshift morgue outside of the Brooklyn Hospital on April 1, 2020 in New York City. (Photo by Angela Weiss / AFP) (Photo by ANGELA WEISS/AFP via Getty Images)

NEW YORK (AP) — The work is exhausting and dangerous, the situation bleak. But an army of health care workers heeded New York’s call for help reinforcing hospitals overwhelmed by the coronavirus pandemic.

So far, at least 82,000 people have volunteered for the state’s reserve force of medical workers — a group that includes recent retirees returning to work, health care professionals who can take a break from their regular jobs and people between gigs, according to health officials.

Few have made it into the field yet as hospitals and state regulators vet enlistees and decide how to deploy them. But Gov. Andrew Cuomo said Tuesday that’s about to change. By Thursday, hospitals expect to hire about 1,500 volunteers to rescue a medical workforce that needs relief, particularly in New York City.

Health care workers who have hit the ground already, many brought in by staffing agencies, discovered a hospital system in danger of being overwhelmed.

“I have never seen so many human beings in an ER at one time in my entire life,” said Liz Schaffer, a nurse from St. Paul, Minnesota, who had her first shift Tuesday at Mount Sinai Hospital in Manhattan. “Shoulder to shoulder. It is a sight I never thought I would see. Patients are dying every day. Every single day.”

Similar recruiting efforts are underway in other states preparing for waves of patients, including California, Washington, Pennsylvania, Illinois, Louisiana, Massachusetts, Oregon, Virginia, New Jersey, North Dakota and Washington D.C. And recruitment is happening at the federal level too, where the Army and the Department of Veterans Affairs have reached out.

The death toll from the virus climbed to nearly 2,000 Wednesday across New York state, with most of the fatalities coming in New York City in just the past week.

Several of the dead have been health care workers, including Kious Kelly, an assistant nurse manager in the emergency room at Mount Sinai West Hospital, who died March 24 after becoming infected with the virus.

Many other medical workers have become seriously ill. Protective masks, gowns and gloves remain rationed at some hospitals due to anticipated shortages.

Despite those risks, many have volunteered to join the fight.

"Whatever it is that they need, I’m willing to do,” said Jerry Kops, a licensed nurse on Long Island who was on tour as a musician in the Blue Man Group before its North American tour was interrupted by the coronavirus shutdown a few weeks ago.

“I keep thinking about my old co-workers and friends that are still in nursing. And to me, it’s like if they have to be there, I should be there too,” he said. “If it means being at a testing site, cool. If it means being relief staff for RNs that are overworked right now in hospitals, cool."

Hospital volunteers in New York will be paid. But that is not always the case in other parts of the country that are seeking medical volunteers. In Washington state, for instance, volunteer retirees who staff free clinics are not routinely paid for their work. But those who volunteer at hospitals will be paid.

Adding to the corps of state recruits are more workers being brought in by staffing agencies.

Nurses are being offered up to $100 per hour plus food and lodging to fill over 5,000 openings in hospital intensive care units and emergency rooms, said Michael Fazio, whose company, Prime Staffing, has recruited over 250 workers to New York hospitals in recent weeks.

“It shocks me more and more the calls I’m getting. West Coast nurses are calling me, wanting to help,” Fazio said. “They're leaving their families, wanting to help. They don’t have the fear of COVID-19. Their driving force is saying: ‘I’m coming to help fight this, help New York City.’”

One of those nurses, Katherine Ramos, of Cape Coral, Florida, described her work at New York Presbyterian Hospital as exhausting.

She has been staying in an apartment with her husband and two children — carefully removing her shoes and clothing outside on a deck after each shift to reduce the likelihood of bringing the virus home. But she plans on moving soon to a hotel so if she catches the virus, she won’t infect her family.

“I want to be able to protect my family more,” she said.

New York officials say the state will need tens of thousands of additional medical workers to deploy quickly ahead of an expected surge in patients in the next three weeks.

Temporary hospitals are hastily being constructed in convention centers, athletic complexes, college campuses and other locations, but workers will be needed to make them functional.

In Pennsylvania, Dr. John Gallagher volunteered to work at hospitals near his home at the Ohio border a few months after retiring at age 65. He said the danger of contracting the coronavirus himself and spreading it to loved ones left him “terrified.”

“But,” he added, “it’s one of those things. If it’s needed, than we’ve got to play our part. We can’t leave people hanging out there.”

Laura Benson, 60, a semi-retired nurse in Westchester County north of New York City, said she's also ready for front-line hospital work, and was itching to get in action sooner.

“I found it a little frustrating that I wasn’t hearing back,” she said.

Westchester County summoned her last week to screen people at a childcare center for healthcare workers in nearby White Plains, but she's ready for more.

“There’s no reason I couldn’t put in a full shift somewhere. And it may come to that. I would absolutely be willing to do that. But this is the need that they have right now,” she said.