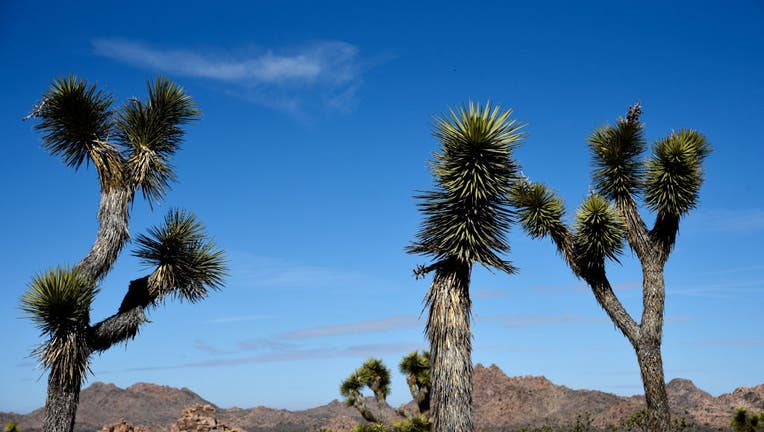 LOS ANGELES - California officials are weighing whether to list the iconic western Joshua tree as a threatened species, a designation that would make it harder to remove the trees for housing, solar or other development projects.

The desert plant is known for its unique appearance, with spiky leaves on the end of its branches, is found in the national park that bears its name about 130 miles east of Los Angeles and through a stretch of desert up to Death Valley National Park. There are two types of trees, the eastern and western, but only the western is up for consideration.

The California Fish & Game Commission took hours of public comment on Wednesday and scheduled a vote for Thursday. If the tree is listed as a threatened species, killing one would require special approval from the state.

The state has never listed a species as threatened based primarily on threats from climate change, said Brendan Cummings, conservation director for the Center for Biological Diversity.

The center petitioned in 2019 to have the western Joshua tree listed as threatened, saying hotter temperatures and more intense periods of drought fueled by climate change will make it harder for the species to survive through the end of the century. It also argued wildfires and development threats harm the trees’ ability to live and reproduce.

The state’s ongoing drought, which scientists say is part of the worst megadrought in 1,200 years, is likely harming the trees’ ability to survive, Cummings said.

But the California Department of Fish & Wildlife has recommended against listing the species as threatened. The department acknowledged that areas suitable for the western Joshua trees growth are likely to decline due to climate change by 2100. But it said in an April report that the tree remained "abundant and widespread," which lowers the risk of extinction.

"The question is not, ‘Will climate change be bad for Joshua tree?’ The question is, ‘How bad will it be, and how quickly?’ And the truth is we don’t know yet," said Jeb McKay Bjerke, who presented the Department of Fish & Wildlife’s recommendation to the commission.

It’s unknown how many Joshua trees exist in the state, but it could be anywhere from 4.8 million to 9.8 million, he said. It was a "close call" for the department not to recommend listing the species as threatened, he said, and three of five outside peer reviewers who were asked to look at the recommendation by the department disagreed with the conclusion.

About 40% of the Joshua trees in the state are on private land. Many of the comments focused on the development of housing and solar projects in the region. Several local and state politicians and union workers said listing the species as threatened would make it harder to move forward with necessary projects, including those that aim to fight climate change by boosting renewable energy.

California has set a requirement that 100% of its electricity be produced from non-carbon sources by 2045.

"We believe these types of projects are the best tools at combating climate change for protecting the western Joshua tree’s future," said David Doublet, director of land use planning for San Bernardino County, which has a high concentration of the trees and many solar energy projects.

San Bernardino County, which includes Joshua Tree National Park, recently increased the penalties for illegally removing Joshua trees — a $20,000 fine and six months in jail on the third offense. County Supervisor Dawn Rowe urged the board not to list the species as threatened, saying local and county governments were best poised to set restrictions and respond to illegal removal of the tree.

"We are your partner in conservation and preservation of the species," she said.

But numerous other speakers argued the state has no time to waste in listing the species as threatened as the state faces warmer temperatures and more extreme droughts and fires, all of which can hurt the trees. Kelly Herbinson, executive director of the Mojave Desert Land Trust, said Joshua trees are a "keystone" species of the desert, with other species reliant on its survival.

"Climate change is a threat we haven’t had to deal with yet and I get that we’re struggling to figure out the best path forward, but it’s happening and it’s happening now," she told the commission.

In 2019, the federal government declined to list the tree as a protected species.