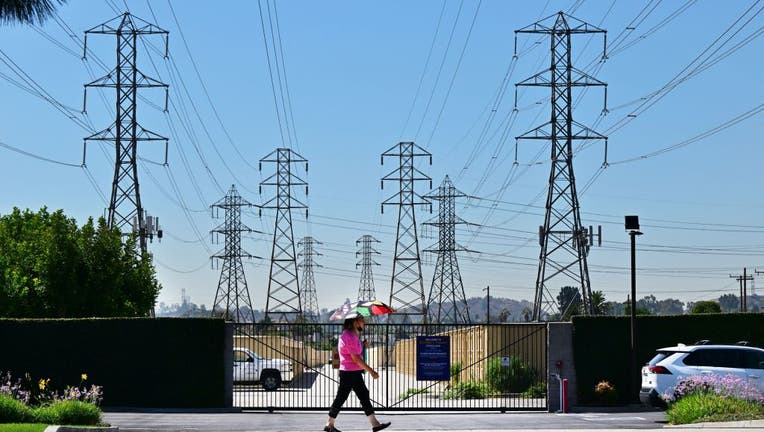 A pedestrian uses an umbrella to shield themself from the hot sun while walking past power lines in Rosemead, California, on August 31, 2022. (Photo by FREDERIC J. BROWN/AFP via Getty Images)

Days after the state announced a plan to ban the sale of gas-powered cars, California residents are being urged not to recharge their electric vehicles during certain hours due to stress on the power grid during a wave of extreme heat.

A so-called Flex Alert was extended statewide from 4-9 p.m. Sept. 1, California ISO, the state grid regulator, announced.  Residents are being urged to cut their electricty use.

During a flex alert, consumers are asked to avoid using major appliances, recharging electric vehicles, and other uses that can stress the power grid. Another way they suggest to conserve energy is to set thermostats to 78 degrees or warmer.

Energy officials warn that if people don't volunarily conserve power, they may have to implement rotating power outages to take strain off of the system.

"With excessive heat in the forecast across much of the state and Western U.S., the grid operator is expecting high electricity demand, primarily from air conditioning use, and is calling for voluntary conservation steps to help balance supply and demand," Cal ISO said.

They suggest charging any electric vehicles earlier in the day.

More Flex Alerts could be issued in the coming days due to the excessive heat.

The National Weather Service issued an excessive heat warning from Saturday morning to Tuesday night for many parts of the Bay Area, including San Jose, the North Bay valleys and Santa Cruz mountains.

The weather has raised concerns among fire departments that fires could spread quickly in the coming days.

Demand for power often increases when temperatures are high as more people turn on air-conditioning.