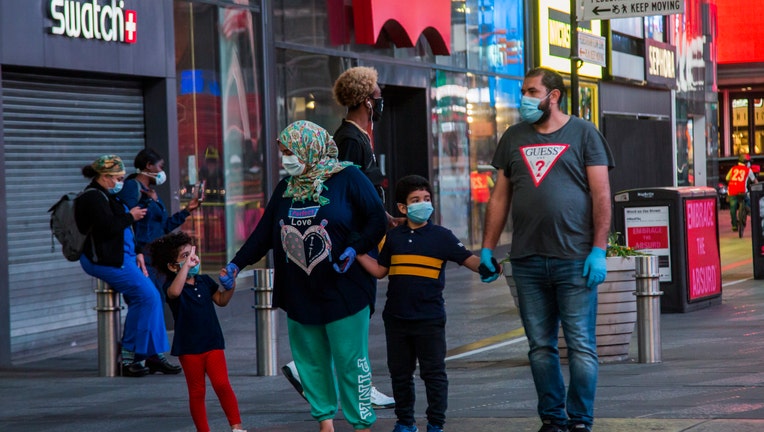 NEW YORK, NY - MAY 27: A man and woman with two children wearing face masks and latex gloves walk through Times Square on May 27, 2020 in New York City. (Photo by Pablo Monsalve/VIEWpress via Getty Images)

The promised executive order from Cuomo comes as restrictions on shops are beginning to loosen around the state, though not yet in New York City.

Cuomo said his new order will reduce conflicts between shop owners and customers who refuse to cover their faces.

The immediate effect of the order is unclear. Many stores already require patrons to wear masks.

Face coverings are already required in New York when people are out in public and near others.

Other coronavirus-related developments in New York:

“No, businesses are not supposed to make up their own rules and jump the gun,” de Blasio said at his daily briefing on the virus.

New York City is the only jurisdiction in the state that has not met Gov. Andrew Cuomo's guidelines for the first phase of New York's four-part reopening process, including having enough contact tracers to monitor people exposed to the virus. De Blasio said he expects the city to enter Phase 1, including construction, manufacturing and retail with curbside pickup, during the first two weeks of June.

Some merchants, including the owner of a Staten Island tanning salon either, have said they planned on reopening this week. De Blasio said businesses that reopen before they are supposed to will be be told to close, and if they ignore orders to shut their doors, fines will be issued.

“I’m not into free agents," de Blasio said. “I’m not into people deciding that they get to make the rules and they can do something everyone else can’t do.”