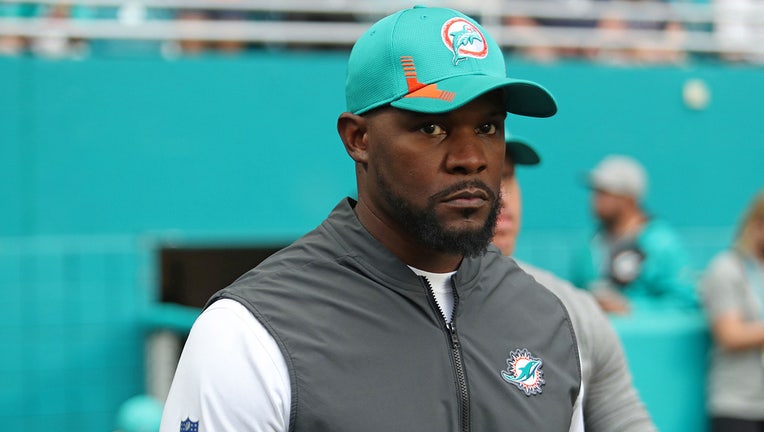 NEW YORK - Fired Miami Dolphins head coach Brian Flores is suing the NFL for racial discrimination, saying he was only interviewed for a head coaching job at the New York Giants because he is Black but was never going to be hired.

The lawsuit filed in Manhattan federal court sought class-action status and unspecified damages from the league, the Dolphins, the Denver Broncos, and the New York Giants, along with unidentified individuals.

In a statement, the law firm that is representing him stated: "On the first day of Black History Month, it is our great privilege to represent Brian Flores in his class action complaint against the NFL. This case seeks to level the playing field in the hope that future owners and coaches will be representative of the athletes who are playing this great game. We fully expect coaches and players of all races to support Brian as he embarks on his journey to create positive change."

The lawsuit claims that Flores was interviewed after the team had already decided to hire Brian Draboll, a white coach from the Buffalo Bills.

It claims that Flores was interviewed "for no reason other than for the giants to demonstrate falsely to the League Commissioner Roger Goodell and the public at large that it was in compliance with the Rooney Rule."

What is the Rooney Rule?

"God has gifted me with a special talent to coach the game of football, but the need for change is bigger than my personal goals," Flores said in a release put out by the law firm representing him in the case. "In making the decision to file the class action complaint today, I understand that I may be risking coaching the game that I love and that has done so much for my family and me. My sincere hope is that by standing up against systemic racism in the NFL, others will join me to ensure that positive change is made for generations to come."

In a statement, the NFL said the claims "are without merit."

"The NFL and our clubs are deeply committed to ensuring equitable employment practices and continue to make progress in providing equitable opportunities throughout our organizations," the NFL said. "Diversity is core to everything we do, and there are few issues on which our clubs and our internal leadership team spend more time."

In a statement, the Giants said: "We are pleased and confident with the process that resulted in the hiring of Brian Daboll. We interviewed an impressive and diverse group of candidates. The fact of the matter is, Brian Flores was in the conversation to be our head coach until the eleventh hour. Ultimately, we hired the individual we felt was most qualified to be our next head coach."

Flores was fired last month by Miami after leading the Dolphins to a 24-25 record over three years. They went 9-8 in their second straight winning season, but failed to make the playoffs during his tenure.