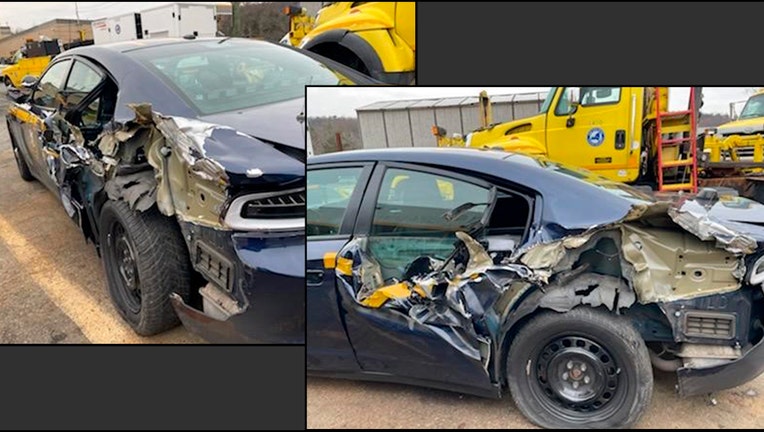 NEW YORK - A state trooper who was on duty along the interstate in Westchester County is lucky to be alive after a truck crashed into his patrol car early Tuesday morning.

Trooper Carlos Desilva was monitoring traffic from inside his troop car, which was parked in the right shoulder of the southbound Interstate-87 between exits 7 and 7A in Greenburgh, New York State Police said.

Just before 6 a.m., a 2017 Freightliner box truck drifted off the roadway and slammed into the driver's side of Desilva's marked Dodge Charger, crushing and ripping apart part of the vehicle body, police said.

First responders brought Desilva, a 15-year veteran assigned to the Tarrytown barracks, to Westchester Medical Center to be treated, authorities said. He has been released.

The driver of the truck and his passenger were not hurt.

"State Police would like to remind drivers to slow down and move over when emergency and construction vehicles are working on the highway," police said in a statement.

Authorities shared dramatic photos of the damage to the car on social media to amplify that message.

"Why should you move over? This is why. Our Trooper was inside this car when a box truck drifted off the road, onto the shoulder and hit his patrol car. Luckily, he will be okay," @nyspolice tweeted. "As soon as you see lights, vests or reflectors, check traffic around you, SLOW DOWN and MOVE OVER."

State law requires motorists to move over, if safe to do so, when passing emergency vehicles on either the side of the road.

"As soon as you see lights, vests or reflectors, check traffic around you, slow down and move over if safe to do so," New York Thruway Authority states online. "Drivers must use due care when approaching an emergency vehicle or hazard vehicle including police vehicles, fire trucks, ambulances, construction and maintenance vehicles and tow trucks."