NEW YORK - The shelves are stocked, the coffee percolating at Deli-licious delicatessen.

The only thing missing are the customers — the office workers who would come by for breakfast or lunch, the neighborhood residents stopping in for a quick purchase of a drink or a snack.

But in the days of coronavirus and sheltering in place, “it’s been a ghost town,” said Alex Batista, 28, who with his brother owns the bodega in the Glendale neighborhood of Queens.

These days, “you don’t get that kind of crowd,” he said. “Mostly we're just staying open, trying to help out the community.”

They have had one consistent source of business, sadly, as the virus has ravaged the city, killing more people than were lost in the Sept. 11, 2001, terror attacks: “Funeral homes guys, they usually come in too a lot. They're busy, too, unfortunately,” he said. 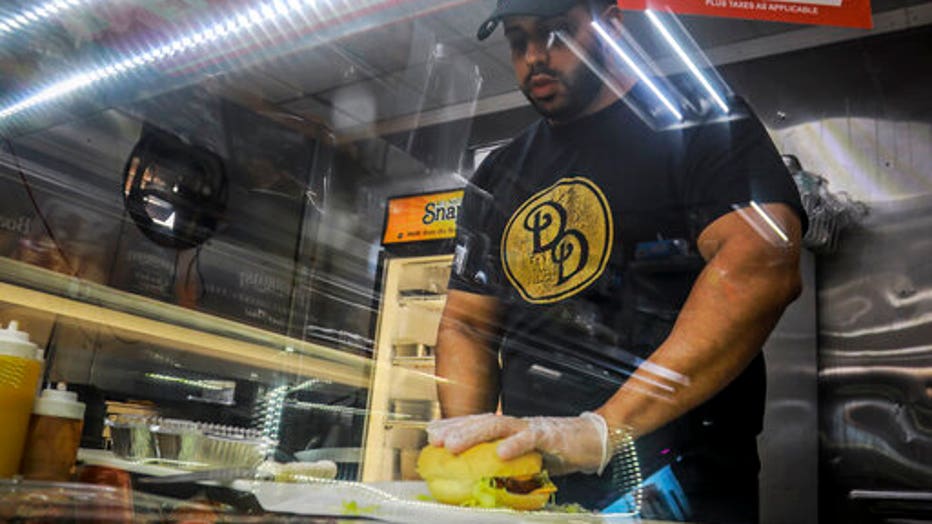 Alex Batista, co-owner of Deli-licious delicatessen in the Queens borough of New York, April 6, 2020, makes a sandwich at the store. (AP Photo/Bebeto Matthews)

They’ve shortened the hours at the store, from 7 a.m. to 6 p.m., and cut staff hours. When the occasional customer comes in, they maintain distance, bumping elbows across the sandwich counter instead of exchanging handshakes.

The cat, a mainstay of many a New York City bodega, strolls around the store, no one around to bother it.

It’s been hard for Batista, who with his brother grew up watching their father run a bodega after coming to New York City from the Dominican Republic as children and being raised in East New York.

Now, “I go home, watching the news. You get a headache from the news, you see the same thing over and over.”

He said the first week, sales dropped precipitously, around 60 percent. The week after, it picked up somewhat with deliveries, but not enough to make it up.

It can’t keep going on like this, he said.

“Three or four months of this, and that’s it, we have to shut down,” he said.

For now, he’s waiting, “just trying to get on with it, see what’s going to come next,” he said.

“Hopefully this is the worst it could get before it gets better.”