The Blue Origin flight NS-19 launched just before 9:45 a.m. ET from West Texas on New Shepard. TV personality and Retired NFL player Michael Strahan, along with five others, were on board for the launch to space. (Credit: NASA/Blue Origin)

VAN HORN, Texas - Blue Origin's third human rocket launch lifted into space Saturday, with former NFL player and TV personality Michael Strahan, along with five others, onboard for the ride of a lifetime.

Onboard was also Laura Shepard Churchley, the eldest daughter of the first American in space, NASA astronaut Alan Shepard, and four paying customers.

The capsule landed in the Texas desert just before 10: 15 a.m. ET after its short, planned 10-minute flight to space.

It was expected to be five minutes and 50 miles shorter than Alan Shepard’s Mercury flight from Cape Canaveral on May 5, 1961. Shepard Churchley took along a tiny piece of his Freedom 7 capsule as well as mementos from his Apollo 14 moonshot and golf balls in honor of her dad, who smacked some on the lunar surface.

Bezos, who saw the six off from the launch and landing complex near Van Horn, named his company’s New Shepard rocket after him. 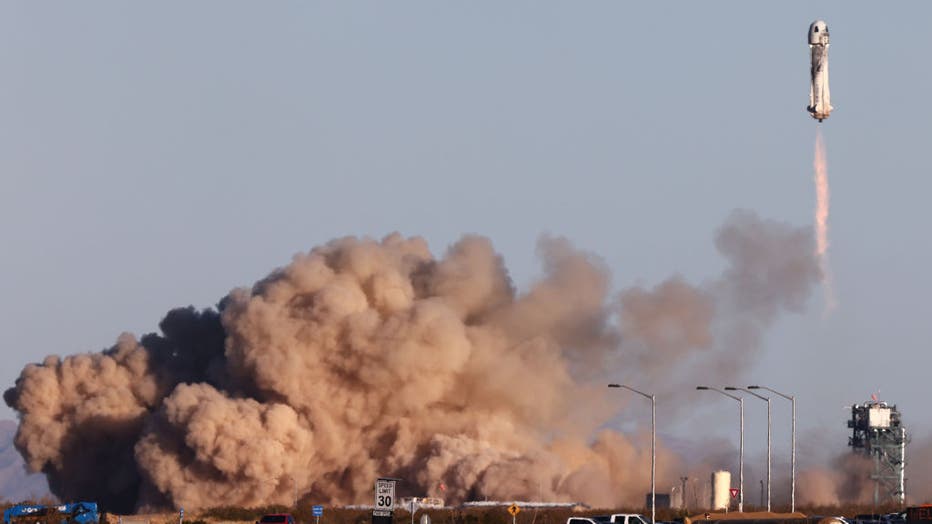 Their automated capsule soared to an altitude Saturday morning of about 66 miles, providing a few minutes of weightlessness before parachuting into the desert. The booster also came back to land successfully.

"It was unreal," Strahan said after emerging from the capsule.

He said he wants to go again — but Bezos joked he'd have to buy his own ticket next time.

Bezos had "Light this candle" painted on the launch tower’s bridge, borrowing from Alan Shepard's famous gripe from inside Freedom 7 as the delays mounted: "Why don’t you fix your little problem and light this candle?"

Shepard Churchley, who volunteered for Blue Origin’s third passenger flight, said she practiced her late father's phrase every time they went into the capsule. She heads the board of trustees for the Astronaut Scholarship Foundation.

"I thought about Daddy coming down and thought, gosh he didn’t even get to enjoy any of what I’m getting to enjoy," Shepard Churchley said following touchdown. "He was working. He had to do it himself. I went up for the ride!"

Bezos, who founded Amazon six years before Blue Origin, was on the debut launch in July. The second, in October, included actor William Shatner  — Captain James Kirk of TV’s original "Star Trek." The late Leonard Nimoy’s daughter sent up a necklace with a "Vulcan Salute" charm on this flight, in honor of the show's original Mr. Spock.

Blue Origin dedicated Saturday’s launch to Glen de Vries, who launched into space with Shatner in October, but died one month later in a plane crash.

According to Steve Lanius, NS-19 lead flight director, this is New Shepard’s 19th mission to space, and it’s the first time with six people on the flight.

"The mission operations team has confirmed in our flight radius review earlier this week that the vehicle has met all mission requirements and is ready to fly," Lanius said in a status update Friday. "Astronauts have completed their training and are ready for launch."

The launch was previously scheduled to blast off Thursday for the 10-minute flight. However, on Wednesday, the event was bumped to Saturday because of high winds.

"We’ve launched additional radiosonde weather balloons to gather more data on the weather, and everything right now — upper-level winds and surface weather — looks great for launch tomorrow," Lanius continued. "We’re going to continue to keep an eye on it as things can always change with the weather."

Lanius added, "Safety is our number one priority, and this vehicle will not launch until I’m satisfied that it’s safe to do so."

Strahan, a former NFL star, who played 15 seasons with the New York Giants, helped the team win Super Bowl XLII over the New England Patriots in his final season in 2007.

Since retiring from the NFL, Strahan has become a notable media personality, appearing as a football analyst on FOX NFL Sunday and later serving as co-host of ABC's "Good Morning America", as well as "Live! with Kelly and Michael" from 2012 to 2016.

According to People Magazine, Strahan planned to bring a few heirlooms and a lucky charm with him on the journey. While the 50-year-old has to heed a 3-lb. weight limit for his personal belongings, he told the outlet exclusively he will take along the 12 shell casings from the 12-gun salute performed at his father’s funeral, his Super Bowl XLII Ring, his Pro Football Hall of Fame Ring of Excellence and two watches. He'll also bring up a pearl necklace from his girlfriend Kayla Quick's late grandmother, his FOX and ABC employee ID cards and a lucky $2 bill.

On Friday, the Federal Aviation Administration (FAA) said it will no longer give out commercial astronaut wings starting next year because too many people are launching into space. Strahan will still make the cut since the FAA isn't clipping its commercial astronaut wings until Jan. 1. NASA astronauts also have nothing to worry about going forward, they'll still get their pins.