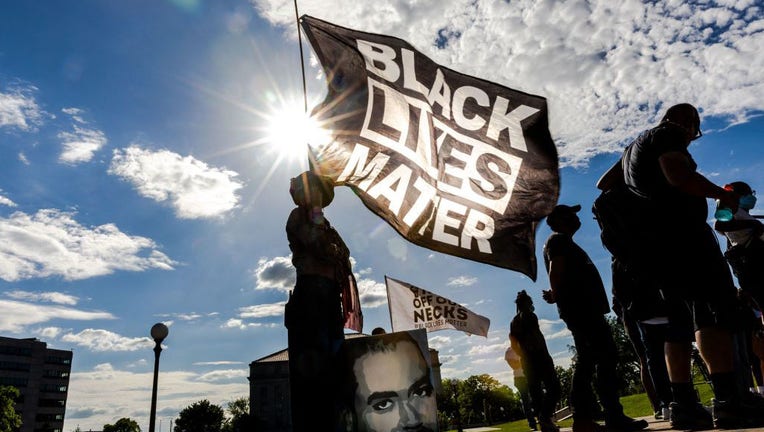 FILE IMAGE - A woman holds a Black Lives Matter flag during an event in remembrance of George Floyd and to call for justice for those who lost loved ones to the police violence outside the Minnesota State Capitol on May 24, 2021, in Saint Paul, Minne

NEW YORK - The foundation started by organizers of the Black Lives Matter movement is still worth tens of millions of dollars, after spending more than $37 million on grants, real estate, consultants, and other expenses, according to tax documents filed with the IRS.

In a new, 63-page Form 990 shared exclusively with The Associated Press, the Black Lives Matter Global Network Foundation Inc. reports that it invested $32 million in stocks from the $90 million it received as donations amid racial justice protests in 2020. That investment is expected to become an endowment to ensure the foundation’s work continues in the future, organizers say.

The tax filing shows that nearly $6 million was spent on a Los Angeles-area compound intended for use as a campus for a Black artists fellowship.

This is the BLM foundation’s first public accounting of its finances since incorporating in 2017. As a fledgling nonprofit, it had been under the fiscal sponsorship of a well-established charity, and wasn’t required to publicly disclose its financials until it became an independent, 501(c)(3) nonprofit in December 2020.

The tax filing suggests the organization is still finding its footing: It currently has no executive director or in-house staff. "It comes across as an early startup nonprofit, without substantial governance structure in place, that got a huge windfall," said Brian Mittendorf, a professor of accounting at Ohio State University who focuses on nonprofit organizations.

"People are going to be quick to assume that mismatch reflects intent," he added. "Whether there’s anything improper here, that is another question. But whether they set themselves up for being criticized, I think that certainly is the case because they didn’t plug a bunch of those gaps."

Several big brands and names have pledged money in support of the black community.

The BLM movement emerged in 2013, after the acquittal of the neighborhood watch volunteer who killed 17-year-old Trayvon Martin in Florida. But it was the 2014 death of Michael Brown at the hands of police in Ferguson, Missouri, that made the slogan "Black lives matter" a rallying cry for progressives and a favorite target of derision for conservatives.

When foundation leaders revealed the windfall of donations in the aftermath of protests in 2020 over George Floyd’s murder at the hands of Minneapolis police, local chapter organizers and families of police brutality victims reacted angrily. Until then, the foundation had not been transparent with the most devoted BLM organizers, many of whom accused national leaders of shutting them out of decisions on how financial resources would be allocated.

In a recent AP interview, BLM co-founder Patrisse Cullors acknowledged the foundation was ill-prepared to handle the moment. The tax filing lists Cullors as an uncompensated founder and executive director. She resigned last year.

For all the questions raised about its oversight, the BLM foundation’s tax filing shows its stewards haven’t squandered donations. Nearly $26 million, or 70% of its expenses in the last fiscal year, were grants.

Twelve chapters, including those in Boulder, Colorado, Boston, Washington, D.C., Detroit, Los Angeles, Gary, Indiana, and Philadelphia, received pledges for grants of up to $500,000 each. The family foundations created in honor of Trayvon Martin, Oscar Grant and George Floyd each received contributions of $200,000.

The Michael O.D. Brown: We Love Our Sons & Daughters Foundation, run by Michael Brown Jr.’s mother, Lezley McSpadden, was approved for a larger grant of $1.4 million. McSpadden is happy to have the BLM foundation’s support, a Brown foundation representative said.

"This 990 reveals that (the BLM foundation) is the largest Black abolitionist nonprofit organization that has ever existed in the nation’s history. What we’re doing has never been done before," said Shalomyah Bowers, who serves as the foundation’s board secretary.

Earlier this month, the foundation announced Bowers as one of three members of its board of directors. He serves with board chair Cicley Gay, a communications professional with more than 20 years of experience in nonprofit and philanthropic organizations, and D’Zhane Parker, a member of BLM’s Los Angeles chapter whose work focuses on the impact of mass incarceration on families.

To get here, the foundation has relied on a small grouping of consultants, some of whom have close ties to founders and other BLM organizers. For example, the tax filing shows the foundation paid nearly $970,000 to Trap Heals LLC, a company founded by Damon Turner, who fathered a child with Cullors; and $840,000 to Cullors Protection LLC, a security firm run by Paul Cullors, Patrisse’s brother.

Bowers, who has previously served as deputy executive director, is founder and president of a firm that received the lion’s share of money spent on consultants in the last fiscal year. Bowers Consulting provided much of the foundation’s operational support, including staffing, fundraising and other key services and was paid more than $2.1 million, according to the tax filing.

The foundation’s reliance on consultants is not unusual for newer nonprofits, Mittendorf said. But having clear policies around business transactions could reduce any appearance of impropriety, he said.

The tax filing indicates the foundation has a conflict-of-interest policy. And Bowers said the last BLM board approved the contract with his firm when he was not a board member.

The foundation will launch a "transparency and accountability center" on its website to make its financial documents available for public inspection, Bowers said.