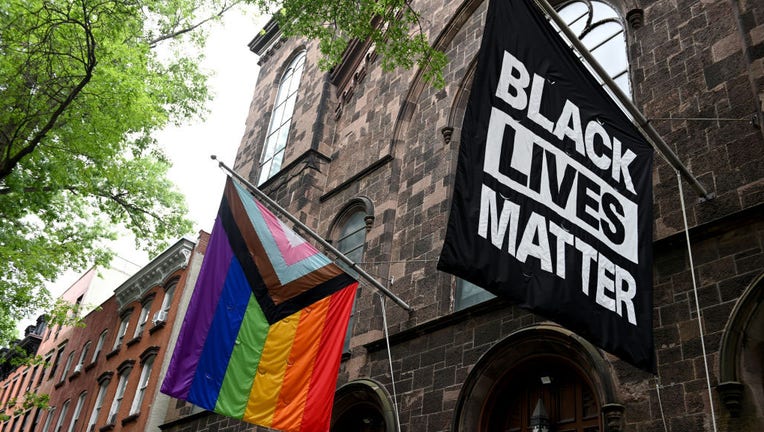 A progress pride flag and a Black Lives Matter flag are displayed outside a church. (Alexi Rosenfeld/Getty Images)

WORCESTER, Massachusetts - A bishop says that a Massachusetts middle school cannot identify itself anymore as a Catholic school after refusing to take down "Black Lives Matter" and Gay Pride flags hanging outside the school.

Bishop Robert J. McManus issued a decree on June 16 punishing the Nativity School in Worcester, Massachusetts for flying the flags at the institution, according to the Roman Catholic Diocese of Worcester website.

In his decree, McManus referenced an open letter he wrote on May 4 where he said the flags embody what he described as "specific agendas or ideologies that contradict Catholic social and moral teaching." He added that the "Gay Pride flag represents support for gay marriage and actively living an LGBTQ+ lifestyle."

The Nativity School in Worchester serves 5th through 8th-grade boys from communities in need.

The decree prohibits the school from identifying itself as a "Catholic" school and may no longer use the title "Catholic" to describe itself, and the institution cannot participate in fundraising activities within the Diocese of Worcester.

Nativity School President Thomas McKenney wrote a letter to the community on the school’s website on June 15 addressing the matter. McKenney says the institution began flying the flags outside the school in January based on the students (the majority of the students are people of color) wanting to make the community more inclusive.

McKenney wrote that McManus told the school in March to remove the flags. During that same month, the flags were torn down by an unknown person. The president added that the bishop informed the school in May if the flags weren’t removed, the institution would "be prohibited from identifying itself as a Catholic school."

The president in the letter says the Nativity School will appeal the decision of the Diocese to remove their Catholic identity.

"Nativity will continue to display the flags in question to give visible witness to the school’s solidarity with our students, families, and their communities. Commitment to our mission, grounded and animated by Gospel values, Catholic Social Teaching, and our Jesuit heritage compels us to do so."