WASHINGTON - President Joe Biden is set to visit North Carolina on Thursday to encourage COVID-19 vaccinations in the region as White House officials prepare to fall just short of his 70% goal by July 4.

Biden will travel to a vaccination center in Raleigh to meet with workers and volunteers as part of a "national month of action" to drive up COVID-19 vaccines. The president will also give remarks at 5:15 p.m. ET.

In May, Biden set an ambitious goal of at least 70% of American adults to have received at least one dose of a vaccine by Independence Day. Currently, 65.6% of adults have gotten at least one jab — and 56.1% are fully vaccinated, according to data shared by the U.S. Centers for Disease Control and Prevention.

With the holiday quickly approaching, the White House acknowledged this week that Biden will come up just short of the 70% goal and an associated aim of fully vaccinating 165 million adults in the same time frame. The missed milestones are notable in a White House that from the outset has been organized around a strategy of underpromising and overdelivering for the American public.

White House officials, while acknowledging they are set to just miss the goal, insist they’re unconcerned.

"We don’t see it exactly like something went wrong," press secretary Jen Psaki said earlier this week, stressing that Americans’ lives are still better off than they were when Biden announced the goal.

The White House says President Joe Biden is setting a new vaccination goal to deliver at least one dose to 70 percent of adult Americans by July 4.

Back in March, Biden projected a July Fourth holiday during which Americans would be able to safely gather in small groups for outdoor barbecues — a milestone reached by the U.S. months ago. Nearly all states have lifted their virus restrictions, businesses and schools are open and large gatherings are resuming nationwide.

"The most important metric at the end of the day is: What are we able to do in our lives? How much of ‘normal’ have we been able to recapture?" said Surgeon General Vivek Murthy. "And I think what we are seeing now is that we have exceeded our expectations."

Several officials in the Biden administration involved in the U.S. vaccination campaign pointed to a combination of factors for not reaching the 70% goal, such as a lessened sense of urgency that followed early success in the campaign and a decision to aim higher than a play-it-safe goal, according to the Associated Press. The outlet said the officials spoke on the condition of anonymity.

They also pointed to unexpectedly strong defiance among some Americans toward getting the COVID-19 vaccine.

A drop-off in vaccination rates was always expected by the White House, but not as sharp as has proved to be the case. The scale of American reluctance to get vaccinated remains a source of global curiosity, particularly as many nations are still scrambling for doses to protect their most vulnerable populations.

When the 70% goal was first announced by Biden seven weeks ago, on average more than 800,000 Americans were getting their first vaccine dose each day — down from a high of nearly 2 million per day in early April. Now that figure is below 300,000. 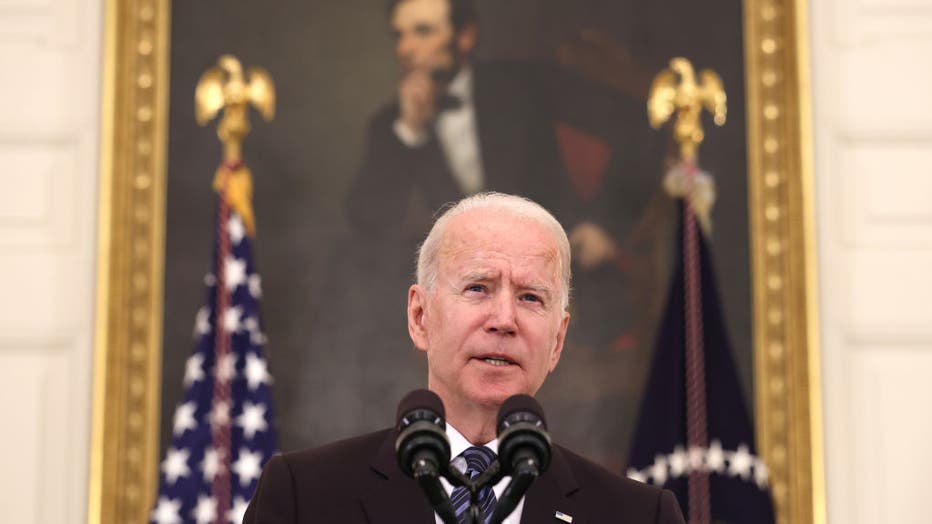 Regardless, the Biden administration is continuing to roll out increasingly localized programs and incentives to encourage specific communities to get vaccinated. Rather than the 70% goal, officials say the more significant statistic is the vast regional disparities in vaccination, with a state like Vermont vaccinating more than 80% of its population while some in the South and West are below 50%.

Last week, Vice President Kamala Harris visited South Carolina as part of the vaccine push. Speaking to a crowd of more than 150 people, Harris stressed the effectiveness and safety of the vaccines amid vaccine skepticism and waning demand for the shots.

Within states, there's even greater variation. In Missouri, some southern and northern counties are well short of 40% and one county is at just 13%.

Vice President Kamala Harris visited Greenville, South Carolina, on June 14, 2021, as part of a nationwide COVID-19 vaccine push ahead of the 4th of July.

Meanwhile, the White House has also sought to crunch the vaccination numbers in new ways to put a positive spin on the situation. On Tuesday, the White House announced that 70% of adults 30 and over have been vaccinated and expects to meet it for those age 27 or older by the July 4 holiday.

Administration officials said they were redoubling their focus on vaccinating younger Americans age 18-26, who have proved to be least likely to get a vaccine when it’s available for them. Concern has also grown about the spread of a new coronavirus variant, first identified in India, that is now taking hold in the U.S. and is highly transmissible.

Dr. Anthony Fauci warned Tuesday that the Delta variant has climbed to now account for over 20% of sequenced samples in the U.S. and seems to be doubling every two weeks.

"Similar to the situation in the U.K., the Delta variant is currently the greatest threat in the U.S. to our attempt to eliminate COVID-19," Fauci said. "Good news, our vaccines are effective against the Delta variant."

COVID-19 surges: Dr. Fauci says everyone needs to get vaccinated as soon as possible

Dr. Anthony Fauci warns during a White House COVID-19 Task Force meeting that those who don't get vaccinated may risk localized surges in their communities.

Health officials are concerned about the variant taking root in unvaccinated corners of America. Rural sections of Missouri, including Springfield and Branson, have seen a dramatic spike in COVID-19 hospitalizations in recent weeks that health officials attribute in part to the delta variant spreading among younger, unvaccinated residents.

Mississippi, Louisiana, Wyoming, Alabama and Idaho are all below 40% of their population with at least one dose of vaccine.

Meanwhile, the variant is accounting for half of the new infections in the regions that include Iowa, Kansas, Missouri, Nebraska, Colorado, Montana, North Dakota, South Dakota, Utah and Wyoming.