WASHINGTON (AP) - Within weeks of Inauguration Day on Jan. 20, the Biden administration had reversed many of the most maligned Trump-era immigration policies, including deporting children seeking asylum who arrived alone at the U.S.-Mexico border and forcing migrants to wait in Mexico as they made their case to stay in the United States.

While the administration was working on immigration legislation to address long-term problems, it didn’t have an on-the-ground plan to manage a surge of migrants. Career immigration officials had warned there could be a surge after the presidential election and the news that the Trump policies, widely viewed as cruel, were being reversed.

Now officials are scrambling to build up capacity to care for some 14,000 migrants now in federal custody — and more likely on the way — and the administration finds itself on its heels in the face of criticism that it should have been better prepared to deal with a predictable predicament.

"They should have forecasted for space (for young migrants) more quickly," said Ronald Vitiello, a former acting director of Immigration and Customs Enforcement and chief of Border Patrol who has served in Republican and Democratic administrations. "And I think in hindsight, maybe they should have waited until they had additional shelter space before they changed the policies."

The situation at the southern border is complex. 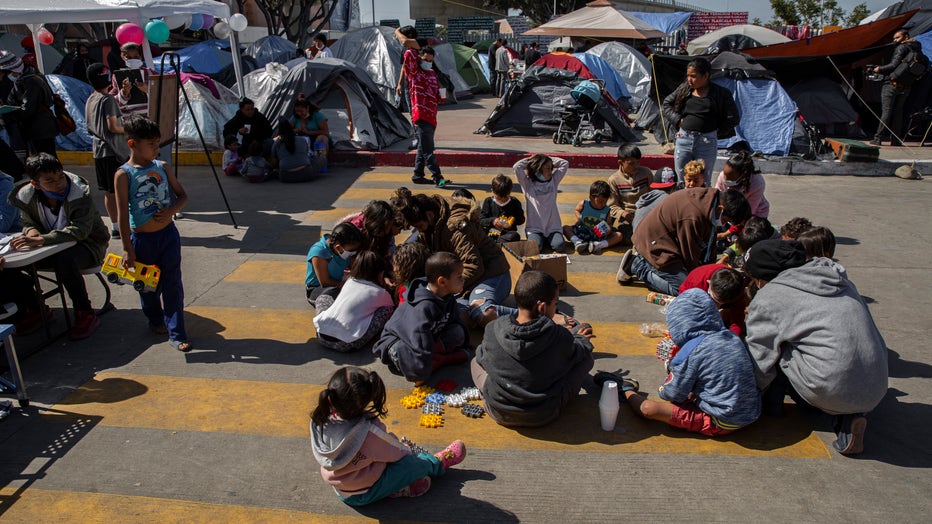 17 March 2021, Mexico, Tijuana: Children from Central America are taught and play at a migrant camp on the grounds of the National Institute for Migration near the "El Chaparral" border crossing. Just over 14,000 unaccompanied migrant minors and refu

Since Biden’s inauguration, the U.S. has seen a dramatic spike in the number of people encountered by border officials. There were 18,945 family members and 9,297 unaccompanied children encountered in February — an increase of 168% and 63%, respectively, from the month before, according to the Pew Research Center. That creates an enormous logistical challenge because children, in particular, require higher standards of care and coordination across agencies.

Career immigration officials, overwhelmed by the earlier surges, have long warned the flow of migrants to the border could ramp up again.

Migrant children are sent from border holding cells to other government facilities until they are released to a sponsor. That process was slowed considerably by a Trump administration policy of "enhanced vetting," in which details were sent to immigration officials and some sponsors wound up getting arrested, prompting some to fear picking up children over worries of being deported. Biden has reversed that policy, so immigration officials hope the process will speed up now.

Biden administration officials have repeatedly laid blame for the current situation on the previous administration, arguing that Biden inherited a mess resulting from President Donald Trump’s undermining and weakening of the immigration system.

The White House also points to Biden’s decision to deploy the Federal Emergency Management Agency, known for helping communities in the aftermath of a natural disaster, to support efforts to process the growing number of unaccompanied migrant children arriving at the border.

Biden and others have pushed back on the notion that what’s happening now is a "crisis."

"We will have, I believe, by next month enough of those beds to take care of these children who have no place to go," Biden said in a recent ABC News interview, when asked whether his administration should have anticipated the surge in young unaccompanied migrants as well as families and adults. He added, "Let’s get something straight though. The vast majority of people crossing the border are being sent back ... immediately sent back."

Adam Isacson, an analyst at the human rights advocacy group Washington Office on Latin America, said Republicans’ insistence that there is a "crisis" at the border is overwrought, but that the surge in migrants was predictable.

He called it a perfect storm of factors: hurricanes that hit Central America last fall; the economic fallout caused by the coronavirus pandemic; typical seasonal migration patterns; the thousands of Central American migrants already stuck at the border for months; and the persistent scourge of gang violence afflicting Northern Triangle countries — Guatemala, Honduras and El Salvador.

Isacson said the Biden administration may have been "two or three weeks" slow in preparing for the increase in unaccompanied young migrants and the subsequent housing crunch after announcing in early February it would stop deporting unaccompanied youths.

But Isacson added that the bottleneck was also affected by the lack of cooperation by the Trump administration with the Biden transition.

The Biden administration announced on Feb. 2 it would no longer uphold the Trump administration policy of automatically deporting unaccompanied minors seeking asylum. Two weeks later, the White House announced plans to admit 25,000 asylum-seekers to the U.S. who had been forced to remain in Mexico.

In subsequent weeks, the number of young migrants crossing without adults skyrocketed. Both Customs and Border Protection, and Health and Human Services officials have struggled to house the influx of children. Immigration officials say the number of adult migrants and families trying to enter the U.S. illegally also has surged.

Border patrol officials had encountered more than 29,000 unaccompanied minors since Oct. 1, nearly the same number of youths taken into custody for all of the previous budget year, administration officials say.

"Getting capacity up to deal with the unaccompanied minors is critical, but the numbers just don’t bear out to pointing to a crisis," Isacson said.

"It’s more than a crisis. This is a human heartbreak," said McCarthy, who led a delegation of a dozen fellow House Republicans to El Paso, Texas, on Monday.

Biden is also facing criticism from Republicans that his administration has sent mixed messages.

Critics have focused on public comments from Homeland Security Secretary Alejandro Mayorkas, who earlier this month said the administration’s message to migrants was "don’t come now" and a slip by Roberta Jacobson, the White House’s lead adviser on the border, who said in Spanish during a recent briefing the "border is not closed," before correcting herself.

The president and other administration officials in recent days have stepped up efforts to urge migrants not to come. Embassies in Northern Triangle countries are airing public service announcements underscoring the dangers of making the trek north.

Eric Hershberg, director of the Center for Latin American and Latino Studies at American University, said Biden’s team faces a powerful counter-narrative as it attempts to persuade desperate Central Americans to stay put: chatter on social media from migrants who successfully made it across the border and smugglers who insist that now is the ideal time.

Hershberg cites a Honduran friend’s reaction to U.S. warnings that migrants could face danger on the journey: "You know, you don’t need to go with such uncertainty. You can just stay here and know that you’ll be raped or killed."