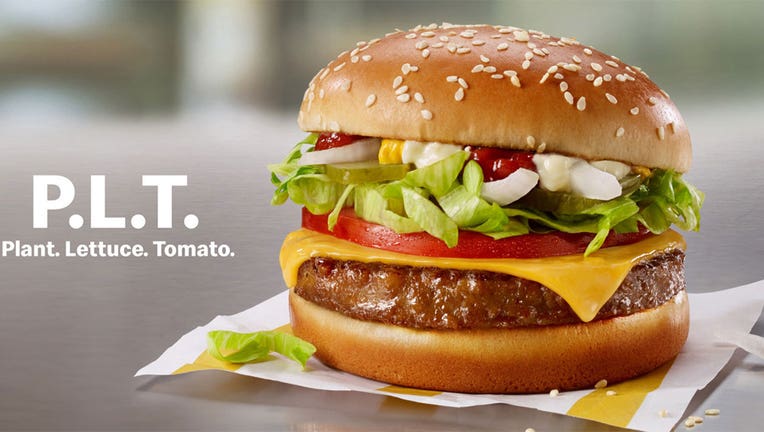 NEW YORK - McDonald's has ended a trial run of a plant-based burger with no announced plans to permanently add it to the menu.

Major companies typically launch a new product with a lot of fanfare but don't often draw attention to when that hyped offering gets pulled or otherwise comes to an end.

McDonald's initially launched the burger, called the P.L.T. (Plant Lettuce Tomato), in late September 2019 in 28 restaurant locations in Ontario for a 12-week trial.

"McDonald's has a proud legacy of fun, delicious and craveable food—and now, we're extending that to a test of a juicy, plant-based burger," Ann Wahlgren, a McDonald's executive, said in a press release at the time. "We've been working on our recipe and now we're ready to hear feedback from our customers."

Then in January, the fast-food giant announced the trial was expanding to 52 restaurants for another 12 weeks. That means the testing's scheduled conclusion in April came just as the global coronavirus outbreak was spreading in North America and local governments were implementing stay-at-home orders and shuttering nonessential businesses.

The trial apparently ended as planned without any further announcement. A webpage promoting the P.L.T. that was launched in September — mcdonalds.ca/plt — now redirects to a 404 page that states, "How did you get here?! It's cool. We'll help you out. It doesn't look like the page you're searching for exists."

In response to an April 28 tweet from a consumer asking what had happened to the P.L.T., McDonald's Canada said the burger was tested through April 6.

"We have no current plans to bring it back to our menu at this time," McDonald's Canada tweeted. "However, we will be sure to share your feedback with our team for future consideration."

Through Thursday, June 25, Ontario has had 35,861 lab-confirmed COVID-19 cases and  2,690 deaths, according to the Johns Hopkins University Coronavirus Resource Center.