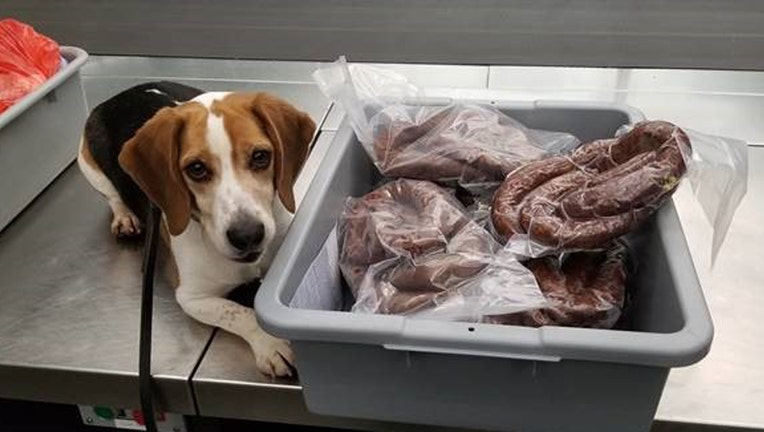 NEWARK, N.J. - A sharp-nosed Homeland Security dog sniffed out some illegal and potentially dangerous swine meat inside a suitcase at Newark Liberty International Airport on Friday.

U.S. Customs and Border Protection agriculture specialists and their dogs were examining luggage that had arrived at Newark from Kosovo on Jan. 8 when one dog — a beagle named Kody — alerted his handler to "a suspicious suitcase," authorities said in a news release.

A passenger claimed the suitcase and told authorities he had some "homemade sausages" inside.

CBP opened the luggage and confiscated about 88 pounds of sausage made from pork meat, which is prohibited from import from certain countries under U.S. Department of Agriculture regulations due to risk of swine vesicular disease.

"The importation of swine meat, though seemingly harmless to the general public, could cause grave damage to our economy and agricultural industry," Field Operations Director Troy Miller of the New York Field Office said in a statement, "and CBP does its part in keeping these prohibited items from entering the United States."

Authorities let the passenger go without penalty because he had declared the meat.

U.S. Customs authorities have been busy confiscating illegal and potentially dangerous food products at airports in the New York area during and after the holiday season. On Jan. 3, CBP seized 9 pounds of packaged bushmeat from a passenger who arrived at Newark from Ghana. And the next day, an agriculture specialist at Kennedy Airport took 20 pounds of swine meat and 30 metal containers of a food product known as bird's nests from a traveler from China.