BALLINA, Ireland (AP) - Joe Biden is somewhat removed from the Irish town his great-great-great-grandfather left almost 200 years ago, but that is not stopping Ballina from celebrating his presidential victory.

The town in County Mayo, about 145 miles (235 kilometers) northwest of Dublin, has for days been draped in the Stars and Stripes and Biden/Harris banners in anticipation, even though many businesses have had to close due to lockdown restrictions.

Joe Blewitt, a heating and plumbing engineer and a cousin of Biden’s, said the town of about 10,000 is ecstatic at the prospect of a President Joe Biden.

“Now he’ll be the President of the United States, they’re delighted, they’re absolutely delighted,” Blewitt said. “To think one of their own is one of the most powerful men in the world.”

Blewitt, who was invited to the White House in 2017 when Biden was awarded the Congressional Medal of Honor from President Barack Obama, said he hopes to be able to make it over again for the inauguration in January.

Blewitt says the pair are in regular contact too: “He’s a really nice fella. He’s good to talk to.”

Biden, who visited Ballina in June 2016 when he was in his final few months as vice president, has pledged to visit again were he to prevail over Trump.

Biden’s great-great-great-grandfather Edward Blewitt emigrated from the town, having worked as a brick-maker and as a civil engineer helping to map Ireland. Ten of Biden's 16 great-great grandparents were also born in Ireland. 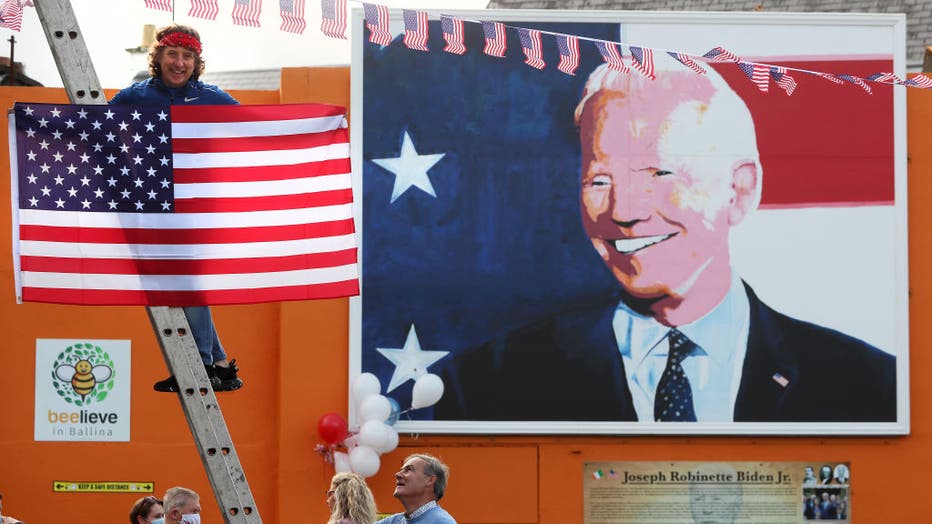 A man erects flags and bunting as residents of Ballina, Co. Mayo, Ireland, begin celebrations in the ancestral home of US Presidential candidate Joe Biden in anticipation of the results of the US election as Biden edges closer to victory over Donald

Biden’s victory was especially sweet for Beryl McCrainey Slevin, a California native who has lived in Ballina for more than 15 years.

Her hope is that Biden will be able to reunite her homeland after a divisive four years under Trump.

“I’m hoping that after this election we can really work on building alliances with everyone in the country,” she said. “We are all American and the ideals of America are so important globally, that I think it’s really important that we come together once again as a nation and continue the work of building the American dream for everyone.”

She also laid out her hope that Biden will “bring back dignity” to the White House and help heal the racial problems afflicting the U.S.

“I also feel very strongly that Joe Biden is in a place now that he’s ready to do serious justice reform, police reform nationally,” she said.

Cousin Blewitt is not ruling out the possibility of a Joe Biden plaza in Ballina, akin to the one built in Moneygall to honor Barack Obama when he visited his own ancestral home in southeast Ireland.

Irish prime minister Micheal Martin was one of the first leaders to congratulate Biden on his victory, a clear sign of how much Biden’s victory means to the country.

“Joe Biden has been a true friend of this nation throughout his life and I look forward to working with him in the years ahead,” he said in a tweet. “I also look forward to welcoming him back home when the circumstances allow.”