Norwegian food blogger Julie Christensen caught this breach of travel etiquette on camera during a flight from Athens to Amsterdam.

Talk about a hairy situation.

A woman on an Aegean Airlines flight from Athens to Amsterdam on Sept. 29 was caught draping her long hair over the back of her seat.

The passenger behind her just happened to be food blogger and traveler Julie Christensen — who captured the moment on camera and called the passenger's travel etiquette into question.

In an interview with Fox News Digital, Christensen said the passenger seated in front of her left her hair over the seat for most of the trip.

At one point, the long brunette locks reached Christensen’s tray table and even flirted with the top of her coffee cup.

Christensen said she was too tired to confront the woman — their flight had already been delayed — but she thought to herself that this behavior was a little odd. 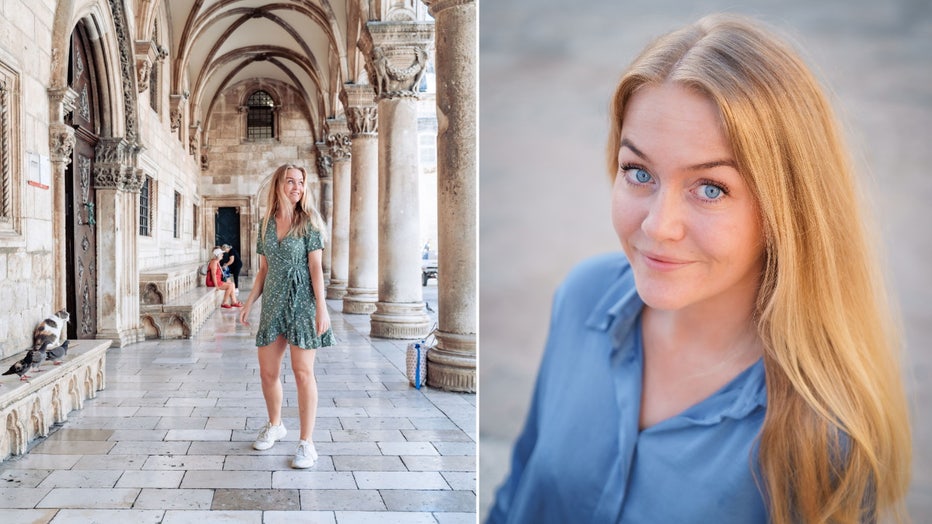 Since Christensen was sitting in an emergency aisle with extra legroom, she explained that it "didn’t bother" her that much.

Still, the Norwegian social media influencer decided to record the moment instead — which she later posted on TikTok.

TIKTOK ADDICTION: EXPERTS WEIGH IN ON THE SOCIAL MEDIA CRAZE AND WHAT'S BEHIND THE APP'S ‘MASSIVE’ INFLUENCE

The video went viral, hitting at least 3.2 million views as of publication time.

They also challenged Christensen to get revenge by dipping strands of the woman's hair into her coffee cup — something the blogger said she'd "never do."

"People get fired up because it’s a very rude thing to do," she said. "Maybe other people would’ve reacted differently or even aggressively to this, but, for me — I’m used to it.

"I just found it really cute and funny."

Christensen stressed that it’s important to always "be nice" to others, especially in situations like this one — and etiquette expert Jacqueline Whitmore agreed with that.

Whitmore, founder and director of The Protocol School of Palm Beach, told Fox News Digital in an interview that the polite way to approach such a situation is with kindness.

ROMANCE IN AMERICA: 5 HONEYMOON DESTINATIONS IN THE USA WORTH CONSIDERING

"Anything can be handled if you say it kindly," she said.

The etiquette expert instructed passengers who might find themselves in similar situations to kindly approach the person who's causing a problem.

If the person does not correct the behavior, Whitmore suggested then alerting a flight attendant.

"I would say something like, ‘Excuse me, your beautiful hair is getting in my coffee,'" she said as one example of how to handle it.

"When you sound like you’re looking out for the other person’s best interest, it makes it not all about you," she said.

Whitmore’s definition of etiquette is being mindful of how certain behaviors impact other people.

"So, whenever you’re doing something knowingly or unknowingly to irritate or agitate, then it could potentially be a breach of etiquette," she said.

Whitmore, a former flight attendant herself, explained that it’s important for passengers to keep spatial awareness in mind, since respecting personal space is a major issue when flying.

HOW TO ROAD TRIP WITH KIDS, FROM PARENTS WHO LIVE IN A BUS YEAR-ROUND

"As long as you and your personal belongings aren’t encroaching on someone else’s, then it’s usually not a problem," she said.

"Make sure you pack your manners and be aware of your surroundings," she said. "And be aware of how the behavior of your children affects other people as well."

Florida-based Whitmore added that there are plenty of other violations of etiquette that occur when cramped into the tight space of an airplane.

These can include placing feet on seat backs, leaving trash behind, listening to electronic devices without headphones, stowing luggage in the improper space, having loud conversations and allowing children to act out of control.

ARE YOUR TABLE MANNERS UP TO SNUFF? ETIQUETTE EXPERT CALLS OUT 12 TACKY HABITS

Whitmore prompted parents to "be prepared" before flying with small children by packing snacks, games, coloring books and any other items to "keep the child engaged."

Children who throw tantrums and are unable to be soothed may be experiencing ear pain due to elevation; in that case, Whitmore suggested giving the child a bottle or pacifier to alleviate pain from the air pressure.

"If you are a passenger and a child is perpetually kicking your seat, grabbing the top of your seat or thumping the tray table behind you, kindly let the child’s parent know that this is disturbing you," she said. "It’s best that you don’t discipline someone else’s child."

She added, "It’s the responsibility of the parents to make sure their children don’t disturb others — but if it happens, apologize and try to correct the situation the best you can."

Whitmore pointed out that etiquette is "not necessarily black or white" but rather situational.

"And often, things that happen on a plane are situational," she said.