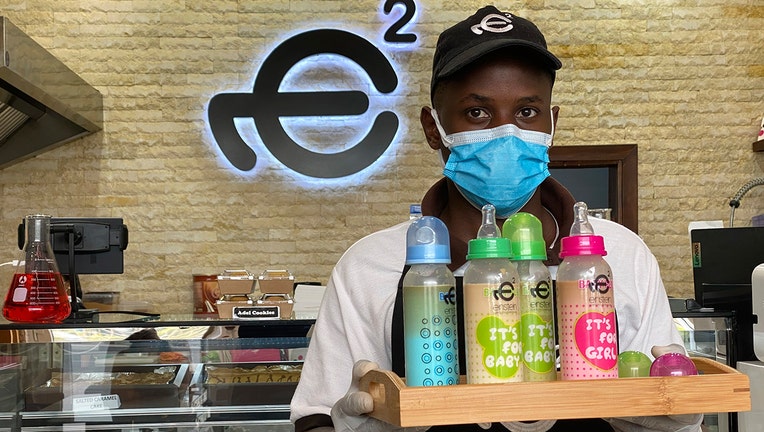 A waiter poses with a tray of baby bottles that he brought out from storage, at Einstein Cafe in Dubai, United Arab Emirates, Sunday, March 14, 2021. (AP Photo/Kamran Jebreili)

The fad began at Einstein Cafe, a slick dessert chain with branches across the region, from Dubai to Kuwait to Bahrain. Instead of ordinary paper cups, the cafe, inspired by pictures of trendy-looking bottles shared on social media, decided to serve its thick milky drinks in plastic baby bottles.

Although the franchise was no newcomer to baby-themed products — a milkshake with cerelac, the rice cereal for infants, is a long-standing bestseller — the unprecedented fervor over the feeding bottles came as a bit of a shock. All the stress and anxiety over the coronavirus pandemic appears to have spurred some to find an outlet in the strange new craze.

"Everyone wanted to buy it, people called all day, telling us they’re coming with their friends, they’re coming with their father and mother," Younes Molla, CEO of the Einstein franchise in the United Arab Emirates, told The Associated Press this week. "After so many months with the pandemic, with all the difficulties, people took photos, they had fun, they remembered their childhood."

Lines clogged Einstein stores across the Gulf. People of all ages streamed onto sidewalks, waiting for their chance to suck coffee and juice from a plastic bottle. Some patrons even brought their own baby bottles to other cafes, pleading with bewildered baristas to fill them up.

Pictures of baby bottles filled with colorful kaleidoscopes of drinks drew thousands of likes on Instagram and ricocheted across the popular social media app TikTok. A cure for the world’s uncertainty? A response to some primal instinct? Either way, a trend was born.

"People were so angry, they said horrible things, that we were an ‘aeb,’ to Islam and the Muslim culture," said Molla, using the Arabic term for shame or dishonor.

Last week, the anger reached the highest levels of government. Dubai authorities cracked down. Inspection teams burst into cafes where the trend had taken off and handed out fines.

"Such indiscriminate use of baby bottles is not only against local culture and traditions," read the government statement, "but the mishandling of the bottle during the filling could also contribute to the spread of COVID-19," an apparent reference to those bringing their used bottles to other cafes.

Authorities, the statement added, had been "alerted to the negative practice and its risks by social media users."

Backlash also came from Kuwait, where the government temporarily shut down Einstein Cafe, and from Bahrain, where the Ministry of Commerce sent police armed with live cameras into cafes and warned all dining establishments that serving drinks in feeding bottles "violates Bahraini customs and traditions."

Oman urged citizens to report baby bottle sightings to the Consumer Protection Authority hotline. Saudi Twitter users and media personalities condemned the trend in the harshest terms, with popular news website Mujaz al-Akhbar lamenting that the kingdom's "daughters have suffered from a loss of modesty and religion."

It’s not the first time that the guardians of local customs in Gulf Arab countries have focused their ire on social media phenomena. Vague laws across the region lend authorities broad power to stamp out public immorality and indecency. Emirati officers last spring, for instance, arrested a young expat for posting a video on TikTok in which he sneezed into a banknote, accusing him of "harming" the UAE’s reputation and its institutions.