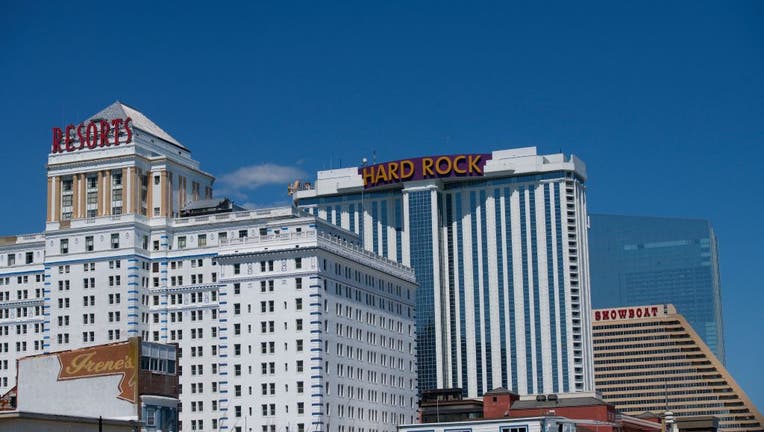 A general view of Resorts, Hard Rock, Showboat, and Ocean Casino during the coronavirus pandemic on May 7, 2020 in Atlantic City, New Jersey. (Photo by Mark Makela/Getty Images)

ATLANTIC CITY, N.J. - Three years ago, when two shuttered Atlantic City casinos came back to life, there was more than a little skepticism over whether it was a good idea to add two casinos to a market that had just lost five of them.

But now there is little doubt that those two casinos — Hard Rock and the Ocean Casino Resort — have succeeded in grabbing their share of a cutthroat market and giving visitors new reasons to come to Atlantic City.

Both casinos had their first full day of operations on the same day: June 28, 2018.

In terms of the amount of money won from in-person gamblers, Hard Rock ranked second out of the nine casinos last year with $224.8 million. Ocean was third at $183.5 million.

Their performance has shaken up the Atlantic City market, forming a new Big 3: Market-leader Borgata and the two newcomers. (When internet and sports betting money is included, Borgata, Golden Nugget and Hard Rock ranked 1-2-3 last year.)

"The change this past year of Hard Rock and Ocean to not only become comparable to Borgata but to overtake the Caesars Entertainment properties has been remarkable," said Joe Lupo, Hard Rock's Atlantic City president.

"Where we are today versus where we were is truly night and day," added Terry Glebocki, Ocean's CEO. "The first 12 months the property was open, we lost $42 million. The most recent 12 months, including what I anticipate this month, we won $55 million."

Jane Bokunewicz, coordinator of the Lloyd Levenson Institute at Stockton University, said both casinos brought something new to the table.

"Hard Rock’s focus on live entertainment with a full calendar of top artists pre- and post-pandemic breathed new life into a property that was built for shows and events," she said. "Ocean retooled the former Revel property, adding casino amenities and maximizing the existing assets of the building, to create a luxury resort with a strong casino product."

She added that both casinos could do better in terms of internet gambling, which is steadily growing in Atlantic City.

In interviews with The Associated Press, numerous customers said they liked Ocean's floor-to-ceiling glass walls that allow gamblers to look out on the beach and ocean. The also liked the casino's pools and outdoor spaces.

Hard Rock was almost universally described as the brightest casino in town — but not everyone saw that as a positive. Customers are impressed by its live entertainment and music memorabilia, but wish there was an outdoor pool.

"Ocean and Hard Rock have the best coexistence without stepping in each other’s lanes," said Cortney Conklin of Galloway, a frequent visitor to both places. "Ocean has a wide-open. more relaxed, artsy vibe, while Hard Rock is high-energy and bright. They both keep high standards for service and player treatment while amping up their own unique draws."

Both casinos were reborn out of failure — and none was more spectacular than Ocean's predecessor, Revel. Opened in 2012 at a cost of $2.6 billion, it never came close to turning a profit, went bankrupt twice, and closed in 2014.

It reopened as Ocean under the ownership of Colorado developer Bruce Deifik, who bought the shuttered property sight unseen.

But Deifik quickly ran out of money, and a New York hedge fund, Luxor Capital Group, that had lent him millions took over the property in return for canceling the debt. Deifik died in a car crash in Denver in April 2019.

Luxor gave Glebocki straightforward marching orders: Reverse the current financial situation, in which the casino was spending too much money and not bringing enough in. A series of reinvestments in the property included a revamping of the meandering casino floor to make it easier to navigate, a new high-limit table games area, a new Asian gambling space and new guest lounges for holders of its loyalty card.

It worked. Ocean won $183.5 million from gamblers inside its casino last year. Its gross operating profit was $21.8 million, up 224% from a year earlier.

Hard Rock occupies the building that used to house the Trump Taj Mahal casino, which closed in 2016.

The company gutted the building from top to bottom, and imported planeloads of its trademark music memorabilia from a collection that is the world's largest. Visitors walking in the front entrance pass mannequins wearing the Beatles' suits, standing in front of Elvis Presley's Rolls Royce, near one of Michael Jackson's sequined gloves, one of Cher's many dresses, and guitars from hundreds of artists including Jimi Hendrix and Prince.

Hard Rock won $224.8 million from in-person gamblers in 2020, second only to the Borgata, which won more than $100 million more. Hard Rock's gross operating profit last year was $10.9 million, down 71% from a year earlier.