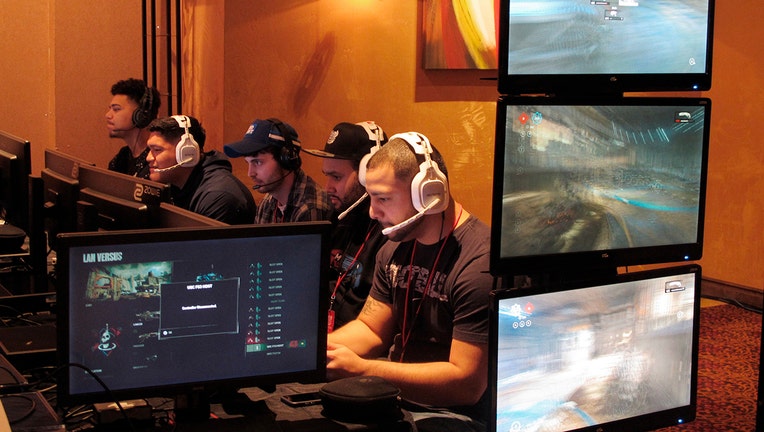 Video game players compete against one another in an esports tournament at Caesars casino in Atlantic City, N.J., on March 31, 2017. (AP File Photo)

ATLANTIC CITY, N.J. (AP) - New Jersey is investing $200,000 in a center to help Atlantic City and the state become a national hub for the billion-dollar competitive video game industry, known as esports.

The New Jersey Economic Development Authority and Stockton University on Tuesday signed an agreement to establish an esports Innovation Center at the university's Atlantic City campus.

The authority will provide staff support for the Innovation Center, which will also include leaders in the esports industry.

It was the latest manifestation of New Jersey's interest in being not only a player but a leader in the fast-growing esports industry. Newzoo, a research firm that tracks the industry, projects it will generate $1.08 billion in global revenue this year, an increase of 14.5% over last year.

"I was shocked when I saw the numbers," said Brian Sabina, the authority's chief economic growth officer. "It's the fastest-growing college sport in America. Nearly 500 million people tune in to watch esports events."

It plans to work with private sector companies and other colleges and universities to develop programs teaching the most in-demand skills in the esports industry, will host industry events, and will support esports-related research at New Jersey academic institutions.

Lt. Gov. Sheila Oliver, a Democrat, marveled at the technology involved in esports.

"Just the ability to beat someone on the other side of the globe," she said. "It is the future."

Harvey Kesselman, Stockton's president, said his university sees an opportunity to lead "in this field that we know is going to explode."

Stockton already has a successful competitive esports program for students.

Officials said the industry involves far more than young people playing video games against each other. There is constant software development, ever-evolving video streaming technology, data analysis and other technical work, all of which the center wants to encourage to happen in Atlantic City and New Jersey.

The authority said esports companies including G3 esports, Amazon's Twitch streaming service, esports Entertainment Group, and Harris Blitzer Sports and Entertainment have either made or are planning significant investments in the state.

And people bet on the games, too. Esports is categorically approved for wagering in New Jersey, although the state Division of Gaming Enforcement has to examine and approve individual events.