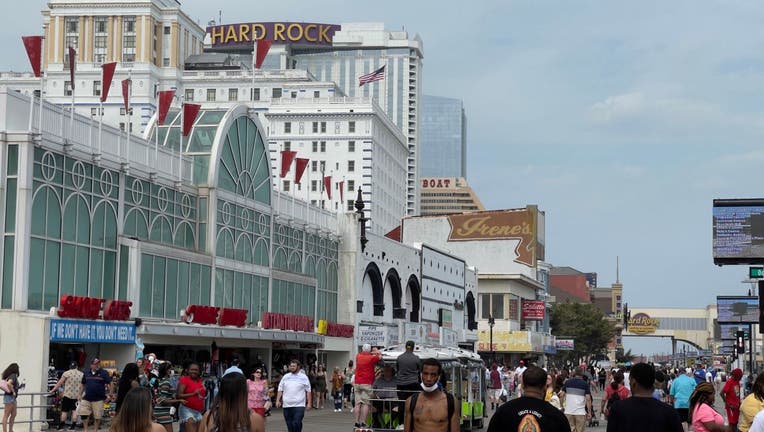 People walk on the boardwalk in Atlantic City, New Jersey, past the Hard Rock Hotel on May 22, 2021. (Photo by Daniel SLIM / AFP)

ATLANTIC CITY, N.J. (AP) - Struggling with a surge in juvenile crime, Atlantic City soon will sound sirens each night at 10 p.m., marking the arrival of a juvenile curfew prohibiting those under 18 from being on the streets.

"It's been a rough few weeks here in Atlantic City," Mayor Marty Small said Thursday at a Boardwalk news conference to announce the policy.

The move comes amid a series of violent incidents involving juveniles in Atlantic City including the death of a Boardwalk merchant who died after an altercation with two juveniles in April.

ATLANTIC CITY RANKED ONE OF THE WORST SMALL CITIES FOR BUSINESS

Earlier this week, A 16-year-old boy was charged with gun and drug offenses after a fight with his 19-year-old brother. Inside their apartment, police found two handguns, hollow-point ammunition, more than five grams of cocaine, and nearly two pounds (900 grams) of marijuana.

James Sarkos, the office in charge of the city's police department, said those under 18 without a parent or guardian need to be off the streets before the siren sounds. Once it does, police officers are authorized to approach and question those who appear to be under the age of 18 to determine their status.

Those found to be in violation of the curfew will be brought to police headquarters and a parent or guardian will need to come get them. The law has been in effect since 2006.

Fines for repeat violations range up to $1,000 and must be paid by a parent or guardian.

The law makes exceptions for youths attending a school function, or carrying out an errand assigned to them by a parent or guardian, provided they return home immediately after completing it, Sarkos said.

Sarkos said minors on the streets after 10 p.m. are more likely to engage in criminal activity, as well as to become the victims of crime.

But he and Small said they realize that simply sounding a siren won't stop crime involving juveniles.

"We're not kidding ourselves; we know there's going to be violations," he said.

And Small said parents need to take more responsibility for their children.

"Government doesn't raise your children," he said. "Government is here to assist. Police your house. You know what's going on. Stop being enablers because some of these young kids are paying the bills."