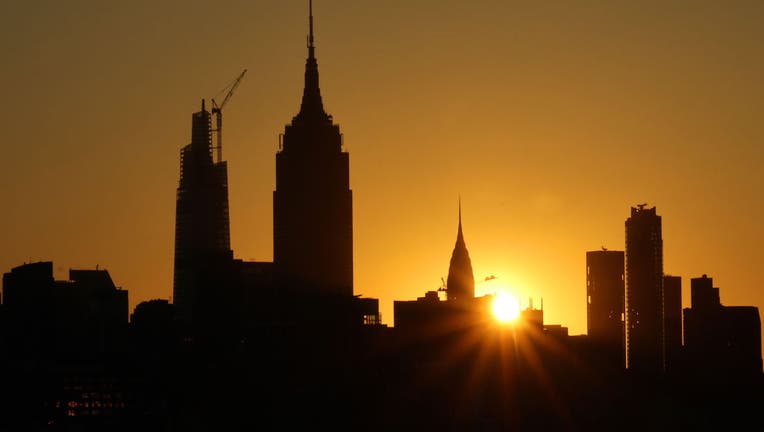 The sun rises behind the Empire State Building, One Vanderbilt and the Chrysler Building in New York City on June 13, 2020 as seen from Jersey City, New Jersey. (Photo by Gary Hershorn/Getty Images)

The subways run, but not all hours, and definitely not with anywhere near as many riders. Your favorite corner deli has your bagel and coffee — as long as you take it to go and wear a mask to get it. Go enjoy the sunshine in a park, but too many other people better not have the same idea.

It begs the question: Who do we become when we can’t be who we were?

New Yorkers, more than in any other place in America, have always accepted as given a cheek-by-jowl existence, treating the streets and subways and parks, their favorite restaurants and bars, the physical geography of the city all as extensions of their own personal space.

“New York City is a different style of life ... of density, of vitality, of 24/7, of no cultural agreement of when we should take a vacation or eat lunch,” says Kenneth T. Jackson, recently retired Columbia University history professor and editor of “The Encyclopedia of New York City.”

“It’s everybody’s second home,” he says. “You can come to New York and find your group. You can’t really say that anywhere else.”

But that was before these last couple of difficult months, when the city immortalized in song and scene as the never-ending hustle and flow of humanity was swapped out for the virus version, of staying near home and social distancing regulations.

The streets have started to wake up in recent weeks. And as recent days of thousands upon thousands of people turning out for anti-police brutality protests have shown, passion for this place, this community, runs deep.

But even that bit of New York spirit carries a risk of an increase in coronavirus cases, as does the mere act of re-opening in itself, as slow a process as that is. The threat of illness and death has abated — for now — thanks to our doing that most un-New York thing of staying away from each other.

The shadow it cast remains, though, as do rules of separation and distance that make the New York City of even three months ago a peripheral vision at best.

In the virus times, the near-term and maybe even longer-term impact is undoubtedly going to be ugly. Job losses have been racking up, businesses facing bankruptcy, cultural institutions going under, entire industries like restaurants forced to reconsider everything they do. Things taken for granted, such as the school day, will look different and be more complicated.

New York City has been shell-shocked before. The raging waters of Superstorm Sandy in 2012 plunged whole neighborhoods into pitch darkness. The attacks of Sept. 11, 2001, covered many in dust clouds.

But “those were temporary cessations. There was always a knowledge that community could refocus and gather again in some number of days,” said Daniel Gallant, executive director of the Nuyorican Poet’s Cafe, the renowned East Village performance spot.

“Even when we feared for the economy, we also knew that New York was going to find a way geographically, financially and as a community, somehow or other, to bounce back,” he says.

And a lot of those people likely aren’t coming back, says Jeremiah Moss, the blogger and author of “Vanishing New York: How a Great City Lost Its Soul.”

But in all the unknowing of what the future holds, there’s also a thread of hope, and of steadfast faith in that other quintessential facet of New York City: that the city will adapt.

Jackson, the historian, takes the long view. “You can’t judge the future by the moment. You’ve got to have the perspective of centuries, really,” he says. “This is not the first time New York has been challenged. It won’t be the last.”

Some take heart from the recent wave of protests themselves, in which New Yorkers turned out to rallies and marches to call for justice for George Floyd, the black Minnesota man killed by a white police officer, and to call out police abuses in New York City alongside.

The passion on display, the willingness to come together, even in defiance of a city-mandated curfew to get off the streets, was heartening, said Keris Lové, 34, a songwriter and activist living in Bronx.

“We’re all out there, you know risking our lives because we imagine something better,” she said. With spirit like that, she figured, New York City would be OK.

Caridad De La Luz agreed. Another Bronx native, the poet and activist had been staying in her neighborhood for weeks, refusing to come into her former stomping grounds of Manhattan. She missed it, and worried what the new normal would be.

Then came the protests, and she found a way. She was still leery of the subway, so she drove, then marched, then took a CitiBike to get back to where her car was.

“We are not afraid anymore,” she said. “We are taking those precautions, but I don’t have the fear that I had a month ago.”

Gallant and others are also in some ways cautiously hopeful that the disruption of the virus will also strike a blow to the forces of expansion and capitalism that have done much in last two decades to make the city harder to afford, and more generic with the mega-chains and big-name stores crowding out the mom-and-pops, the artists, the up-and-comers.

“We know that New York City experienced a lot of upheaval in 1970s, there was a lot that went badly at that time, there were economic challenges then. A lot of fantastic powerful amazing artistic and cultural things happened at that time as well,” he says.

And while many may stay away, there will always be those who are drawn here, no matter the condition of the world, to find their own freedom, whatever form that takes in socially distant times.

“New York will always be a beacon to people who are hungry for what cities have to offer, he says: “Cities from the beginning of cities have been places of liberation.”

Hajela has covered New York for The Associated Press for more than 20 years. Follow her on Twitter at http://twitter.com/dhajela.