Biden says Trump not attending inauguration is a good thing

President-elect Joe Biden said President Donald Trump skipping the inauguration is one of the few things the two have ever agreed on.

"At a time of unprecedented crisis and deep divisions, America United reflects the beginning of a new national journey that restores the soul of America, brings the country together, and creates a path to a brighter future," Biden’s Presidential Inaugural Committee said in a statement on Monday.

The committee said one of Biden’s first acts as president will be to lay a wreath at the Tomb of the Unknown Soldier at Arlington Cemetery "honoring our men and women in uniform who paid the ultimate sacrifice in defense of our common values."

In a show of unity and bipartisanship, the committee said Biden will "be joined by President Barack Obama and Michelle Obama, President George W. Bush and Laura Bush, and President Bill Clinton and Secretary Hillary Clinton."

"This inauguration marks a new chapter for the American people -- one of healing, of unifying, of coming together, of an America united," said Tony Allen, Presidential Committee chief executive officer. "It is time to turn the page on this era of division. The inaugural activities will reflect our shared values and serve as a reminder that we are stronger together than we are apart, just as our motto 'e pluribus unum' reminds us -- out of many, one."

The calls for unity came at what the committee said is one of the most challenging periods in U.S. history. With more than 370,000 Americans lost to the deadly coronavirus and political divisions at a boiling point, the committee wrote, "The moment calls for sober reflection and the mustering of our national resolve. It is also a moment of hope."

The National Park Service announced Monday that the Washington Monument would be closed until Jan. 24 in the wake of the deadly pro-Trump riot inside the U.S. Capitol last week. But plans were still on for a major public art display spanning multiple blocks of the National Mall that will feature 191,500 U.S. flags and 56 pillars of light. The display is meant to symbolize every U.S. state and territory, and "the American people who are unable to travel" to the capital to celebrate. 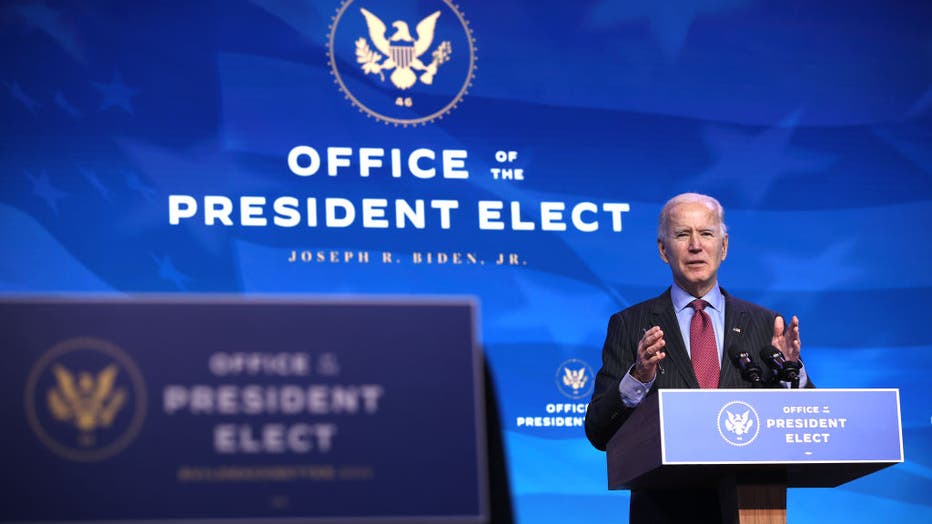 U.S. President-elect Joe Biden delivers remarks after he announced cabinet nominees that will round out his economic team, including secretaries of commerce and labor, at The Queen theater on January 08, 2021 in Wilmington, Delaware.

Last week, President Donald Trump said he will not attend Biden’s inauguration, though Vice President Mike Pence and his wife plan to attend. Trump’s absence will make him the first incumbent president to skip his successor’s swearing-in since Andrew Johnson in 1869.

Biden later said Trump’s decision to not attend is "one of the few things he and I have ever agreed on."

"It’s a good thing, him not showing up," Biden told reporters. "He’s exceeded even my worst notions about him."

On Monday, Trump is issued an emergency declaration for the nation’s capital amid growing concern among local and federal authorities about violence in the leadup to and during President-elect Joe Biden’s inauguration on Jan. 20.

The declaration allows the Department of Homeland Security and Federal Emergency Management Agency to coordinate with local authorities as needed.

The declaration from Trump comes five days after a pro-Trump mob stormed the Capitol as Congress began formally counting the Electoral College votes to certify his defeat to Biden. Five people died.

Trump has spent months complaining, without evidence, that he was cheated out of an election victory by widespread voter fraud, which election officials say does not exist.