An Amazon delivery driver came to the rescue of a 19-year-old and her dog as the two were being attacked by a larger dog in Las Vegas, Nevada, on Dec. 13. (Credit: Michael Ray via Storyful)

A brave Amazon delivery driver rescued a young woman and her dog during a dog attack that was captured on Ring video in Las Vegas, Nevada on Dec. 13.

Editor’s Note: Some may find the video distressing.

In the video, Lauren is seen standing outside when an unknown dog approaches her. She bends down to greet it and pet the dog, which appeared friendly.

The family dog, Max, is then seen leaving the house and approaches the unknown dog when suddenly it starts to attack Max. 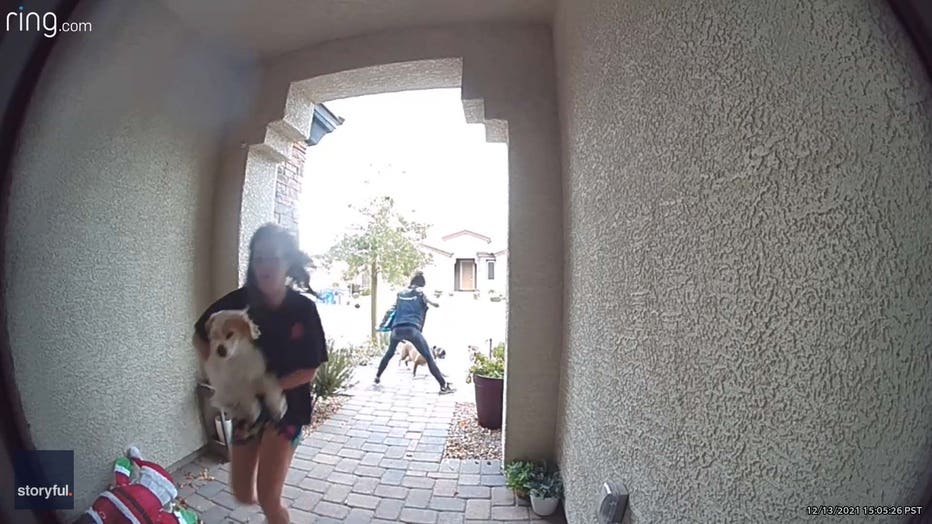 Freeze frame from Ring video showing Lauren and Max running back into the house as Stephanie Lontz distracts an unknown dog.

"My Ring alert went off and I watched the entire situation unfold in front of me," Ray said.

Lauren is seen in the video trying her best to pull the larger dog off of Max and eventually resorted to picking up her own dog, but the unknown dog continued to try and attack Max.

Lauren can be heard screaming for help when her efforts to stop the unknown dog do not work. Suddenly, an Amazon driver, identified by KVVU-TV as Stephanie Lontz, is seen running to help and tells Lauren to go back into the house as she distracts the larger dog.

The unknown dog continued its attempt to pursue Lauren and Max but was thwarted thanks to Lontz blocking its path.

Once both Lauren and Max are safely inside, Lontz is heard yelling, "You’re a bad dog," before leaving to continue her deliveries.

In the original Facebook post, Ray showed his gratitude to the Amazon driver, writing, "She could have easily stayed back, she saw how aggressive the dog was, but came flying in to help without a thought of her own well-being. Plus her telling the dog he was a bad dog at the end of the video is classic!"

According to KVVU-TV, the Ray family was able to track down Lontz and thank her with a bouquet of flowers.

The Ray family and Lontz were reunited, after which a team from Amazon and 702 Logistics, a local courier contracted by Amazon, surprised Lontz and her family with four tickets to Enchant along with backpacks filled with gifts for the family, KVVU-TV reported.

"We saw that video and honestly that was something that I’ve never seen before. And just appreciate your service to Amazon and really to your community," a representative from Amazon told KVVU-TV.