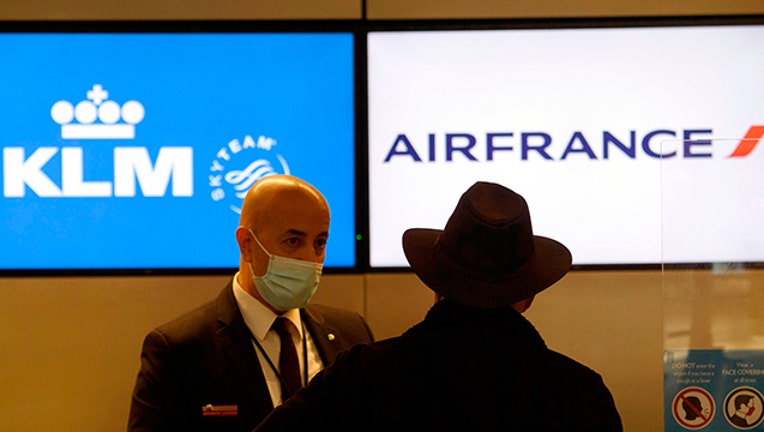 An employee wears a face mask as a passenger checks-in for a flight at a Air France and KLM counter.(File Photo by PATRICK T. FALLON/AFP via Getty Images)

PARIS - Air France-KLM is sending into the air what it calls its first long-haul flight with sustainable aviation fuel Tuesday. The plane is said to be using petroleum mixed with a synthetic jet fuel derived from waste cooking oils.

The company said the move toward sustainable aviation fuel or SAF is to support the creation of an industry that guarantees increasingly eco-responsible air transport. The jet is flying from Paris to Montreal, with a fuel mixture including 16% of sustainable fuel.

It's part of efforts by the industry worldwide to experiment with alternative fuels as regulators and governments tighten emissions rules for the coming decades. Other airlines and plane-makers are also experimenting with using varying levels of biofuels or different kinds of sustainable fuel.

It will, he said, "represent the majority of the CO2 emissions reductions achievable by the industry over the next several decades" and "is being supported by incentivizing policy in the U.S."

Andrew Murphy of Brussels-based environmental advocacy group Transport and Environment said that "it’s good that they’re experimenting, it’s important that the industry is experimenting" with this as the world appears to be coming out of the pandemic and travel resumes.

Air France-KLM claimed to make the first regular flight with synthetic sustainable aviation fuel in February, from Amsterdam to Madrid.