NEW YORK - New York authorities rushed to bring in an army of medical volunteers Wednesday as the statewide death toll from the coronavirus doubled in three days to more than 1,900 and the wail of ambulances in the otherwise eerily quiet streets of the city became the heartbreaking soundtrack of the crisis.

As hot spots flared around the country in places like New Orleans, Detroit and Southern California, the nation's biggest city was the hardest hit of them all, accounting for the majority of the state's deaths, with bodies loaded onto refrigerated morgue trucks by gurney and forklift outside overwhelmed hospitals, in some cases in full view of passing motorists. And the worst is yet to come.

"I want answers. The answer is nobody knows for sure.”

“How does it end? And people want answers," New York Gov. Andrew Cuomo said. "I want answers. The answer is nobody knows for sure.”

Across the U.S., Americans braced for what President Donald Trump warned could be “one of the roughest two or three weeks we’ve ever had in our country." The White House projected 100,000 to 240,000 deaths in the U.S. before the outbreak is over, and Vice President Mike Pence said U.S. models for the outbreak show the country on a trajectory akin to hard-hit Italy. 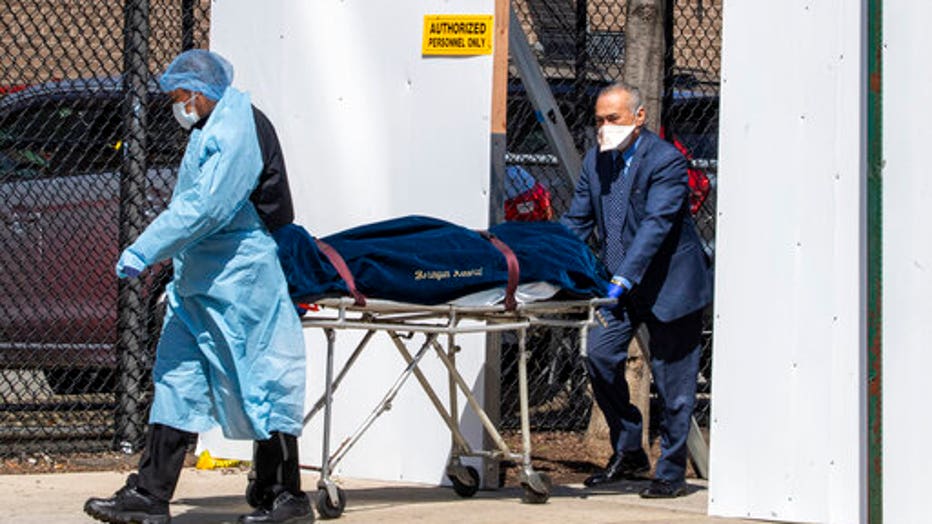 A funeral director and a Wycoff Heights Medical Center, employee transport a body, Wednesday, April 1, 2020, in New York. The new coronavirus causes mild or moderate symptoms for most people, but for some, especially older adults and people with exis

In New York, more than 80,000 people have volunteered as medical reinforcements, according to state officials. The group includes recent retirees who are willing to go back to work, health care professionals who can take a break from their regular jobs and people between gigs.

Few have made it into the field yet, as authorities vet them and figure out how to use them, but hospitals are expected to begin bringing them in later this week.

Health care workers who have hit the ground already, many brought in by staffing agencies, have discovered a hospital system becoming overwhelmed. Some patients from New York City have been transferred to Albany.

"It is a sight I never thought I would see. Patients are dying every day. Every single day."

“I have never seen so many human beings in an ER at one time in my entire life,” said Liz Schaffer, a nurse from St. Paul, Minnesota, who had her first shift Tuesday at Mount Sinai Hospital. “Shoulder to shoulder. It is a sight I never thought I would see. Patients are dying every day. Every single day.”

With New York on near-lockdown, the normally bustling city streets are so empty that a single siren, to some, is no longer easily ignored urban background noise. And now the city's playgrounds are closing, too, at Cuomo's order.

“After 9/11, I remember we actually wanted to hear the sound of ambulances on our quiet streets because that meant there were survivors, but we didn't hear those sounds, and it was heartbreaking. Today, I hear an ambulance on my strangely quiet street and my heart breaks, too,” said 61-year-old Meg Gifford, a former Wall Streeter who lives on Manhattan's Upper East Side.

“I think everyone’s just doing what they can, but at the same time it bothers you. Especially if you’re around Elmhurst, because you can hear all the ambulances, she said. "There is a truck and people are actually dying. It’s like a battlefield behind your home.”

The region rushed to set up extra hospital capacity at the mammoth Javits Convention Center, on a Navy hospital ship and in the indoor tennis center that hosts the U.S. Open.

Cuomo said projections suggest the crisis in New York will peak at the end of April, with a high death rate continuing through July.

For most people, the coronavirus causes mild or moderate symptoms, such as fever and cough. But for others, especially older adults and people with health problems, it can cause severe symptoms like pneumonia and lead to death.

NY Gov. Andrew Cuomo gave his daily update on the number of coronavirus cases in New York State. There are now 83,712 cases, an increase of 7,917 new cases.