The possible sway of former president Donald Trump and his hold on the GOP is also in the spotlight in many states.

Thirteen states are holding primaries in the month of May:

On May 10, Nebraska voters will pick nominees for governor and a new congressman, while two incumbent congressmen in West Virginia are facing off in a Republican primary after redistricting cost the state a seat in the U.S. House.

One thing to watch in both states is the sway of former president Donald Trump. Last week, his endorsement helped snag a Senate GOP nomination in Ohio for "Hillbilly Elegy" author JD Vance and could do the same this week for several candidates, too. 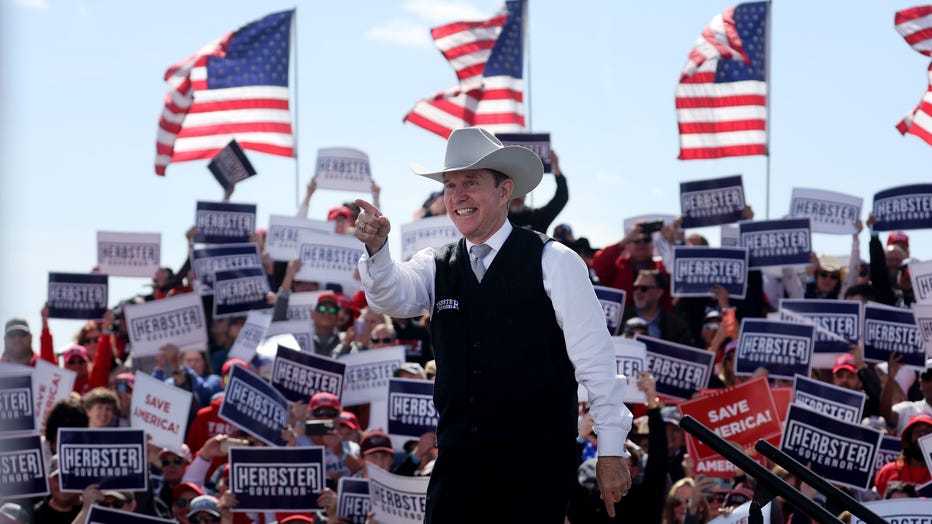 Nebraska gubernatorial candidate Charles Herbster speaks during a rally at the I-80 Speedway hosted by former President Donald Trump on May 01, 2022 in Greenwood, Nebraska. (Photo by Scott Olson/Getty Images)

In Nebraska’s race for governor, Trump has endorsed Charles Herbster, a wealthy agribusinessman and cattle breeder who has positioned himself as a political outsider. Herbster has been accused of groping multiple women.

Meanwhile, enthusiasm for Trump remains high in West Virginia, where he prevailed in every county in 2016 and 2020. Trump has endorsed incumbent Rep. Alex Mooney, who voted against President Joe Biden’s infrastructure bill.

Many are waiting to see how Trump’s endorsement affects the crowded race for the GOP gubernatorial nomination in the Cornhusker State.

Herbster’s main rival is a former college football player and veterinarian who owns a hog farm operation and swine breeding-stock company, Jim Pillen. And in a surprising twist, state Sen. Brett Lindstrom has risen to top-tier status as well, pitching himself as a "new generation" of leader. He is considered the more moderate option to Herbster and Pillen.

Herbster has recently faced allegations that he groped young women, including a Nebraska state senator and a former legislative staffer. He vehemently denies the accusations and has filed a defamation lawsuit against the lawmaker, state Sen. Julie Slama. She filed a countersuit, accusing Herbster of sexual battery. Despite the allegations, Trump has stood by Herbster and appeared with him at a rally last week.

The winner is expected to face Sen. Carol Blood, who is all but certain to win the Democratic nomination for governor over a little-known candidate who hasn't actively campaigned.

Nebraska also has an open seat in the U.S. House following the conviction and resignation of a former congressman, Jeff Fortenberry.

Fortenberry was convicted in March on charges he lied to federal authorities about an illegal campaign contribution he received from a Nigerian billionaire.

The GOP House race in West Virginia will be a test of loyalty to Trump versus infrastructure funding.

The race pits two incumbent congressmen against each other after redistricting cost the state a seat in the U.S. House. One congressman voted against President Joe Biden’s infrastructure bill — and won Trump’s support — while the other voted with Democrats.

Incumbent Rep. David McKinley was among 13 House Republicans to vote for the bill. He cited West Virginia’s "D" infrastructure grade from the American Society of Civil Engineers, saying it would have been a betrayal to vote based on "party politics" on an issue so important to residents.

West Virginia, one of the nation's poorest states, is slated to get $6 billion in infrastructure money.

Mooney voted against the infrastructure bill and won Trump's endorsement the day Biden signed the measure into law.

Mooney and Trump have called McKinley and other Republicans who voted for the infrastructure bill RINOs, or "Republicans In Name Only." Mooney called the bill "Biden and Speaker Nancy Pelosi’s spending masterplan" and said it will contribute to inflation.

While in Congress, McKinley and Mooney voted together the vast majority of the time. But the infrastructure vote will serve as a test of Trump’s clout in a state that wholeheartedly embraced him in two presidential elections.

This story was reported from Detroit. FOX Television Stations’ Austin Williams and The Associated Press contributed.