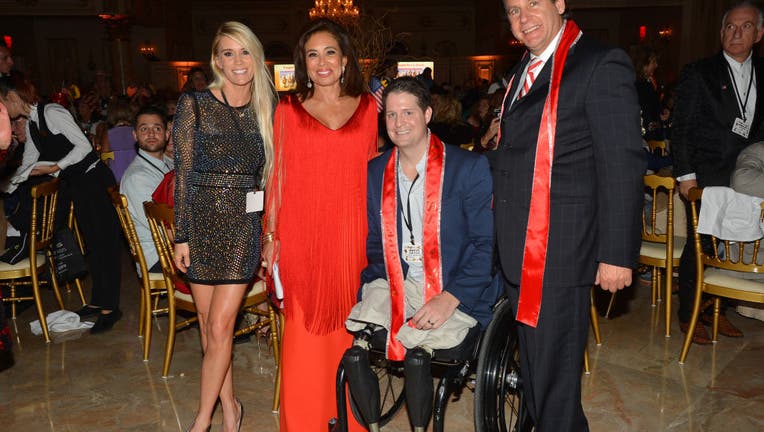 NEW YORK - The co-founder of the "We Build The Wall" project aimed at raising money for a border wall pleaded guilty Thursday to charges in a case that once included former President Donald Trump's adviser Steve Bannon.

Brian Kolfage admitted to pocketing hundreds of thousands of dollars while promising all donations would pay for the wall. His plea came a month before a trial in a case that began in dramatic fashion in August 2020 when Bannon was pulled from a luxury yacht off the coast of Connecticut and arrested on allegations that he and three others falsely promised donors that all donations would help build a wall on the southern border.

Bannon was pardoned by Trump just before he left office last year. Bannon had pleaded not guilty to charges that he pocketed over $1 million, using some of the money to secretly pay Kolfage, an Air Force veteran who lost both legs in a mortar attack in Iraq.

A guilty plea Thursday by codefendant financier Andrew Badolato in the case during the same remotely conducted electronic hearing before U.S. District Judge Analisa Torres in Manhattan meant that only one of the four defendants originally charged might go to trial in mid-May.

Plea agreements between the government and Kolfage and Badolato specified the defendants will not challenge sentences within an agreed-to guidelines range. For Kolfage, that range was four to five years. For Badolato, it was roughly 3 1/2 years to four years. Sentencing was scheduled for Sept. 6.

The organizers of the "We Build The Wall" group raised more than $25 million from thousands of donors as they repeatedly pledged that every dollar would be used for the project.

Asked to describe his crimes by the judge, Kolfage said the group had originally intended for all the raised money to be used to build a wall, but it "soon became apparent" that the plan to donate the money to the U.S. government for the wall's construction was not possible.

At that point, he said, they "induced donors to opt in to the new project" to build a border wall on private land by falsely representing that none of the donations would be spent on salaries or compensation to the fundraisers.

"I knew what I was doing was wrong and a crime," he said.

After he spoke, Torres asked questions, including whether he had promised the public that "100 percent" of the money would go toward building the wall.

"That is correct," he answered.

"Despite your promise, you made an agreement with others to keep a large sum of money for yourself," the judge said.

"That is correct," Kolfage answered.

Badolato said he engaged in the conspiracy from 2018 to 2020, agreeing to assure donors that all the money would go toward building the wall when he knew the statements were false.

"I knew this was wrong and I’m terribly, terribly sorry for what I did and I humbly beg the court for mercy," he said.

When the judge asked Badolato if he was aware that Kolfage was going to get money from donations, he said: "Yes I did and I helped facilitate it."

Assistant U.S. Attorney Nicolas Roos said evidence against the men at trial would have included testimony from donors, along with transaction records following donations into the defendants' bank accounts, emails and text records, along with public statements made by the coconspirators that were false.