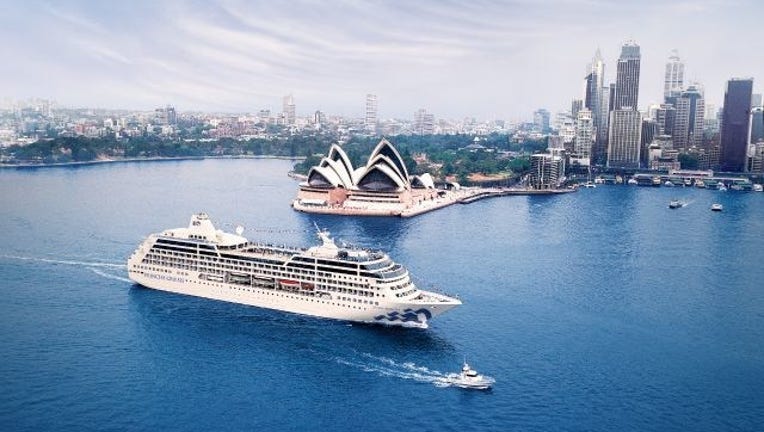 NEW YORK - Princess Cruises is kicking off its 111-day around-the-world voyage on Monday with about 670 guests and 375 crew members aboard the company's 592-foot Pacific Princess.

The completely sold-out four-month venture sets sail Monday at 6 p.m. PST from Port of Los Angeles and will return on May 11.

The Pacific Princess will tour 38 ports in 26 countries on five continents – covering 34,287 nautical miles during the cruise's lengthy trip. It will be the first time Princess Cruises will make stops at Kaikoura, New Zealand; Praslin, Seychelles Islands; Mayotte Island, French protectorate and Zanzibar, Tanzania during its world cruise, according to a press release.

To maximize time for passengers, the Pacific Princess will make 12 late-night stays to maximize time in popular destinations such as Melbourne, Australia; Papeete, Tahiti and Phuket, Thailand. There will also be an overnight port in Cape Town, South Africa. A total of 20 UNESCO World Heritage Sites will be toured throughout the trip.

Unlike the much longer 245-day Ultimate World Cruise by Viking Cruises that costs a whopping $92,990 per person, the 2020 world cruise by Princess Cruises is more affordable at a starting price of $22,999 per person – although it requires passengers to be OK with getting 134 days fewer at sea.

Previous guests of Princess Cruises get to save up to $1,000 per person, according to the company's release.

"We've been offering World Cruises since 1998 and our team of destination experts knows how to create the best worldwide itineraries like no other in the cruise industry," said Jan Swartz, president of Princess Cruises. "Our Captain, officers and crew regularly hear from guests the impact the World Cruise has on them, as they share their appreciation for taking them to places they never in a million years thought they would experience."

Roomy suites provide a comfortable stay during Princess Cruises' 111-day voyage around-the-world. (Princess Cruises)
In total, there will be 67 at sea days during the 2020 world cruise, however, the Pacific Princess is outfitted with 11 decks that have much to offer, including seven dining areas, two lounges, three bars, one casino and pool as well as a fitness center and spa.

UFO CRUISE IS HERE TO HELP YOU FIND THE TRUTH

For cruisers that missed out on booking this globetrotting trip, Princess Cruises is currently booking for its 2021 world cruise – which will debut its 965-foot and 15-deck Island Princess. The larger vessel can hold up to 2,200 guests and 900 crew members, and it even has a wedding chapel on board in case any passengers decide to get hitched during their stay.

Both coasts are covered for the next New Year, with an Island Princess sailing from Fort Lauderdale on Jan. 3 and Los Angeles on Jan. 17. Princess Cruises' website says an interior room starts at $20,999 per person.

DEA seized a woman's bag of cash at an airport; it was her dad's life savings

Terry Rolin is a 79-year-old retired railroad engineer. For years, he squirreled away whatever extra cash he had. But rather than put it in a bank, he hid it in a box in his basement. Now it is gone. It wasn't stolen. The federal government took it all and intends to keep it. Here is why.