New polls show that the race for governor of New York is closer than the Democrats would like. Republican Lee Zeldin is closing in on Democrat Kathy Hochul.

NEW YORK - With only three weeks before Election Day 2022, Democrat Kathy Hochul only has a slight lead over Republican challenger Lee Zeldin in the race for New York governor, according to a new poll.

Hochul's chances of winning on Nov. 8 appear to be getting a little more difficult, according to Basil Smikle, a Democratic strategist and the director of the Public Policy Program at Hunter College.

"It should be a bit concerning," Smikle said.

"In the blue state of New York, the race for governor is competitive," Quinnipiac University Polling Analyst Mary Snow said. "Democrats have cruised to victory in gubernatorial races since 2006, but Governor Hochul's narrow edge puts Republican Lee Zeldin well within striking distance of her."

Hochul leads in New York City 59%-37% but the race is very tight in the suburbs with Zeldin receiving 50% and Hochul receiving 49%.

Asked to choose the most urgent issue facing New York State today, crime ranks first among likely voters at 28% followed by inflation at 20% and protecting democracy at 14%.

Zeldin has made crime a major issue of his campaign and has using high-profile crimes in New York City as backdrops for delivering his message.

"Clearly the trend lines are not good for the governor and it provides a lot of hope for the Zeldin campaign," Kean University provost David Birdsell said. "People's perception of their own vulnerability to crime has been going up in New York as it has been in many states."

Republicans across the country have also made crime an issue on the campaign trail.

"There has been a declining trend for support for Democratic candidates across the board in the U.S. over the course of the last two weeks," Birdsell said. 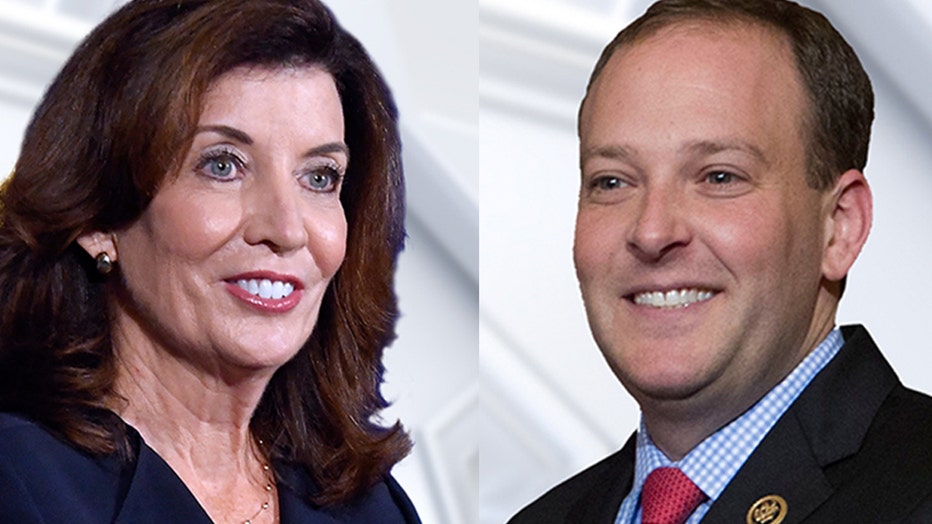 A Siena College Poll also released on Tuesday shows Hochul leading the race 52%-41%, which is down from a 17-point lead in September.

A Marist College poll less than a week ago showed Hochul leading Zeldin by 10 points among likely voters.

Hunter College's Smikle said he believes Hochul will ultimately squeak by with a victory but that is not the case for many other Democrats nationwide, particularly in congressional races.

"There are really concerns among Democratic insiders that they don't necessarily have the legs to close this out," Smikle said.

"Despite $8 million in outside spending from right-wing groups pushing baseless lies, Governor Hochul maintains a double-digit lead against her opponent. Even in today's Quinnipiac poll, which substantially undercounted Democrats, Governor Hochul continues to receive support from fifty percent of New Yorkers and we are confident in our ability to turn out voters in every community. With just three weeks until Election Day, the governor isn't taking anything for granted and will continue to contrast her strong record of results with Lee Zeldin's MAGA agenda."
—Jerrel Harvey, campaign spokesperson