Another round of winter weather is moving across the United States, this time threatening the deep south before moving up the east coast.

According to FOX Weather, frozen precipitation will reach Arkansas on Saturday, then move east towards Georgia and the Carolinas later in the weekend. Snow is expected to spread southward through the day into portions of southern Missouri, southern Illinois, western Kentucky, eastern Kansas, eastern Oklahoma and northern and western Arkansas.

Nighttime will usher in an increased risk for sleet or freezing rain to mix over portions of Kentucky and Tennessee, which could mean ice.

On Sunday, experts are predicting snow will move from Kentucky and Tennessee into the Appalachians from the North Georgia mountains to West Virginia and parts of Virginia. Northern parts of Mississippi and Alabama could also see some snowfall.

Significant icing is expected for portions of this region, particularly in the Carolinas and northeastern Georgia between the Interstate 95, Interstate 85 and Interstate 20 corridors.

On Friday, Georgie Gov. Brian Kemp declared a state of emergency ahead of Sunday’s potential snowfall. He encouraged Georgians to "plan accordingly" and stay updated on the forecast, FOX5 Atlanta reported.

"By being ready and knowing what to do in the event of winter weather, you can help us minimize risk, reduce the time it takes to recover, and most importantly keep everyone safe," Kemp said during a press conference Friday afternoon. 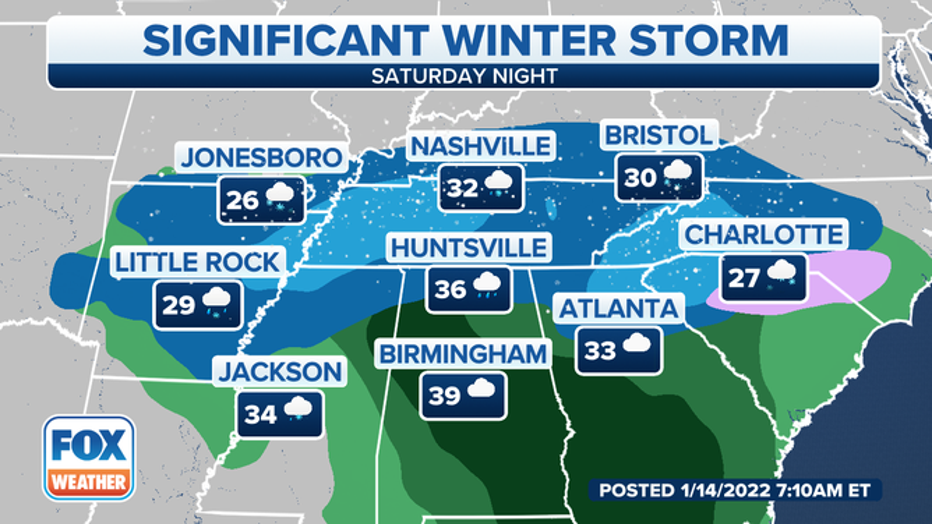 Winter weather is moving across the U.S. this weekend, threatening the deep south before moving up the east coast. (Source: FOX Weather)

"We expect this storm to have a significant impact in many parts of Virginia," Governor Northam said. "Declaring a state of emergency now allows our emergency responders to prepare, and to move supplies and equipment where they expect to need them the most. This also gives Governor-elect Youngkin the ability to respond to any storm needs swiftly. I urge Virginians to take this storm seriously and make preparations now."

The Northeast Seaboard will greet the storm later into Sunday. Overnight, the snowfall is expected to change into rain as milder air comes onshore from the Atlantic.