Now bee farmers in the Pacific Northwest are thinking out of the box to save the bees.

This week is National Pollinator Week. It's time to give thanks and reflect on the tireless service that bees, birds, bats, butterflies, moths, flies and many more animals perform every spring and summer. But why?

Why do pollinators deserve a week?

The U.S. Senate passed a resolution in 2007, designating National Pollinator Week the third week of June to "recognize the importance of pollinators to our ecosystem health and agriculture... and increase awareness… and support for protecting pollinators…"

FOX Weather says to take a look at the dining table – pollinators are a key in producing healthy, affordable food choices worldwide.

"Declines in the health and population of pollinators pose what could be a significant threat to global food webs, the integrity of biodiversity, and human health," states the resolution.

Pollinators are responsible for about one of every three bites of food consumed in the U.S. decreed the Senate. Almonds, strawberries and blueberries are obvious examples.

"It's in the region of a million and a half hives," Mathew Shepherd, Director of Outreach and Education for the Xerces Society, explained how many bees farmers need to pollinate just California’s almond crop. "And they need to be in the almond orchards for just a few weeks at the right time of year. Then they disperse, and they go to other crops across the country like apples and pears and cherries." 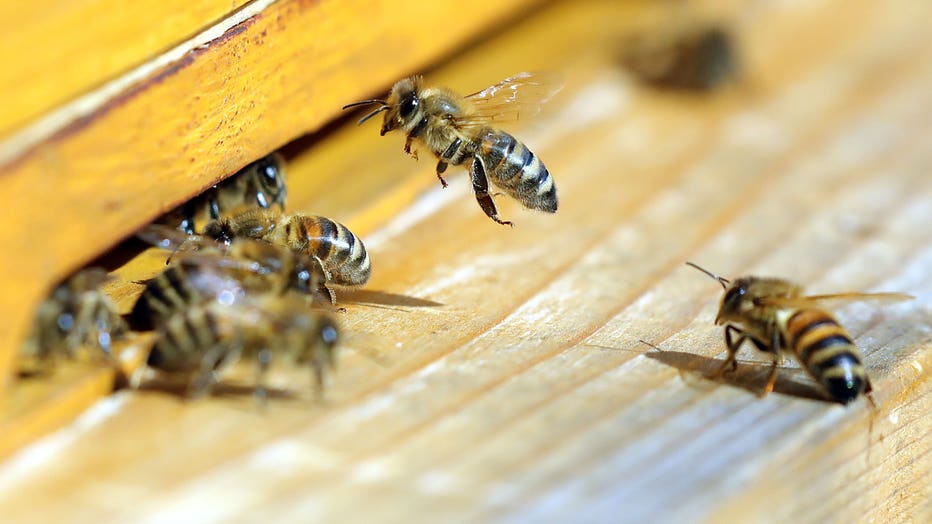 California produces 80% of the world’s almonds. The nearly $6 billion industry employs about 104,000 Californians. And, 91% of the farms are family-owned, according to the Almond Board of California.

Not so obvious examples of pollination products are beef and milk. Some herds graze on bee-pollinated alfalfa and clover.

"It's estimated that bees provide a $56 billion service in terms of pollinating our crops," said U.S. Department of Agriculture Research Ecologist Susannah Lerman. "A lot of the focus has been on honeybees, but our native bees are also performing really heavy loads of pollination services… If we want to eat, we need bees."

Domestic honeybees alone pollinate $14.6 billion worth of crops annually produced on over 2 million acres, the resolution stated in 2007.

Sheppard said about 75% of food crops and 90% of all flowering plants are insect-pollinated. 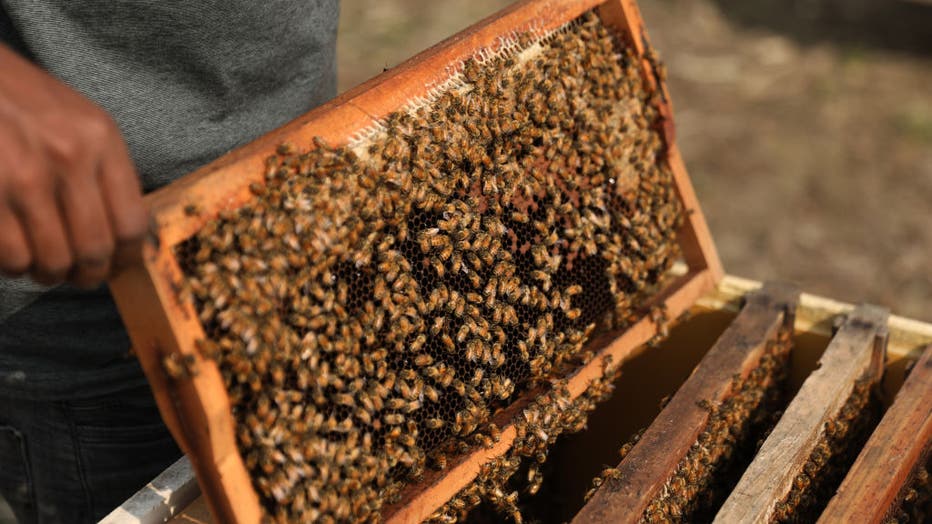 Bees on the decline

But both non-native honeybee and native bee populations have declined recently.

"There was always some loss of their colonies, but these days they're losing 35% or 40% of colonies each year, according to some of the surveys," said Sheppard about commercial honeybees, originally from Europe.

The native bees, who would need to pick up the slack, are dwindling as well. Almost 40% of pollinating insects face extinction, according to a United Nations-sponsored report.

"Here in the U.S. we have about 3,600 species of native bees…and somewhere around a quarter of those are facing extinction," said Liz Robertson of the Xerces Society for Invertebrate Conservation of populations like the American bumblebee. "If we do the things that we know can help these populations rebound I really do have hope for the future."

FOX Weather’s Max Gorden recently visited an Oregon blueberry farm depending on both the native and honey bees for its livelihood. The owner trucks in honey bees. Taking no chances, he also planted native plants like wild roses across the property to lure more native bees year-round. Gorden found a farmer changing the way he does business to prevent the America's bumblebees from going extinct.

The farmer works with the Xerces Society, through their Bee Better program, to make the farm more enticing and sustaining to and for bees. A/C Food’s Halls Ferry Farm in Willamette is Bee Better Certified. Look for the seal on grocery products.

Surrounding wild lands also benefit. Xerces states that fruits and seeds pollinated by insects make up the majority of 25% of all birds and mammals like the threatened grizzly bear.

How can we celebrate Pollinator Week?

Several buildings are being illuminated yellow and orange to support the pollinators but to bring the celebration to your house, think about planting pollinator-friendly plants in your yard.

Garden stores sell bee houses and sometimes even native bees. For those less adventurous, look into switching to organic pesticides and herbicides. Take a look at some activities planned around the U.S. this week on Pollinator.org.