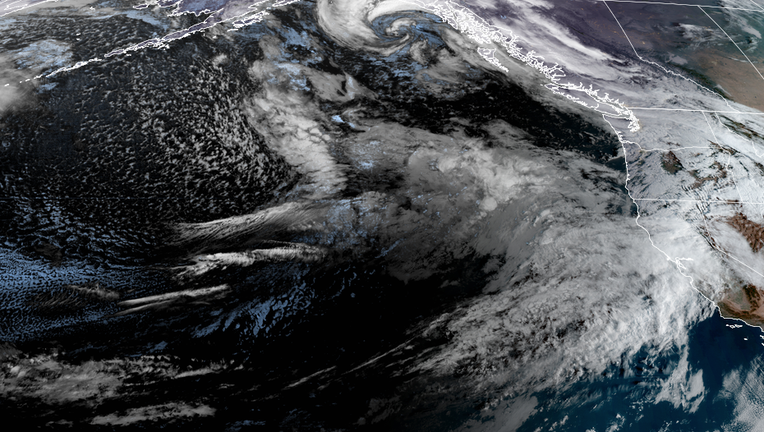 GOES-17 Satellite imagery shows a weather system in the Pacific Ocean about to undergo rapid development.

SEATTLE - A system in the western Pacific Ocean that was once Tropical Storm Namtheun last week is now expected to put on quite a show as its journey across the ocean nears the U.S. West Coast, and it turns into what's known as a "bomb cyclone."

But despite the sensational name, the storm will only have minor impacts on the Pacific Northwest, keeping its wrath far out to sea.

Earlier Wednesday, the storm began a process known as "bombogenesis" -- defined as when a center of low pressure rapidly strengthens by a drop of at least 24 millibars in 24 hours. Once the storm has achieved the feat, it's known as a "bomb cyclone."

This storm will easily qualify, with some forecasts showing a drop of more than 40 millibars.  Wednesday morning analysis has this storm at 1001 millibars and is forecasted to drop to around 955 millibars by Thursday morning as the remnants of the tropical storm interact with a robust jet stream, supercharging its development and it will appear quite impressive on satellite imagery as it does so.

Those pressure readings would put the storm's center pressure equal to a strong hurricane had it been a tropical system. However, it's important to remember that while this is like a tropical system, there are no tropical characteristics, meaning that it does not strengthen or organize like tropical systems typically do.

Nonetheless, some forecasts show potential wind gusts around the heart of the storm, reaching 100 mph.

"Bombogenesis is fairly common in the Pacific Ocean region because there is enough water surface area for strengthening. It has happened a few times on the Atlantic coastline; however, it is not as common there," said FOX Weather Meteorologist Stephen McCloud. "Forecasting this phenomenon is rather difficult to do especially when there are changes in forecast model runs. Most of the time, this happens in real-time situations. It is easy to pick out, especially on the satellite imagery when you see bombogenesis occur."

A storm of that strength making landfall along the West Coast would cause significant and widespread damage with high winds. But there is good news is after the storm undergoes bombogenesis Thursday, it will weaken and head north, staying well offshore.

That path will keep it far enough from land to cause any significant wind issues. The storm's cold front will eventually sweep through Western Washington late on Thursday, bringing perhaps a half-inch to an inch of rain around the Seattle area with wind gusts to 25-35 mph -- routine for mid-October.

There is still plenty of active weather behind that system as the jet stream has lined up a parade of storms to move across the Pacific Ocean and into the Northwest. However, at this point, none of them look to have any significant impacts.