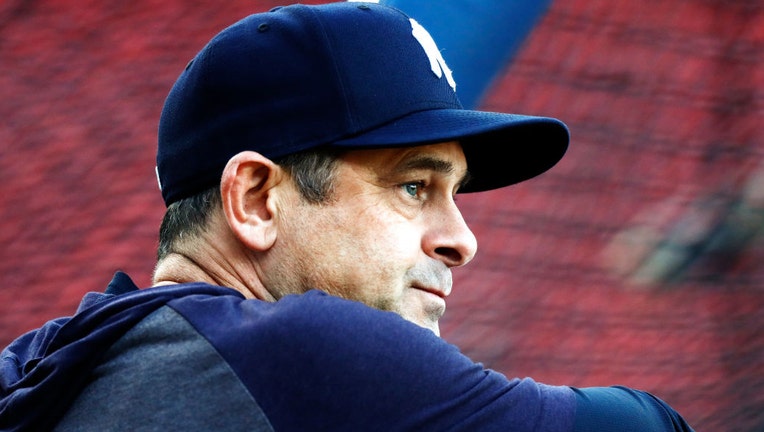 NEW YORK - Manager Aaron Boone was re-signed by the New York Yankees to a three-year contract with a club option for 2025 after four winning but unsuccessful seasons.

Boone, a third-generation major leaguer who hit a pennant-winning home run for the Yankees in 2003, led the team to a 328-218 record and four postseason appearances but just one AL East title.

The Yankees remain without a World Series appearance since winning the 2009 title under manager Joe Girardi — in the last full season before owner George Steinbrenner’s death. Boone was hired by general manager Brian Cashman and Hal Steinbrenner, who succeeded his father as controlling owner in November 2008.

"We have a person and manager in Aaron Boone who possesses the baseball acumen and widespread respect in our clubhouse to continue to guide us forward," Steinbrenner said in a statement Tuesday. "As a team and as an organization, we must grow, evolve and improve. We need to get better. Period. I know Aaron fully embraces our expectations of success, and I look forward to drawing on his intelligence, instincts and leadership in pursuit of our next World Series championship."

New York was Major League Baseball’s streakiest team this season, with winning runs of 13, seven and six games, and two each of five and four, but also skids of seven, five and four of four.

Even after in-season moves to add Rougned Odor, Anthony Rizzo and Joey Gallo, Yankees left-handed batters were last in the majors with a .207 batting average, 26th in home runs with 53 and 28th in RBIs with 148. Their righties hit .249 with 169 homers and 518 RBIs.

A viral video of a woman and several young Red Sox fans heckling each other has gone viral.

Boone, 48, was an ESPN broadcaster and had never managed when he was hired by the Yankees. He was among six people interviewed for the job and won out over Yankees bench coach Rob Thomson, former Cleveland and Seattle manager Eric Wedge, San Francisco bench coach Hensley Meulens, Los Angeles Dodgers third base coach Chris Woodward and former Yankees outfielder Carlos Beltrán.

Boone was a big league third baseman from 1997-2009 and an All-Star in 2003, when New York acquired him from the Reds at the trade deadline. His 11th-inning home run off Boston’s Tim Wakefield won Game 7 of the AL Championship Series for the Yankees against Boston.

RELATED: Derek Jeter Hall of Fame enshrinement: 'I wanted to make all you behind me proud'