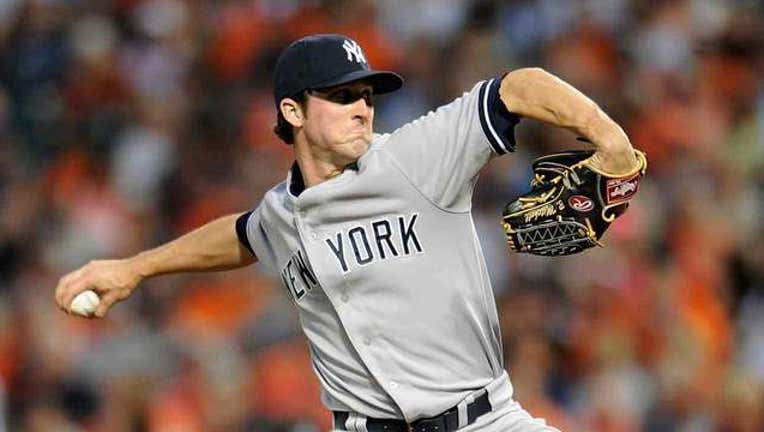 NEW YORK (AP) — Long after they saw starter Bryan Mitchell suddenly exit with a bloody face and head to the hospital, the New York Yankees were greeted with a most welcome sight: The rookie pitcher was back in the locker room after a late win.

Chase Headley hit a bases-loaded grounder in the 10th inning that Minnesota's five-man infield bobbled, and the Yankees, despite losing Mitchell to a line drive that caused a nasal fracture, beat the Twins 8-7 Monday night.

"It seems like your heart just drops into your stomach and you're scared for the kid and you see blood coming out. I was really worried, but he has a small hairline fracture in his nose and we're going to monitor him pretty closely the next 24 hours," he said. "But he's in the clubhouse and that's good to see."

Eduardo Nunez hit the liner that injured Mitchell in the second inning. In a game that took over 4 hours, Nunez bobbled the grounder that drove in the winning run.

Brian McCann homered, drove in five runs and sliced a double off left fielder Eddie Rosario's glove in the 10th that set up the winning misplay. The catcher also threw out three runners trying to steal.

Like the rest of the Yankees, he was thinking about the 24-year-old Mitchell, who made just his third major league start.

"He just tried to get out of the way and luckily what could have happened didn't," McCann said.

Added Yankees outfielder Brett Gardner: "I saw him here after the game for a minute and it seemed like he was doing fine."

Rookie Greg Bird doubled and the Yankees loaded the bases with no outs in the 10th against Glen Perkins (1-4). Twins manager Paul Molitor took out right fielder Torii Hunter and added an extra infielder — the strategy was good, his team's fielding wasn't.

Headley hit a hard grounder up the middle to Nunez, who had been playing shortstop. Nunez fumbled the ball and by the time he recovered, he had no chance for a forceout at the plate.

Andrew Miller (1-2) got the victory as the AL East-leading Yankees started a season-high 10-game homestand with their third win in four games.

The Twins, contending for a wild card, lost to begin a 10-game trip that also will take them to Baltimore and Tampa Bay.

Knocked to the ground, Mitchell left with a towel over his bloody face. He was taken to a hospital and released.

The Yankees will monitor him for the possibility of concussion symptoms.

"I get goosebumps talking about it," Molitor said. "You're playing the game, and then you see someone go through something like that."

"I know they've talked about trying to find that protective cap for pitchers. They haven't come up with anything that looks very practical as of yet. The face is pretty much something that's going to be unprotected, no matter what you do," he said.

Carlos Beltran hit a tying two-run homer for the Yankees in the sixth. New York loaded the bases with one out in the seventh, but reliever Casey Fien got McCann on a popup and fanned Beltran.

Rookie Miguel Sano, Trevor Plouffe and Aaron Hicks homered for the Twins. Brian Dozier singled his first three times up, and then struck out after a long foul that umpires reviewed to be sure it wasn't a home run.

McCann hit a three-run homer in the first off Kyle Gibson and had a two-run single in the third that made it 5-all. McCann has enjoyed tremendous success in the first inning this season — in those at-bats, he is 17 for 35 with six home runs and 28 RBIs.

Bird, in the game after Mark Teixeira injured himself on a foul, opened the 10th with a double. He made it to third on McCann's double and Beltran was intentionally walked.

Yankees: 1B Teixeira fouled a ball off his lower right leg and exited with a bruise, with Bird taking his place. X-rays were negative. "Right below the knee, just a bad spot," he said. "Hopefully, it feels better tomorrow but it hurts to put any pressure on it right now." ... RHP Michael Pineda, on the DL since July 30 with a forearm strain, threw 42 pitches Sunday at Double-A in his first rehab start. Girardi said he's not sure yet on Pineda's next step.

Twins: RHP Mike Pelfrey (6-7, 3.70 ERA) had gone 10 starts without a win before beating Texas in his last outing. A former mainstay in the Mets' rotation, this will be his first start vs. the Yankees since 2011.

Yankees: LHP CC Sabathia (4-9, 5.23 ERA) starts a day after TMZ posted video of him getting into a verbal altercation with hecklers outside a nightclub in Toronto over the weekend. He certainly has throttled Joe Mauer — the Twins star is just 8 for 47 (.170) vs. the big lefty and has struck out 19 times.

Frank Sinatra Jr. sang the national anthem at the ballpark where his father's "New York, New York" still plays after games. Four months shy of what would have been the 100th birthday for Ol' Blue Eyes, fans were given free downloads of his music.